The thing about real-time GNSS surveying, however, is that “rover expertise” needs to be applied in the field (not the office). Additionally, many factors involved with GNSS signalization, as well as with the RTN itself, require basic knowledge in order to achieve the required accuracy.

An experienced surveyor recently asked me, “Can I achieve 0.02’ accuracy from an RTN?” Well, “can” and “will” are two different words.

First, in contrast to the earlier wild-wild-west days of RTNs popping up across the USA, today almost all RTNs are well managed by knowledgeable professionals, both at the coordinate/datums end as well as the all-important information technology (IT) end. As the reference station positions are monitored, the internal precision of the network is maintained at the millimeter level.

This is actually better precision than the national CORS network, which bumps around a couple of centimeters in daily solutions of its thousands of stations. However, as a realization of the National Spatial Reference System (NSRS), the national CORS are our source of geometric datum truth = accuracy. National datums unify positional and navigational data of all ilks and accuracies across the hemisphere. How the RTN aligns itself to this NSRS through the national CORS network determines how accurate it is (no matter its internal precision).

Regardless, the RTN coordinates will not, of course, be perfectly aligned to the datum and will most likely show centimeter-level residuals to any adjustment to the CORS network that uses more than one CORS. Additionally, if you look at the short-term plots (approx. 90 days) of any CORS station relative to the published IGS values, you can see how north, east, and “up” values (shown in a local geodetic topocentric frame) vary at one sigma (Figure 1).

For RTN station coordinates, NOAA’s National Geodetic Survey (NGS) has recommended a geometric alignment to the NSRS to 2 cm horizontally and 4 cm ellipsoid height. These statistical parameters should be easily achieved with adequate observational data on the RTN stations. 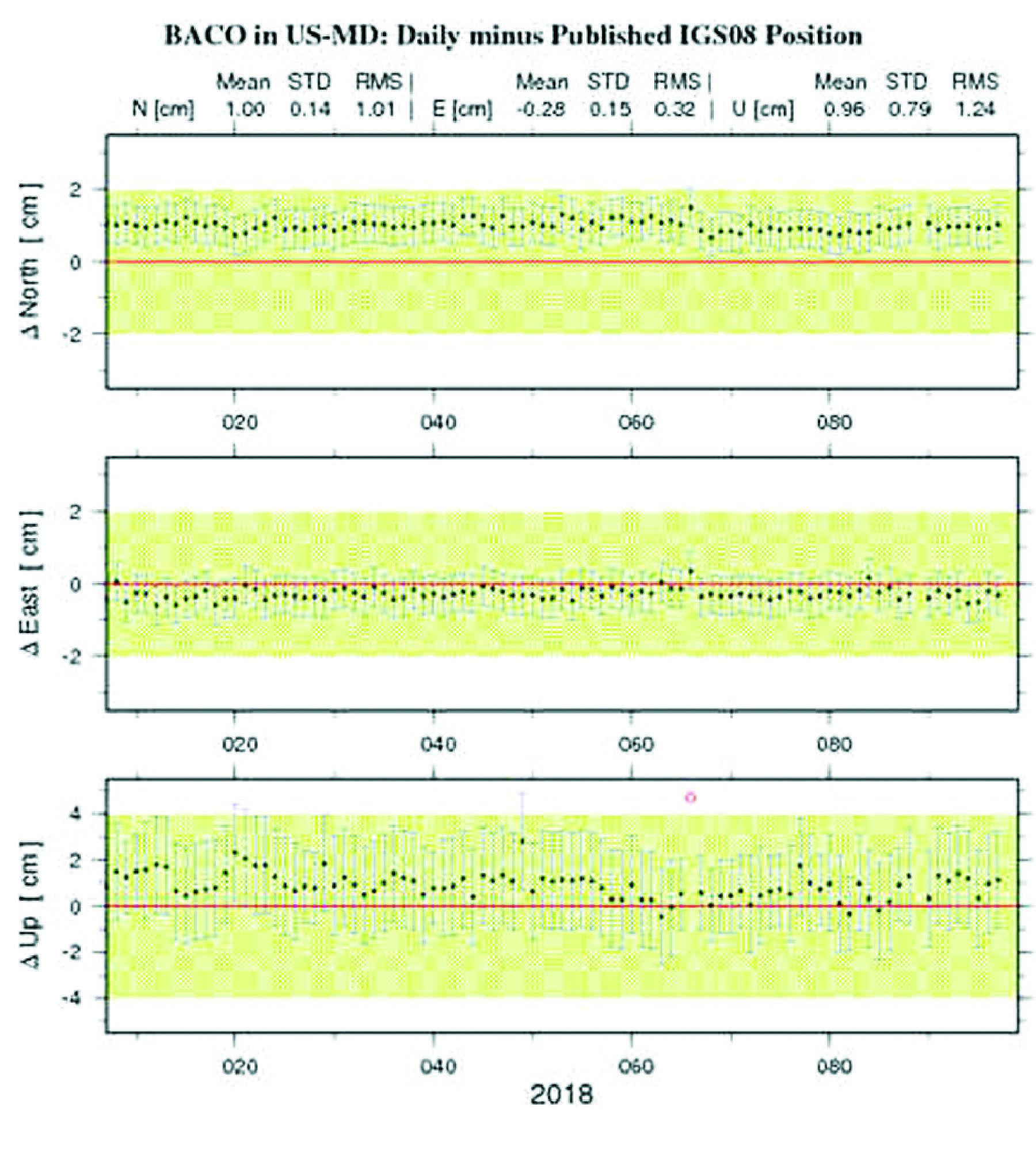 Aligning to the NSRS

Furthermore, with the new geopotential datum (NAPGD2022) allowing users only 1 cm ellipsoid height error to achieve the 2 cm orthometric height accuracy goal, it is apparent that RTNs will align even tighter to the national CORS, perhaps at around 1 cm in latitude, 1 cm in longitude, and 2 cm in orthometric height.

How does one know how a particular RTN aligns to the NSRS? As verification of an RTN station’s accuracy, NGS is developing a tool (beta stage at present) whereby RTN managers may voluntarily submit OPUS-DB (shared) positions of the RTN network stations using perhaps several days of observations.

These OPUS data are then plotted relative to the published geometric positions of the RTN stations (as published to their RTN subscribers) so you can easily view the deviation from published values to the datum values (Figure 2).

However, this reference station verification still leaves a necessary “proof in the pudding” to be done. (By whom?) Actual point positions produced by the RTN would still need to be checked against passive monuments that have been “recently” accepted into the NGSIDB (NGS Integrated Database) as high-accuracy geometric and hopefully, orthometric marks. 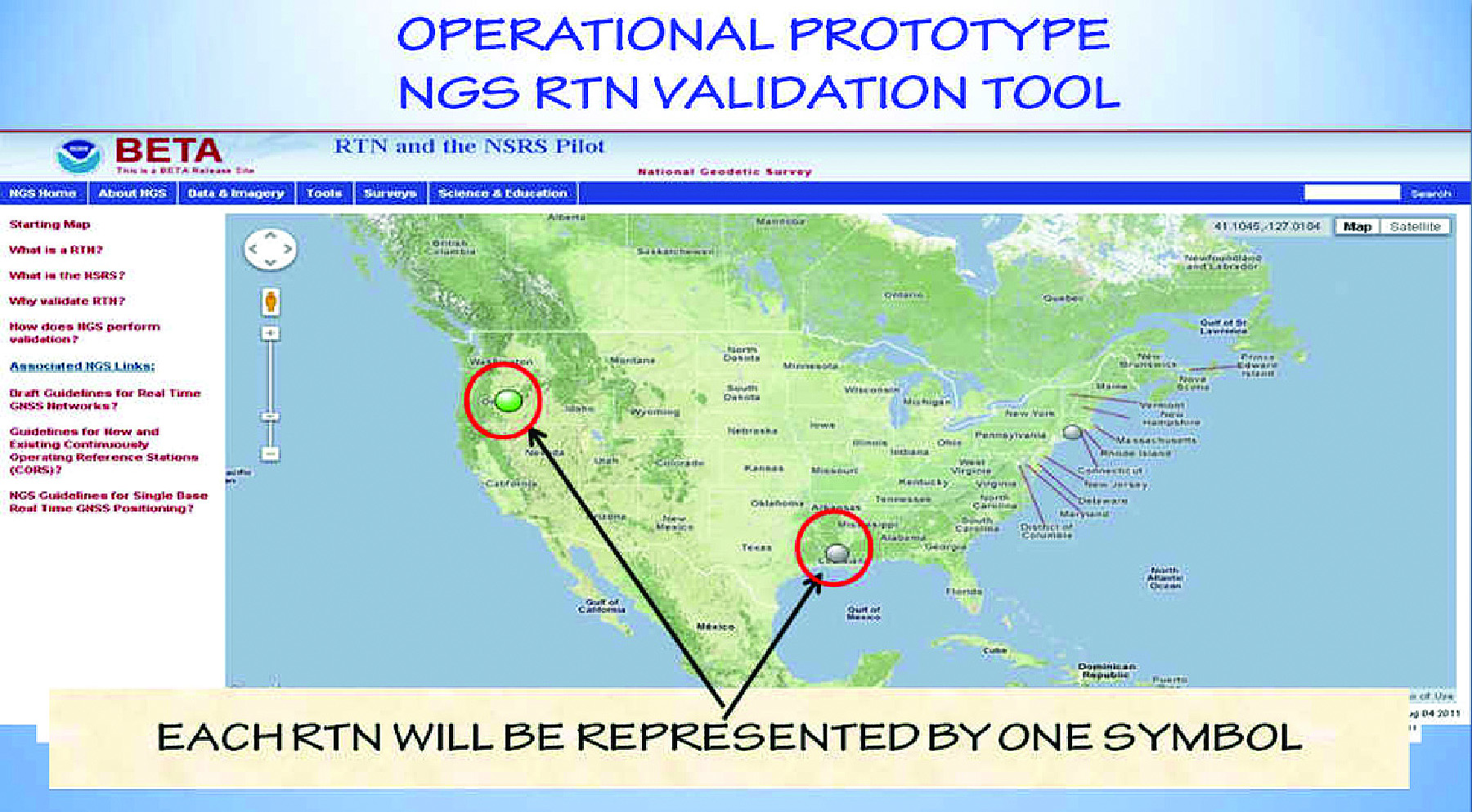 Two screens from the beta NGS tool for RTN station alignment to the NSRS. 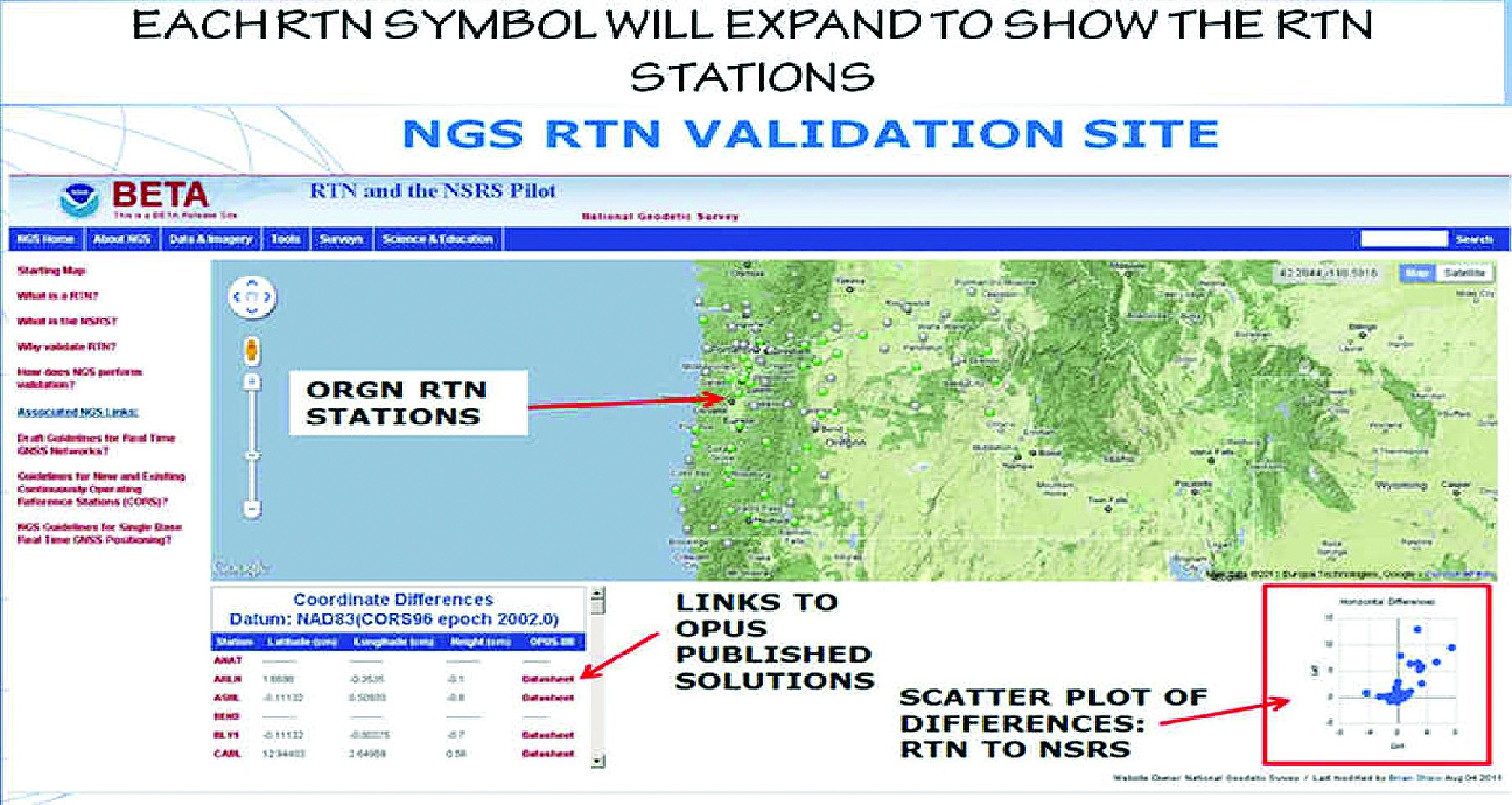 Users may expect RTNs operated by DOTs, statewide agencies, major GNSS manufacturers, GNSS marketing companies, and large municipalities to supply survey-grade horizontal accuracy that can be verified relative to the NSRS at any time. In other words, the results are repeatable and accurate. Because orthometric heights not produced from a localization rely on the user’s ellipsoid height accuracy and the quality of the local hybrid geoid model, survey-grade heights can be more of a challenge.

It will be interesting to see how accurate the RTN-generated orthometric height will be when the new datums are rolled out in about four years!

Next, it is obvious that any field observation will hold some error and thus be less accurate than the RTN itself. I believe that the correct field techniques (including redundancy and low multipath) will typically allow the user to align to the RTN (not necessarily the NSRS) within a horizontal error of +/- 1.5 cm and a vertical error of +/- 2.5 cm at 95% confidence, at any time.

The difference between a perfect alignment to the RTN and these errors are many and varied. Some considerations:

These considerations require further discussion beyond this article’s scope, but in general, many are mitigated through double-differencing techniques, dispersive multi-frequency techniques, Kalman filtering, wide and narrow landing, and correct field practices.

The big advantage of an RTN over single base real-time is interpolating errors to the point of the rover rather than using them as solely computed at the base.

Finally, it is evident that new RTN and user algorithms, new real-time user equipment, additional GNSS constellations, additional GPS signals, increased RTN sophistication in IT, station integrity management and optimal station spacing have all brought on GNSS positioning precision limited mostly to the hardware capabilities by the real-time gear—and of course also limited to the knowledge and experience of the user.

Two-hundredths of a foot accuracy to the datum? It’s possible, but no, it’s not to be expected. Still, with all the advantages of using RTN and with the new geometric and geopotential datums getting ready to be rolled out by NGS, RTNs are a great link to the NSRS.

Recall that surveyors will be accessing the new NAPGD2022 vertical datum, as well as the NATRF2022 geometric datum, directly with GPS—something they can accomplish in real-time if they utilize an RTN, which has done all the hard work of aligning to the new datums (Figure 3). 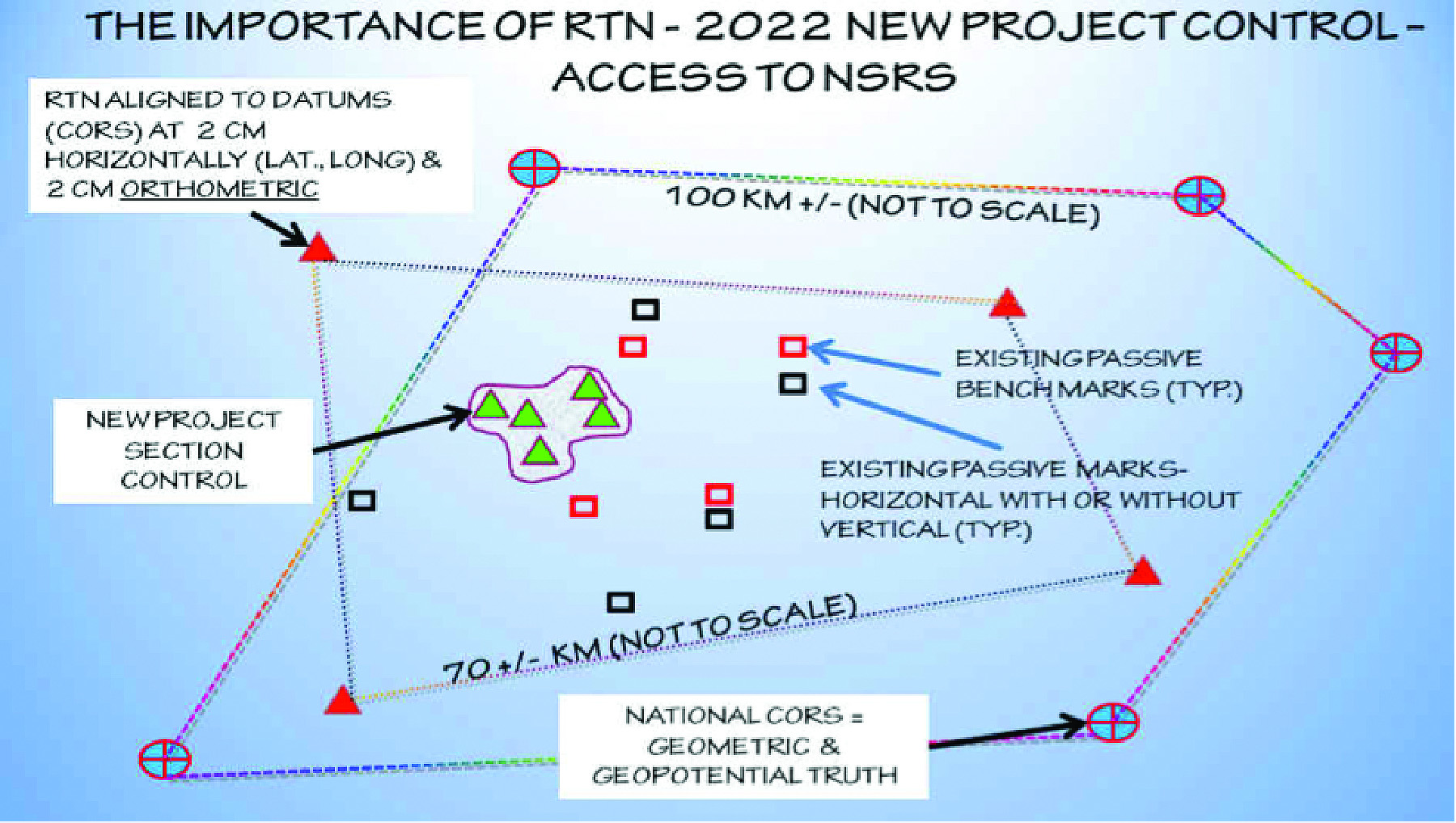 RTN as a tool to access the new 2022 national datums.