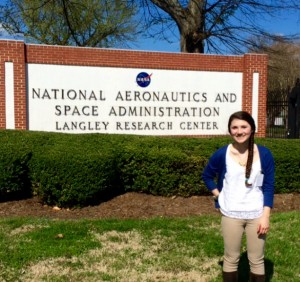 Morgan Ré attends both governor’s school and high school in Virginia; she’s on track to graduate with an associate’s degree in May before graduating high school in June 2015. She’s been interested in working for NASA since sophomore year when she began at Virginia Space Coast Scholars. Since then she’s participated in Virginia Aerospace Science and Technology Scholars (VASTS) as well; while at the VASTS summer academy in July she helped plan a crewed mission to Mars.

This past summer Morgan interned at Langley Air Force Base where she assisted two NASA scientists as they initiated a series of photogrammetric tests aimed at certifying a Phantom Micro M 100 high-speed camera and its waterproof enclosure for use in water-impact testing.

In her free time, Morgan participates in the program Destination Imagination that focuses on problem solving using teamwork and creativity. She also takes lessons in aerial trapeze, which, at the moment, is the closest she can get to anti-gravity.