No matter what flavor of GIS you roll, there is no ignoring the annual Esri user conference in San Diego. The highlight is the opening plenary session which is always given by the (co) founder of Esri, none other than Jack Dangermond.

To discuss this fully, we have to start at the beginning, which was nearly a year ago when the xyHt team got together with a simple idea: How cool would it be to get someone who had been using Esri GIS for almost two decades to interview Esri co-founder and president Jack Dangermond? It was a daunting thought but one that I couldn’t refuse! Although I have used the software over the last couple of decades and talked with the developers, directors, and even engineers, I had never been to the user conference, let alone met any of these people in person.

At the same time, another development was occurring. You see, I had raised a request on the Esri GeoNet forum to say that ArcGIS Pro was missing the “Batch processing tools” which were readily available and popular in ArcMap and ArcCatalog. Little did I know that there were so many other users of ArcGIS Pro who felt the same. When Esri contacted me during version 2.0, there were over 750 people saying this feature needed to be put in.

Over the course of the year leading up to the user conference I had many emails and chats with Esri developers about how the batch processing could work, and the main idea fell around iterators that I didn’t think that any casual user would use. So, there was more debate and discussion, whereby I insisted it should be as accessible as it is in ArcCatalog and ArcMap (none of this iterator stuff). But it all just disappeared, and I assumed it was over.

Then three months before the user conference I got a call from Esri that asked if I would do some user testing for them. How could I say no?!

If you, too, have never been to the UC before, it’s at the San Diego conference center, the same venue where they host the San Diego Comic Con, and although San Diego is a big place, all the cool stuff is a little walk away. I was lucky to have xyHt to book my hotel, which they booked just over the water in Coronado. To those who don’t know San Diego, around the conference centre (SDCC) is crazy; it is everything you expect a thriving busy urban center to be, but a short ferry journey away (direct from the conference center) you can get to Coronado, a quiet but beautiful island that has miles of beach and amazing views of the San Diego skyline. 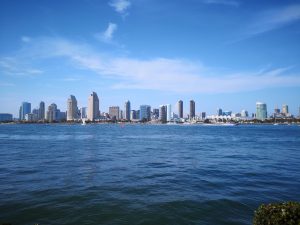 View of the San Diego Convention Center from Coronado Island.

Now here is something they don’t tell us newbies to the conference. Not only can you register on the Sunday but also there are little sessions and talks on at the Marriott next door to the SDCC. I was lucky to catch a few talks on BIM and GIS as well as some talks on satellite imagery, but the big tip here is that a lot of the Esri legends are there. I just casually bumped into Dawn Wright (Esri chief scientist and xyHt contributor), and noteworthy geospatial community celebrities Joe Kerski, Adam Carnow, and Mike Gould.

It’s all about Monday though, and it is just as large and impressive as you expect it to be. As you arrive at the SDCC you realize the enormity of the venue and are overwhelmed by the amount of people walking past you looking to register or get a good seat. Luckily, I arrived with a couple of minutes to the start and was told I had a “special” table near the front.

In the dark I walked around for 10 minutes before finding out that the “special” table was about 10 rows back, behind the cameras, so I apologize for not having any good photos. Of course, Dr Dangermond is the master showman; he engages the crowd with their pieces of work and then gets everyone interacting and responding to the improvements which Esri are constantly adding to the software. It is almost akin to being in church, with the crowd hanging off every word that is uttered.

The plenary ends and, although it is almost three hours long, it has whizzed by, and everyone heads into the Gas Lamp district, across the road, for something to eat. As you walk down the road you are sure to spot a GIS legend here or there, as all the eateries have outside seating.

After lunch the sessions start, and you need to make sure that you have a map of the complex with you as the place is HUGE; there are sessions all over, and I missed one or two as I struggled to find the rooms among the giant maze. 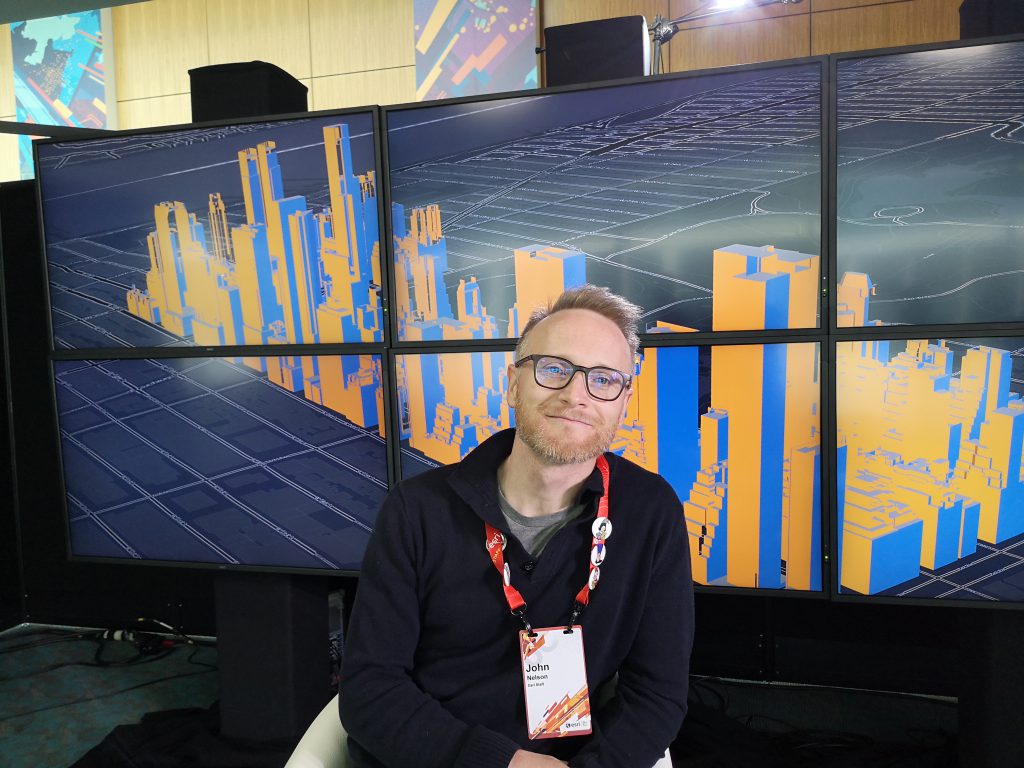 Randomly, on my way to a session on Monday I pass a familiar face and say “hi.” it turns out to be cartography legend John Nelson, the man behind the firefly style and paper styles which Esri have posted so much about. What makes the Esri UC so great is that these people will stop and say “hi” back. In fact, I was supposed to interview John but it ended up being a long chat about what he does, how his kids are, and how he puts up with Ken Field (I might share this later).

Tuesday comes around and it is all about the expo. There is a huge exhibition hall, and it is rammed full of stands and Esri “areas” where you can drop in and ask questions or play with the latest updates or toys. There are still LOTS of sessions going on all around the SDCC, and you find yourself going to sessions and then meeting up with people in the expo for two minutes before heading off for another session or meeting. To put things into focus, my Fitbit told be I did over 40,000 steps on the Tuesday! 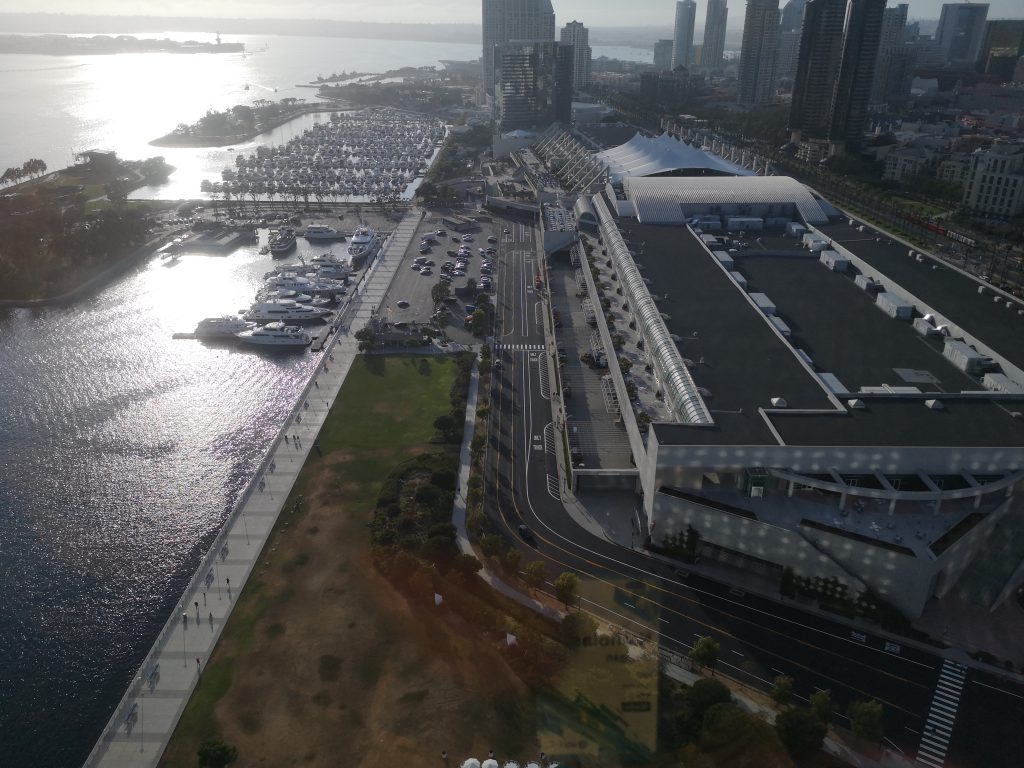 For me, Wednesday was all about interviews. There are still hundreds of sessions going on as well as the exhibition and also a huge room where they hold a “Map Gallery” with all the Esri users maps on display, but I digress. Back to the interviews, and Wednesday morning brings the biggest interview of my life. I am given 15 minutes with Dr Jack Dangermond. What do you ask one of the biggest tech owners of modern times? Is there anything that hasn’t been asked? Surely he is bored of talking about the software constantly. Good news is that I managed to get near to an hour in the end!

Although he arrives on the Monday and works flat out for the whole week (you constantly see him talking with people), he is incredibly fit and energized for someone in their 70s; it really is inspiring. You’ll have to look out for the interview in a future episode of xyHt, for there is more to tell than I can fit in this piece. 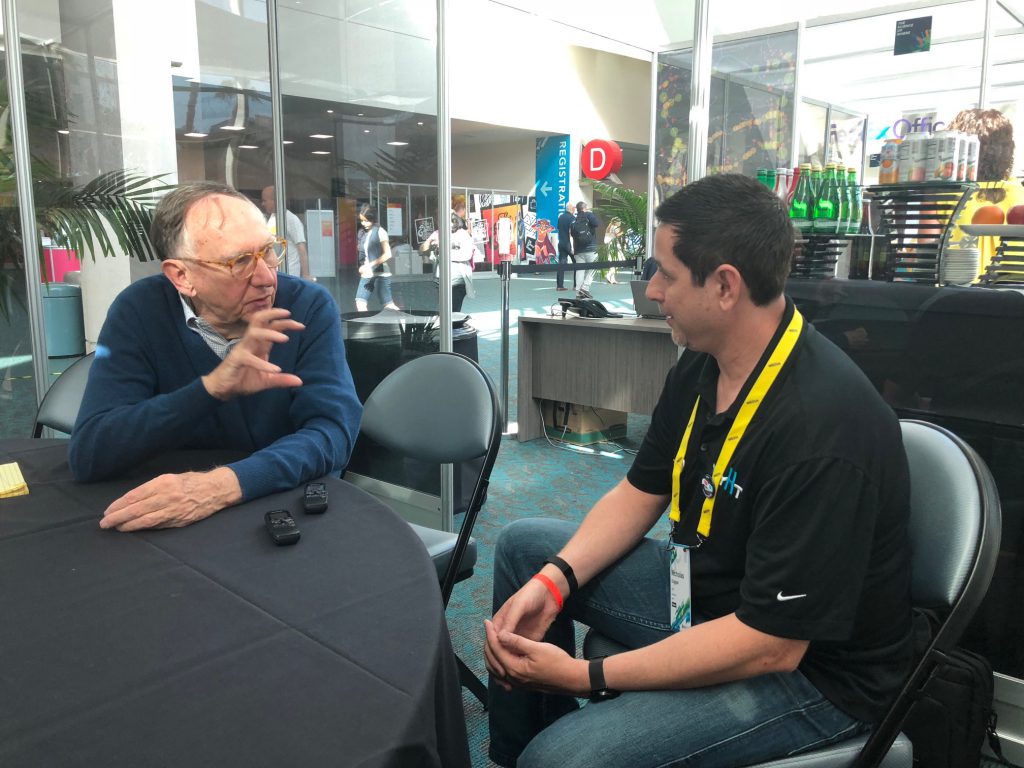 After meeting Jack, I am scheduled to meet Esri staffer Barbara Pickering in the exhibition hall to do the software testing. As I arrive, I notice lots of cubicles, around the size of two-man offices, around the edge of the exhibition hall (not sure how I missed them walking around the first few times!). On meeting Barbara, she goes through the process by which I will be recorded performing some tasks using the new tools and they will ask a few questions at the end on how I felt it went. So I enter the room, am told we are recording, and read the task sheet in front of me and proceed to right-click on a process to enable the batch tools.

The first thing to pop up is a screen asking if I want to save the process or have it temporary. It throws me: why would I want to save it if it doesn’t work? Luckily the rest of the task, which involved batch processing some data, was all plain sailing, and I tell Barbara at the end it all went brilliantly, all except for the initial screen. Barbara tells me that almost everyone else had the same issue and that this is what the testing is all about, ensuring the tools don’t work best for the developers or the designers but best for the users.

It’s really refreshing to hear that Esri takes this time to get real users in to test the software to ensure it works as the users expect. I’ve never been asked by Microsoft, Google, or any other software company as to how I thought their software worked, so it really made me feel like part of the family and that even though they are big, they still care. 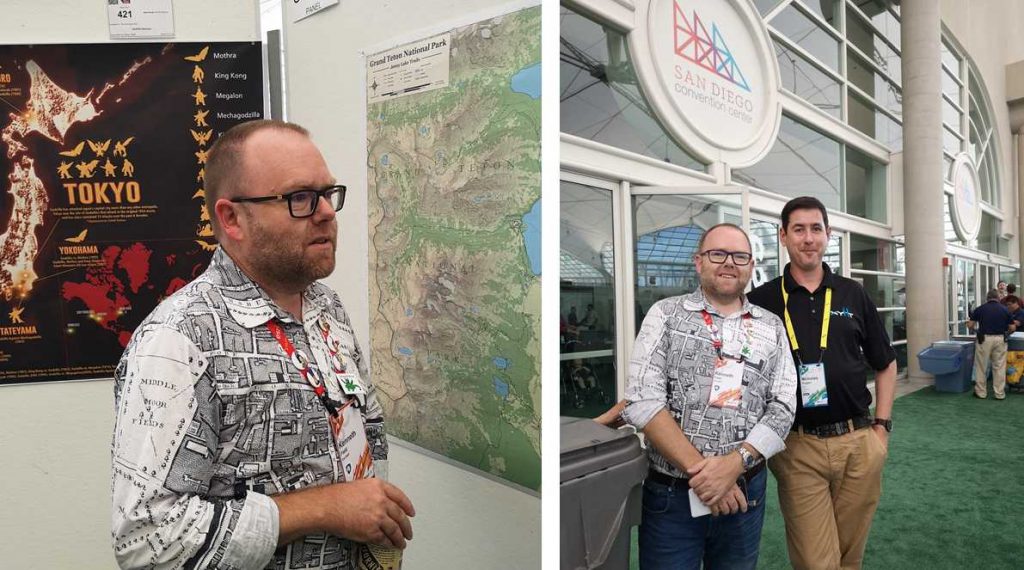 Amazing who you bump into. I met legendary cartographer Kenneth Field in the Map Gallery.

Thursday provides a day of freedom. Much like Wednesday there is the opportunity to get involved in the hundreds of talks, presentations, and workshops, visit the exhibition or Map Gallery, visit the Esri Map Shop (you can fill your suitcase full of Esri-branded gear). or even go and get hands on with their software and question them on some of their weirder stuff (CityEngine?!). Towards the middle of the day there is a slow decline in numbers as people pop back to their hotels to get changed or get ready in preparation for the famous “Esri Party” which starts at 5:30pm. It is an event not to miss with Esri staff and customers partying together with live music and fun to be had all the way to the end of the day.

Friday is the closing plenary. Again, Jack Dangermond gives a couple of hours of scintillating speeches which also includes a presentation of awards for maps which were presented in the Map Gallery. For me this is an exciting event as it appears that I won an award for “Most Unique” map! [Ed. – xyHt will feature Nicks’ award winning map in an upcoming print issue]. 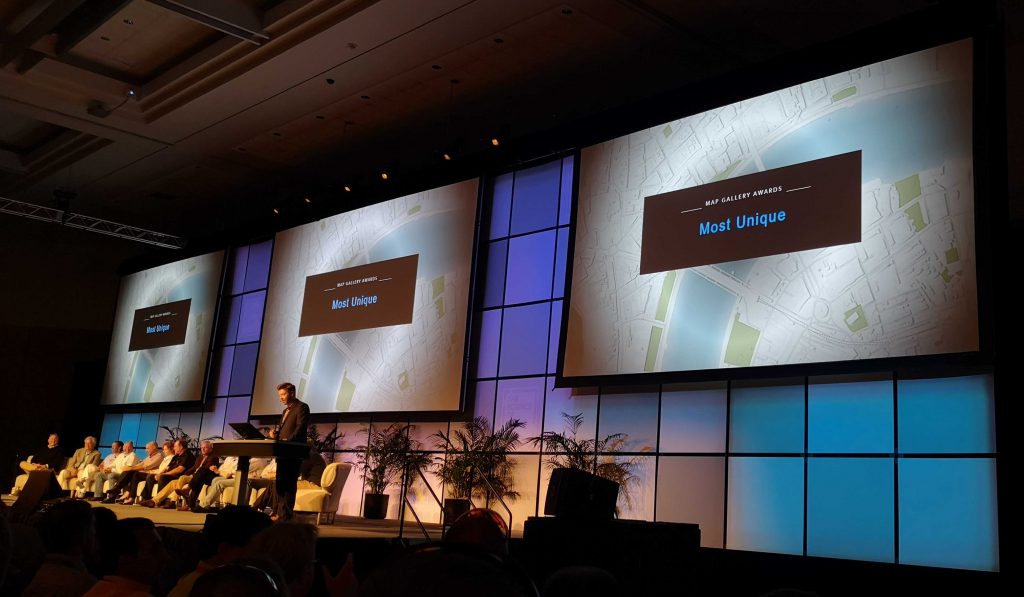 With mere minutes until I am due to catch my plane back to the UK, I dash out of the plenary with my award in hand, and for me the Esri annual conference is over. You can bet I will be back again next year! 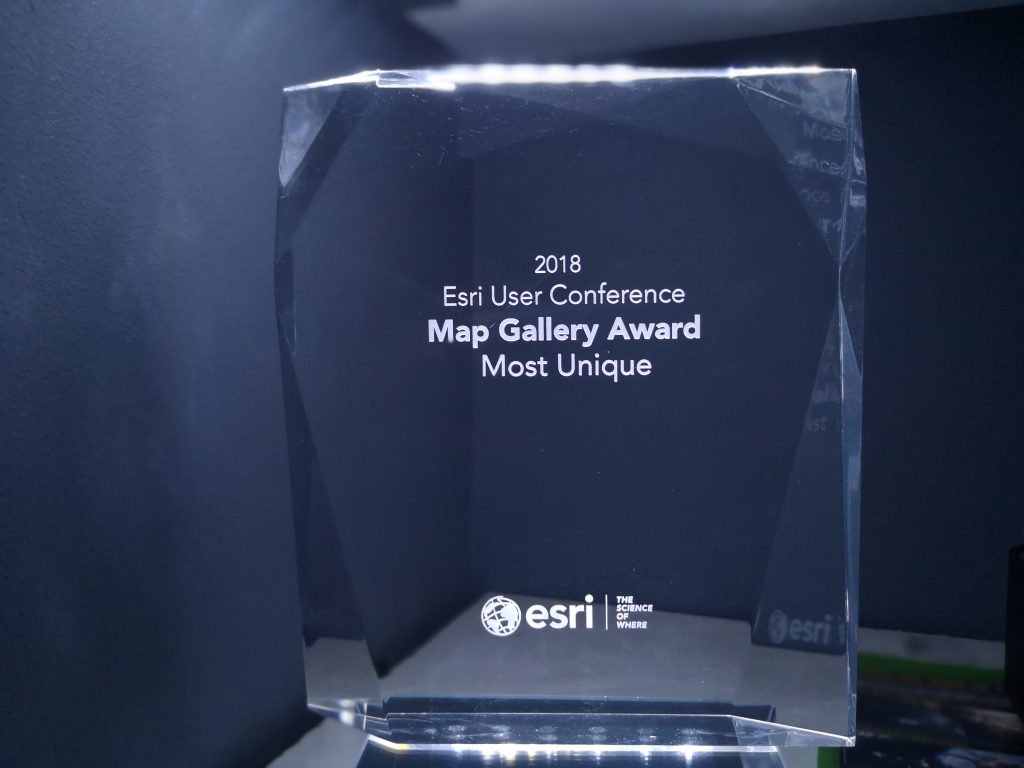