Recently I’ve been doing a bit of GIS training with environmental companies, mostly to help them make the move to open source software. You see, a few companies out there have propriety software licenses that are due to end, but the companies can’t justify the renewal when all they do is draw boundaries on a map and print it out for a client.

One common need among these companies is to be able to record locations and information out in the field on mobile devices for ecological surveys. Ideally, they would have the ability to put national conservation designations and known risk areas on the map so that they could see them as they are out recording information. The kind of information they want to capture is location, textual, and maybe photos.

I was inspired to write this article because of my dealings with QField. I first heard about QField in 2015 when an experimental version was discussed in a blog by OpenGIS.ch, where they mentioned an Android application that let you copy your QGIS projects over to your mobile and use them for recording information out in the field.

Since 2015, QField has had a lot of community input and development. In October 2019, version 1.2 was announced with quite a few enhancements.

Then, as I started to do testing and experimenting, a friend who does open source development asked if I’d seen something called “Input” created by Lutra Consulting. This was announced in March, 2019 and works in a similar way to QField, with the exception that projects can be shared among groups using a cloud-based system, which I’ll discuss later.

QField is available as a free android app on the Google Play store or as a prebuilt APK file if you don’t want to use the store.

It is based on QGIS; in fact, it uses QGIS libraries but is slimmed down to be compatible with mobile devices. After all, all those GIS toolbars and panels would be horrible to use while you’re out and about; therefore the interface has been kept as simple as possible.

Although it has QGIS under its skin, any projects you create in QGIS will run in QField. Whereas QGIS has a focus on editing and data analysis, QField has a focus on the mode of what you want to do. This is kept simple, and the primary options are “browse,” allowing you to navigate around the map(s) and look at the attribution information behind the data. The other option is “digitize” which, as it sounds, allows the drawing and table information filling.

Now, this is the interesting bit—due to QField being built on the QGIS libraries, you can alter the way things function in QField by adjusting your QGIS project. For example, if you set up a layout template (Print template), you can then print to PDF within your QFIeld application. Furthermore, you can create themes and allow visibility to certain layers and add different basemaps or even reduce the visible extents of the data, all by adjusting the settings of your project in QGIS.

When setting up data for recording information out in the field, it is very simple to build things in QGIS. Unlike other GIS, QGIS has an option called, “attribute forms” in the data properties. This allows you to adjust the way that the attribute information is displayed. You can set options for fields to be check boxes, photos, urls, date, time, and more, this, in QGIS terminology is called “field widgets.”

The only slight downfall to QFIeld is that you have to load your QGIS project to your mobile device, so storage space is a key requirement. Although this isn’t a deal-breaker, it requires you to be a bit more careful with the size of data you are using and also the extent (if working in a single city, you would need to clip all the data down to that area).

Obviously, this isn’t as slick as its proprietary counterparts that use the cloud for data management, but, with loading and managing your data between desktop and device like you do in QField, you do feel like you have a touch more control as you manipulate the data on the local level.

By loading projects directly to the device, multiple edits and team working becomes more of a consideration, though this is managed, in part, by the fact that each team member will need to load the project. Therefore the project could be split into the areas for which each of those team members are working. Again, this is not a deal-breaker but another consideration that may be taken for granted in other apps.

Screenshot from Input showing the primary interface with a record on the Thames.

Information returned from the recorded point.

Again, Input is an application freely available from the Google Play Store, but unlike QField, it is also available on the Apple store. In fact it is the first QGIS app available on the Apple store! Although the application is stated as free and open source (and it is), there are tiers to usage related to the size of projects and data you are using. At present, projects up to 100mb are free, and then projects larger will be paid by subscription. Although no price has yet been set, I have been reliably told that a price of around 10EUR a month for 1GB is being discussed: quite reasonable when you think about the cost of storage nowadays.

One of the big selling points for me and the reason Input caught my eye was that it advertised itself as having support for external GPS receivers and also GPS accuracy settings. Although I am sure that QField would be fine with using an external GPS receiver, my exploration didn’t find any GPS accuracy settings or functionality. Input has a clear interface on the settings for information like the accuracy threshold and the GPS accuracy which is shown as a simple traffic light system. A nice touch is the halo around the symbol showing your current location, which shows the current area of potential accuracy.

Screenshot from the settings page.

Input has a QGIS plugin to enable the upload and download of QGIS projects and data with the Mergin cloud application. Functionality exists to make projects public or keep things secure and private by setting passwords. This is something I asked Lutra Consulting about in detail, as one problem I’ve had with these types of applications is where multiple users are editing the same area and the same information gets captured multiple times with different attribution. It was nice to hear that this had been considered; they told me that conflicts where users update at the same time are consolidated using Geodiff, an open source geospatial comparison tool that they made.

An alternative to the proprietary solutions? 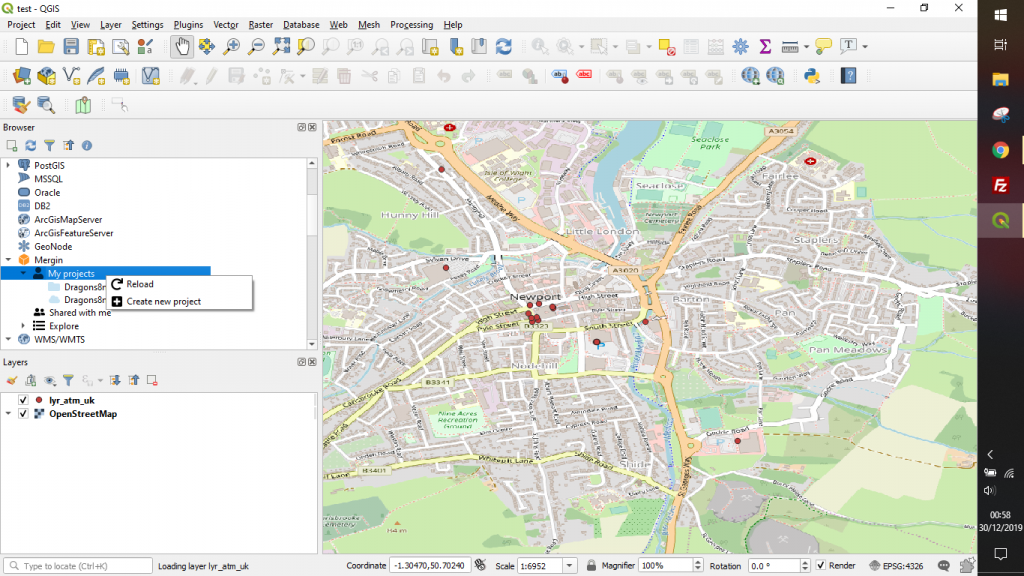 QGIS with the Mergin plugin for uploading and downloading projects.

If you have read this far, chances are that you are looking for an open source alternative to Esri Collector. How can these two applications compare to the slick, integrated workflows and ease of use that Esri offers?

Well, I would say that this comes down to your level of skill and what background infrastructure you are using. If you are already an Esri user, you will already have your data in the cloud and the tools in place to go out and survey easily, and if you aren’t a QGIS user already there is a slight learning curve to where functions sit.

Those of you who aren’t using Esri and are looking to find an easy way to go out and capture data will find these solutions ideal. You don’t really need to be a QGIS user to be able to get up and running with either of these applications, and instructions are provided on the websites for both; it is just a little “open source,”

Now, before we get our knickers in a twist, what I mean by this is that there is a slight expectation in the instructions that the user is already knowledgeable about certain things. For example, the section on “field widgets” is only a paragraph long. Although this is easy to learn, and reading the QGIS documentation will give you the information you need, it isn’t straight forward and polished like the proprietary alternatives. Don’t let this put you off though. My son found it easy to get on with Input and told me it was like building Legos.

Having seen both these applications being used out in the field for ecological data capture, I can say that both are robust and reliable ways of capturing the data. Depending on how you configure your templates and data, they can be just as good, if not better than, their proprietary counterparts.

My personal recommendation would have to go with Input, though, as it not only provides the multiple editing consolidation capability but also works on iOS and Android with the ability to implement projects across multiple users.

Please remember: even though these applications are open source and free, it has taken someone time and effort to build them, so if you like one and use it commercially, maybe give a little tip so they can make it better or add new features.