You have probably already seen 360 videos – all over the place. Likely you have seen these on a YouTube, or tried a virtual reality experience by inserting your smart phone into a simple VR stereo viewer like Google Cardboard. MieMode, or the new Galaxy 7 accessory goggles – and likely this involved 360 videos produced for entertainment purposes. There is a certain irony that four students, enrolled in the prestigious film program at Chapman University in southern California would be on a mission to perfect 360 video implementations for serious, non-entertainment purposes.

The initial focus of startup “Vego 360″is to produce 360 videos for prospective college applicants to be able to take immerse virtual reality campus tours. You can see an example of a college tour 360 video they produced on their website: www.vego360.com or by clicking the image above. If you’ve never tried a 360 video before, note that you can scroll around the 360 view by moving your mouse within the YouTube viewer catching live action all around.

The Vego 360 team does not want to stop there. They are working on applications for real estate, businesses, restaurants, hotels, and more. But one of the more intriguing applications they see as a major market is for surveying, mapping, engineering and construction. xyHt was quite flattered to hear that they had been in part inspired to look into such additional markets after seeing our coverage of 3D and VR in recent issues. The team foresees being abler to provide this virtual reality experience with elements of 3D point clouds, models, and designs integrated. Imagine a site walk-through, inspection, or evaluation of design alternatives presented in a fully immersive manner that remote partners, stakeholders, surveyors and engineers have never been able to experience before. 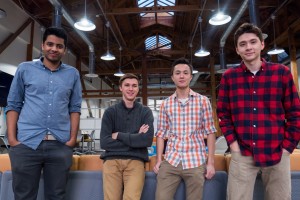 The team is a good compliment: the entrepreneur, the designer, the producer, and the VR expert. In true startup manner, the team even designs and builds their own custom multi-camera 360 video jigs, which they produce on a 3D printer. This allows them to produce custom jigs for different applications. They have also placed one of their camera arrays on a post mounted on a small robotic vehicle to provide unobstructed 360 views for walk-though style applications.

Will you see 360 video in your projects in there near future? Possibly, and if you do these four young developers will have been hard at work making it possible.