Above: nmcn’s final CAD model as generated from PX-80 data. The 3D model is situated in the topographical point cloud data.

Are these new tools accurate enough?

Are the benefits worth it? Many users outside the traditional survey world are answering this question the only way that makes sense, by comparing the tools in real-world applications. One such customer, leading UK general contractor nmcn, field-tested Paracosm’s PX-80 handheld lidar against traditional tripod-based lidar on a 3D building documentation project. Here’s how they did it and what they found.

In early 2019, the company undertook a job to convert a 57-meter complex of derelict farm buildings into apartments. They used this project as an opportunity to compare the performance of the two scanning technologies for capturing existing conditions.

Since nmcn—like most construction companies—does not see the raw point cloud itself as a final deliverable, they decided not to use the unprocessed data produced by the two scanners to quantify accuracy. Instead, they converted each set of scan data to a CAD model, and then compared those deliverables against one another. 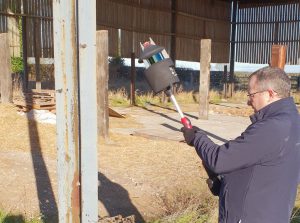 nmcn scanning the farm site with the PX-80 scanner

To start, a single nmcn employee scanned the entirety of the site with the handheld lidar. Next, a team stitched the scans together using CloudCompare, brought the final point cloud into Autodesk’s ReCap to convert to an RCP file, and then brought that file into Revit, where they created 3D models for the site. While the raw point cloud data was in CloudCompare, nmcn also processed the data to isolate topography, and then brought those points into Revit to lay them over the 3D models and offer environmental context.

At the end, nmcn tallied the cost of each approach, and then laid the two models on top of each other to judge the performance of the handheld lidar. 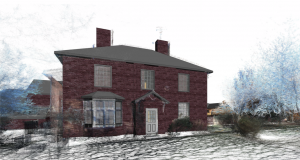 Detail of nmcn’s final CAD model for the site.

The first finding was no surprise: The SLAM-based handheld lidar was significantly faster. One person using PX-80 needed only four hours to capture the entirety of the site, where the team of four specialists with laser scanners and distos took 32 hours. After calculating the cost of these field hours, nmcn determined that handheld lidar was eight times less expensive overall.

The second finding was less expected: When the team overlaid the 3D data sets for the whole site, they found that the two models differed by only 39.2 mm, or about an inch and a half. Across the entirety of the 57-meter site, that comes to +/- 0.06%. Comparing angular accuracy across the same site, the team calculated less than 0.01 degrees deflection.

In certain real-world use cases that difference in the final deliverable would be significant. However, since the company was generating 3D models for a refurbishment project, nmcn found the difference to be negligible.

The complications of modeling over a point cloud

Furthermore, nmcn head of digital transformation Gary Ross has reasoned that the difference in the two final deliverables could easily be attributed to the intricacies and complexities of 3D modeling over a point cloud.

Since a lidar scanner measures using spaced laser pulses, he says, that makes it unlikely that the pulses are hitting hitting the edge of an object, and more likely that the pulses are hitting to either side of the edge. The upshot? When you look at the object as it is represented in the point cloud, the edges will be less accurate than the laser scanner’s spec sheet might lead you to believe. 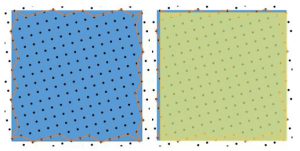 An exaggerated image to demonstrate. On the left: The blue is the object as it exists in reality, the black dots are the points measured by the scanner, and the orange line is the edge of the object as represented in the scan. On the right: The yellow overlay shows how a human would likely model the object—a close guess at best.

That’s even before you get to the process of modeling. Since “the operator can only work with what they have,” Ross explains, each modeled object is more of a “best guess to the size and position of the object, based on the scan data.”

These inaccuracies of modeling over a point cloud become even more pronounced when you extend the human factor over the range of the whole model. That’s why Ross determined that the modeling process itself “could have caused a 39.2 mm difference on either drawing, and as such the scanner technology was neither here nor there.”

The benefits of SLAM scanning come with one well-known tradeoff—they generate data with lower specified global accuracy values than most tripod-based lidar scanners. However, the degree to which that tradeoff matters can vary depending real-world factors such as the intended use case of the data, and the processes that are used to prepare the final deliverable.

In nmcn’s case, the company was scanning to generate 3D construction models for refurbishment, brownfield, and greenfield projects, and they used human modelers to generate that deliverable. This meant that the PX-80 handheld lidar produced data that was more than adequate for their needs. They were able to use the tool to capture data at a lower price and with greater speed than tripod-based scanning.

nmcn recognizes that a handheld lidar scanner is not the right tool for every use case—but they argue that users should match the tool to the job. Technology, they concluded at the end of their comparison, is most effective when it suits the problem at hand, and the final deliverable you are looking to create.