The Earth may be round but it’s best visualized as an ellipsoid subject to a multitude of external and internal forces which cause its very shape to change over time; there is no mathematical shape or function that can accurately map the surface of the Earth. More and more survey networks are being based on three-dimensional (3D) measurements, demonstrating a growing need for 3D survey networks. Modern cities require robust control networks, resource industries are venturing further and in need of expansive coordinate systems, and the geodetic professionals who support these industries need the tools to deliver more rigorous least squares adjustments. Differential leveling measurements are 1D of course, but the other two main groups of measurements, namely GNSS/GPS and total station measurements, provide 3D information for our networks.

Historically, surveying networks in the large part used to be either 2D (horizontal) or 1D (vertical). The rationale was that the older measurements themselves were generally either 2D (triangulation, traversing, baselines, and trilateration), or 1D (differential or trigonometric leveling). The least squares adjustment software used on these networks was either 2D (adjustment on the reference ellipsoid) or 1D (adjustment of leveling measurements).

We could simply continue to adjust the horizontal (2D) and vertical (1D) measurements separately, but this approach will not produce the best results. Using 3D mathematical models for 3D measurements produces better results and takes less time and effort. The old ways of least squares adjustments and how “it has always been done” are no longer as useful.

In comparison, I used an up-to-date least squares adjustment software tool, GeoLab 2020, that does all of its adjustments using 3D network models. In this three-dimensional software tool, I combined the GPS and total station measurements in the overall adjustment; this caused the estimated variance factor to increase by about 5, caused by the usual small systematic errors in both groups of measurements. Three GPS vectors were now flagged for rejection in this case. 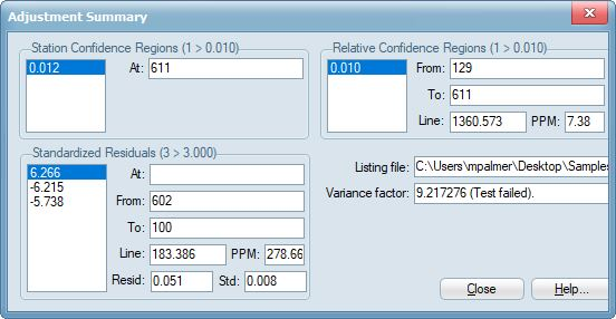 The important message in this side-by-side case comparison is that in order to calculate the most accurate and realistic adjusted values for a survey network, alongside their covariance matrix, it’s best practice to:

Why the Math Models Matter

The underlying math models matter in order to make the rigorous least-squares adjustment accurately and efficiently. The GeoLab least squares adjustment software tool used in the above case comparison uses highly rigorous 3D mathematical models which are explained further here. Math models are crucial in network adjustments in that they form to relate unknown parameters to observations, and the math models in GeoLab are exact and contain no approximations. Adjustments are done in a 3D Earth-centered, Earth-fixed (ECEF) frame, meaning that networks can contain points and observations spanning the whole globe, or even into space, with no detriment to accuracy. 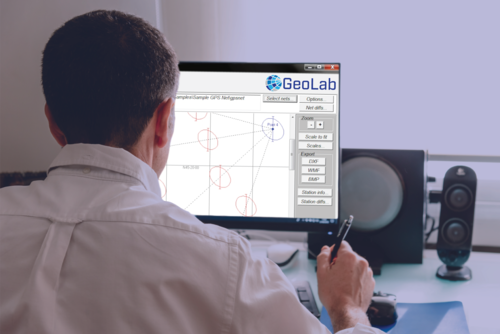 Another example is when GPS measurements are pre-processed, the resulting vector covariance matrices are generally quite optimistic and need to be scaled when the vectors are adjusted together in a network in order to better reflect the reality of the accuracies of these measurements. Requiring measurements to fit together geometrically and statistically within a real network, as well as with other measurement types, gives us the most realistic adjustment results.

When measurement groups are separated in adjustments:

The good news is that certain modern software products, such as GeoLab, can handle your 3D networks rigorously and easily.

As professionals it is our duty to ensure that we adhere to certain standards of care when providing geospatial data of any type, whether it be conducting a local boundary survey or monitoring the spatial configuration of a satellite constellation.

To determine the most accurate and realistic values of unknown parameters in a network along with their statistical relationships and uncertainties, it is not enough to simply trust the measurements we take in the field or adjust these measurements on a reduced 2D plane; for optimal results, it is best for us to combine all available types of measurements together in one rigorous 3D network adjustment process.