In a residential subdivision in Saskatchewan, a 3D site plan appeases frustrated residents as well as a tight construction deadline.

Many homeowners are attracted to the yin and yang lifestyle of having a cozy country home with easy access to the excitement of a vibrant city. A Canadian residential subdivision in Saskatchewan seems to capture that spirit perfectly, but with a construction challenge.

Nestled in rolling prairie and among tranquil ponds, the Grasswood Estates development is located in Corman Park, Saskatchewan, a suburb of Saskatoon, the largest city in the province. The subdivision is in the country literally 10 minutes away from downtown Saskatoon.

The 150-acre residential subdivision was created two years ago on vacant farmland with 42 of the planned 180 homes having been constructed almost immediately. A scenic, winding six-mile road connects the properties and provides ingress and egress to the subdivision. Additional homes are continuing to be built from the initial surge.

Investor Darren Hagen is the owner/developer of the $2.8 million-Canadian Grasswood Estates project. The subdivision is part of the expansion of city of Saskatoon geographically as the metro-population increases. Residents have quiet living with easy access to the diversity and activity of the city. 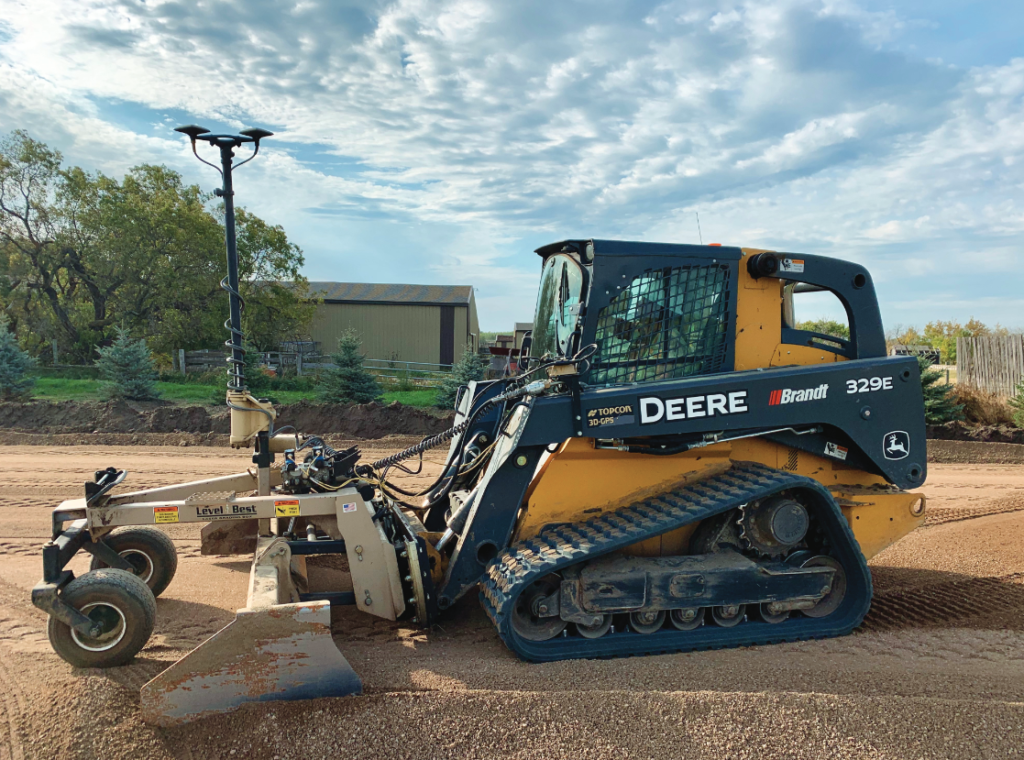 A skid-steer loader was used to accommodate the stop-and-start traffic flow on the six-mile winding road.

Homeowners in a Hurry

For the first two years, the homeowners were driving on temporary and, in some cases, rutted roads that wound through the subdivision.

“Initially, our biggest challenge on the project was winning the confidence and cooperation of the homeowners who had been patiently waiting for their road to be paved,” stated Jean Poirier, project manager with Warman Excavating. “We went out of our way to assure the residents that we’ll do what we can to accommodate their needs while working hard to complete the road quickly.

“For the first two weeks of the project we used layout stakes, which proved to be a cumbersome mistake. With the amount of resident traffic going in and out of the subdivision, we had to spend an inordinate amount of time re-staking all the ones that were run over, pulled up, or relocated because a frustrated resident wanted them out of the way.”

Poirier also learned fairly quickly that there are 38 engineers living in the subdivision, which provided an extra challenge.

“I’m an engineer too, so I know what a pain we can be in terms of wanting to know exactly what’s going on in a project,” said Poirier. “There was one engineer resident who would measure our progress each day using his own instruments. It took him a few days before he accepted that we know what we’re doing. I wasn’t angry or insulted since that engineer and I are alike in needing to know and having the desire to make certain work is completed accurately.”

To move away from staking, Poirier contacted the local Topcon Positioning Systems dealer Muaz Sheriff, with Brandt Tractor Ltd. Sheriff helped Warman Excavating create a 3D site plan that could be used by the heavy equipment for GPS-guided machine control.

The digital site model was created using Topcon Magnet Office and P3D software. Warman Excavating then had all the points and the site plan governing the progress in the field displayed in the cabs of the GPS-governed machines.

“The MC2 system is designed to reduce downtime, increase productivity, reduce machine maintenance and lower fuel cost, thus making it a good fit for the Grasswood project,” Sheriff said. “It’s intended to be a dozer system, but works well on compact equipment like a skid steer loader.”

“Production flexibility was crucial considering residents were coming and going at any time during a 24-hour day,” Poirier said. “We needed to stop what we were working on with a moment’s notice and then pick up again after the homeowner had passed without missing a beat.”

Sheriff was instrumental in steering them to a compact piece of equipment. A skid-steer loader, as one of the principle pieces of production equipment, made sense to accommodate the stop-and-start traffic flow as well as the road’s configuration that contained elevation changes, tight radiuses, and twists and turns through the picturesque subdivision.

Shortly after the Saskatchewan Grasswood Estates project began, the owner altered the production timeline, making the completion deadline a full month earlier than the original plan.

“This meant our work week became seven days,” stated Poirier. “We had to work harder and smarter because there was no way we would miss the deadline—our reputation has been built on quality results completed on time.”

For the Warman Excavating crew, their hard work—as some might say, insane production schedule—paid off. The work was completed a full week before the deadline—essentially five weeks ahead of the original production goal. With early completion they safely avoided a $1,000-per-day penalty for every day past the deadline.

When asked if the owner is happy with the new paved road that serves the residents in his new subdivision, Poirier said, “He’s very happy. In fact, he likes what we did so much that he’s hired us to do the same thing on his next residential subdivision project! Hopefully, the schedule will not be as intense.” 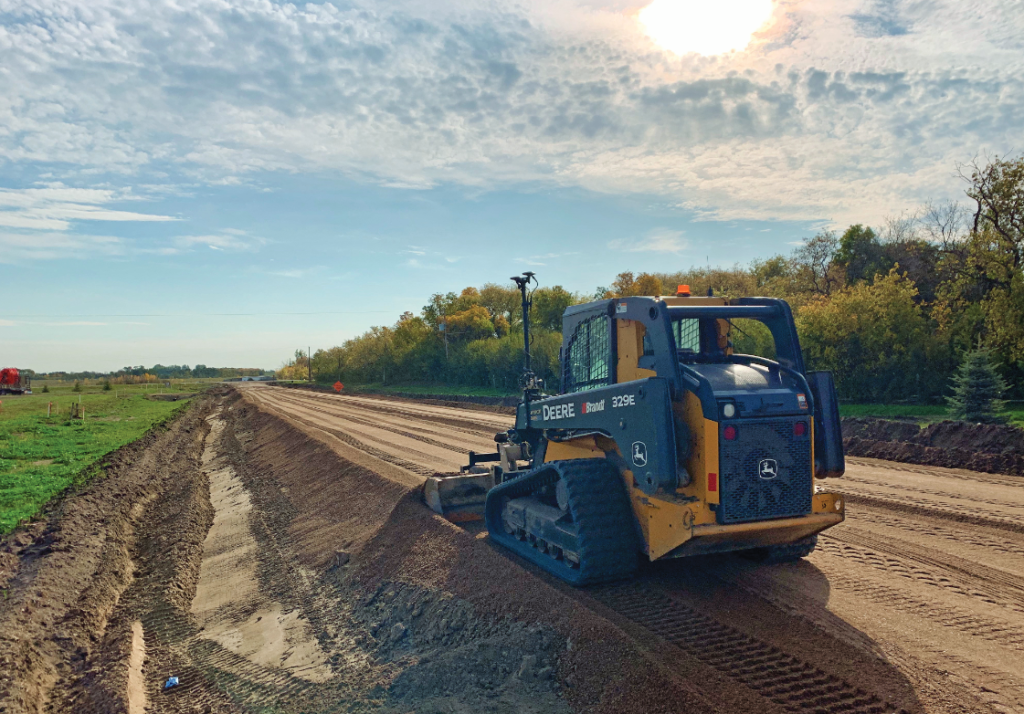 Displayed in the cabs of the GPS-governed machines were all the points and the site plan governing the progress in the field.