June 14, 2014 was a perfect sunny Saturday in Osgood, Indiana, where many people gathered to dedicate the last known complete survey tower and honor Jasper Bilby, the USC&GS reconnaissance man who had designed it. They included surveyors from more than a dozen states, current and retired employees of the United States Coast and Geodetic Survey [(USC&GS, now known as the National Geodetic Survey (NGS), part of the National Oceanic and Atmospheric Administration (NOAA)], and numerous local citizens interested in their town’s history, as well as seven of Jasper’s own descendants, there to pay their respects to their ancestor, and honor his contribution to the nation. 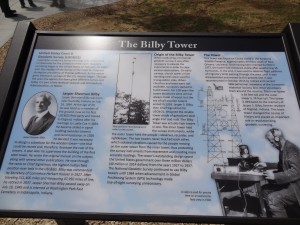 The Bilby Tower plaque was donated to the town of Osgood by the Osgood historical museum.

The Surveyors Historical Society (SHS) had been looking for a complete Bilby Tower that they could preserve, so when they heard of one still standing in St. Charles Parish, Louisiana, they decided to rescue it. With the help of Ralph Gibson, president of the Louisiana Society of Professional Surveyors, members of the SHS, and other volunteers, in 2012 the tower was recovered, dismantled, and brought to Osgood. In 2013, with additional help from volunteers from NGS and support from the Reynolds Foundation of Osgood, it was erected in Osgood Trails Park, over a survey mark that was set in concrete and bears the name “Bilby.” The town of Osgood was chosen because it was where Jasper Bilby lived and raised his family through most of his career with USC&GS.

Jeff French, Ripley county surveyor, and his wife Susan, organized the day’s events, which began with a morning of presentations at the Osgood Grub Company, attended by about 60 people. Dave Doyle, retired chief geodetic surveyor of NGS, began the day with a brief history of the Coast Survey/NGS, explaining the importance of the agency’s mission and the challenges early surveyors like Jasper faced. Bart Crattie, licensed surveyor from Tennessee and member of the SHS board of directors, presented on the history of survey towers, including the story of the recovery and relocation of the tower being dedicated in Osgood. Jerry Price, a former USC&GS employee, continued with a discussion of the nomadic life of the agency’s survey crews during the years of the towers. After presentations, lunch was available before the dedication event at the park. 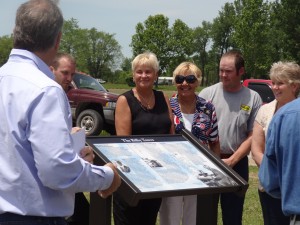 Convening for the official dedication at Osgood Trails Park at 1:30 in the afternoon, Jeff French served as master of ceremonies for the dedication. Following the National Anthem, comments were given by Doug Thayer of the Reynold’s Foundation; Osgood town council member DeDee Holliday; Ralph Gipson, president of the Louisiana Society of Professional Surveyors; Rich Leu, president of SHS; and Dennis Hoar, representing NGS. Following these remarks, the descendants of Jasper Bilby unveiled the historical interpretative marker. At the close of the ceremony, a GPS antenna was mounted on the top of the tower, over station Bilby. GPS observations were collected on the tower and the azimuth mark by NGS employees Dave Rigney (Michigan state advisor), Denny Hoar, and Charlie Geoghegan. In time, the coordinates will be computed from the data collected and made available online. 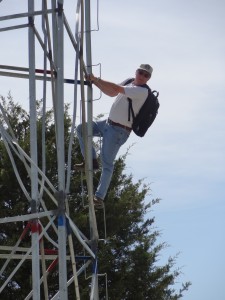 Denny Hoar of the NGS places an antenna on the top to collect GPS data overnight.

The USC&GS, originally called the Survey of the Coast, was established by President Thomas Jefferson in 1807. This first scientific federal agency was tasked with surveying the coast of the new nation so that accurate maps and charts of the coastline could be created to support the national and international commerce needed for the nation to thrive and grow. As the country grew in size, the scope of the mission of the USC&GS grew to include surveys of the interior as well as coastline, and over the past 207 years, the agency has had the responsibility to establish a reference frame and network of survey points to which all manner of federal, state, and local maps are connected, from transportation and navigation to flood plain maps. The technology used, until recently, required line-of-sight observations, which meant slow going in areas where obstructions like trees and hills made it difficult to see from one point to the next. For the first 100 years of the Survey, wooden towers were constructed so instruments and signal lights could be mounted high over survey marks to see and be seen by towers at other distant marks. 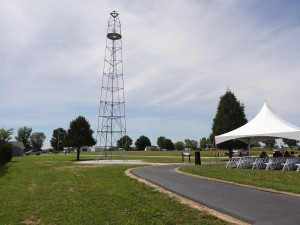 The reconstructed tower on site during the dedication.

Jasper Bilby, born July 16, 1864, was hired by USC&GS at the age of 20 and over time rose to the prestigious position of chief signalman. He saw the need for a better way to get the job done, so in 1926 he developed a plan for a steel tower that could be built, broken down, and reused in different places over and over. The design provided for two unconnected towers: an internal tower on which to mount the instrument and an external tower where the surveyor would stand. The first tower, soon to be called the “Bilby Tower,” was erected in 1927. Using these towers over the next 10 years saved the federal government an amount estimated at over $3 million, the equivalent of $40 million in 2014. Bilby Towers were used by the USC&GS (renamed National Geodetic Survey as part of NOAA) until 1984, when GPS technology replaced terrestrial survey methods within the agency.

Bilby was commended by secretary of commerce Herbert Hoover in 1927. Jasper continued to work for USC&GS until his retirement in 1937. During his service he traveled more than 511,000 miles and measured nearly 48,000 miles of line. Jasper Bilby died at his home on July 18, 1949, and rests in the Washington Park East Cemetery in Indianapolis, Indiana.