Types of Distances for Geodetic Observations

This article explores the various types of distances that are often listed on GNSS adjustment reports; for related articles on the difference between geodetic and observed azimuths and angles, see “Where Theory Meets Practice” in Professional Surveyor’s March and May 2014, issues.

Slope (slant) distances (S) observed on the surface of the Earth are not easily reproducible due to the heights of the instrument and reflector, which are lost once a setup is taken down. This is also true for the horizontal distance at the instrument setup. 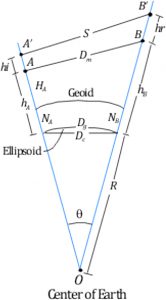 From a practical point of view, these differences are not measurable with the typical distances observed in surveying, and thus this difference is ignored. In any event, GNSS adjustment reports typically list the distance between monuments, which is the mark-to-mark distance shown in Figure 1 as Dm; or a geodetic distance, which is Dg in Figure 1; or a grid distance (not shown), which is related to some map projection system such as state plane coordinates. (This topic is covered in the September, 2013 issue of Professional Surveyor).

The reduction process is performed in several steps using simple geometric and trigonometric relationships. The first reduction takes the observed slope distance and reduces it to a chord length (Dc) at the ellipsoid. The second reduction determines the equivalent geodetic distance for the observation. Because the slope distance is observed at some location above the ground and the reflector is similarly off the ground, we need to add their heights to the overall reduction process. In Figure 1,

The mark-to-mark distance (Dm) and the geodetic distance (Dg) are often reported in GNSS adjustment reports, although not all software manufacturers clearly label these lengths as such.

Because we need the radius of the Earth R and the geoid separation in this reduction, the example will be worked entirely in metric units. However, it can also be performed in English units, but recognize that all length units must be the same.

ON THE SURFACE OF THE

EARTH ARE NOT EASILY

REPRODUCIBLE DUE TO THE

HEIGHTS OF THE INSTRUMENT

Using the relationship of a chord length on a curve, the geodetic distance Dg is as shown in Equation [2]. Note this last reduction assumes that the Earth is a sphere, which we know it is not. However, for the short lengths that are observed typically in practice, this assumption is valid.

However, we can see that the geodetic distance is 0.1614 m or 0.53 ft different from the observed value. This is considerably different from the measured value. GNSS software will report the geodetic length of 499.839 m and/or the mark-to-mark distance between the monuments of 500.000 m. However, it will not provide the horizontal distance as measured by the instrument at the height of the instrument.

Formal education provides the surveyor with the background necessary to become a competent professional. It is time that all surveyors take a serious look at the direction of the profession technologically and the need for a baccalaureate degree to become a future professional.