Of course, the future is impossible to completely predict, but certain factors that drive markets and services are inevitable and therefore should not be overlooked. Chief among these drivers is the immutable fact that people age, and they continue to age. We know when people were born, how many were born in any given year, when they will enter key periods in their lives, and when they will seek certain types of goods and services.

In the space of the past seven decades, the U.S. and many parts of the world have experienced three tremendous swings in births, with demographic repercussions reflected in the professions and industries of construction, engineering, surveying, mapping, utilities, and infrastructure. While other factors have influenced these markets, such as social and geopolitical trends, characterizations of their impact can be subjective. Let’s avoid those cans of worms (please!) and examine the population angle alone.

Sometimes the simplest and most obvious data is the most telling. Imagine a surveyor called into a dispute between two property owners. Both are completely sure of their positions, but it takes the surveyor to research and measure. This involves hard data, which is the best place to start.

The Baby Boom (generally characterized as the period between 1945 to 1960) saw a near-unprecedented rise in live births (Figure 1). That, with immigration, contributed to almost doubling the population of the U.S. from the mid-20th century to today (Figure 2).

What followed, from roughly 1960 to 1981, has been dubbed Generation X, with a drop in total births: about 10 million fewer than the Baby Boom. People born between 1981 to 1999 are sometimes labeled as Generation Y or Millennials, and this group is already set to outpace the Baby Boom in the workforce (Figure 3). Indicators are that the group born since, sometimes called Generation Z, may sustain the upward trend.

Birthrate peaks and valleys echo throughout the respective lifespans of these groups. As time progresses, people reach certain age ranges that represent periods of their lives when they will, with some predictability, be in the position to seek specific types of goods and services. There are peak-earning years, nesting and family-starting years, then home-purchasing, empty-nest, downsizing, and retirement-housing years.

When age cohorts reach certain points in their lives— especially if many people enter or exit these periods in great numbers—there can be significant impacts on planning and development and strains on utility and transportation infrastructure. When cohort numbers drop, shortfalls in disposable income, revenue, and investment can devastate markets and the ability to sustain infrastructure.

The coming boom may not be as pronounced for our professions and supporting industries as was the Baby Boom because of special events from the last half of the 20th century. The undercurrent of the boom was the near-doubling of the population, which drove an expansion of infrastructure the likes of which the world had never seen. For example, the U.S. interstate highway system is widely viewed as humankind’s single largest public work. Together with the infrastructure created to support the Cold War and related space race, bases, and supporting industries, these massive expansions drove an unprecedented need for surveyors, civil engineers, mappers, and geodesists.

Events like the space race and its associated tech boom also, ironically, contributed to contractions in our professions. The launch of Sputnik in 1957, as GPS pioneer Charlie Trimble noted in our November 2016 interview, “turned the education system in this country upside down.” By the time Laika orbited the Earth only a month later, the U.S. and much of the world was furiously planning to upgrade science education, higher academia, scientific research, and other space/defense-related industries.

The era eventually produced GPS, satellite-based imaging, lidar, InSAR, scanning, and more. Our modern surveying instrumentation leapt from legacy analog roots to dizzying heights of digital wizardry in a few short decades. This wave of automation presents serious challenges to the profession, which I will touch on below.

The “big one” was the post-war suburban-sprawl boom, epitomized by the planned community of Levittown, New York, and numerous “Levittowns” spreading across the country. This boom was consistently sustained from the late 1940s until the early ‘80s, with a smaller echo in the early 2000s. As a result, many of today’s surveyors (myself included) entered the field to fill the needs of the simultaneous housing, defense, and infrastructure booms. Since then, the surveying profession has become noticeably older and has not fed the pipeline with new practitioners.

The 10-million drop in the number of live births during the Gen X trough might look like a relatively small drop compared to a total population around the 300 million mark. But a drop of 10 million spread across key age cohorts could (and arguably did) have the most direct impact on housing and development, markets for geo-services, related education programs, and sustaining infrastructure.

An interesting take on such impacts (and a good read) is The Age Curve, by Kenneth W. Gronbach. Gronbach examines the effects of the Gen X trough on markets for specific goods and services, ranging from import motorcycles to soda-pop, from jeans to housing. Most forward-thinking industries have recognized the power of demographics in future-casting; indeed, Gronbach was an invited speaker at Autodesk University 2015. 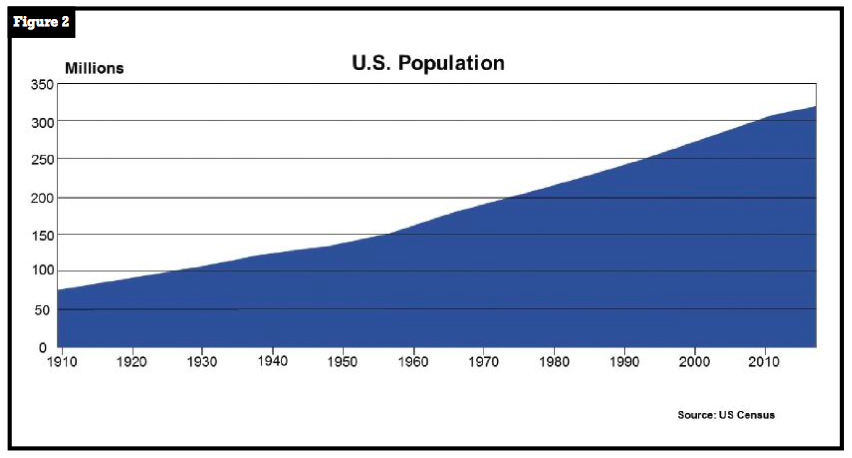 Throughout history it seems that each succeeding generation feels that those who follow are not to be taken seriously (The “Four Yorkshiremen” Monty Python skit is a funny example). One thing is certain about this upcoming dynamic, though: the sheer numbers in key age cohorts of Millennials need to be taken seriously. We must watch when Millennials need key goods and services and how we can provide them—or Millennials will find other ways to get them. If our professions and related industries are not prepared, Millennials will find ways to do it themselves, make it themselves, or seek what they need from firms in countries that have had the foresight to gear up for the coming wave.

Special characteristics of this millennial wave could temper the impacts in some areas yet accentuate them in others. This wave is diverse in education, worldview, life experiences, symbiosis with technology, mobility, urbanization trends, desires for green solutions, and more. (Whether previous generations view these characteristics as positive or negative is moot as the Millennials will chart their own path.) This wave can be good for business and good for succession planning for surveying and other professions as long as we recognize and consider those characteristics. 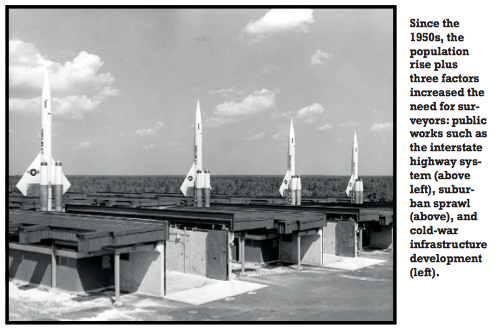 I hope that the use of the following word—diversity—is not read negatively. If the outreach efforts of our professions and industries do not make an effort to find a better fit with key characteristics of the millennial wave—all of it—we may find it much more difficult to meet the needs of this wave, to attract young people to the professions, and to stave off their seeking goods and services elsewhere.

The automation wave has contributed to a reduction in the need for people doing certain tasks: a downside to increased productivity in many cases. The manufacturing sector has most definitely wrestled with this, and to its credit, serious economic studies it commissioned have informed substantive and effective initiatives to provide steady supplies of the more-skilled workforce needed. 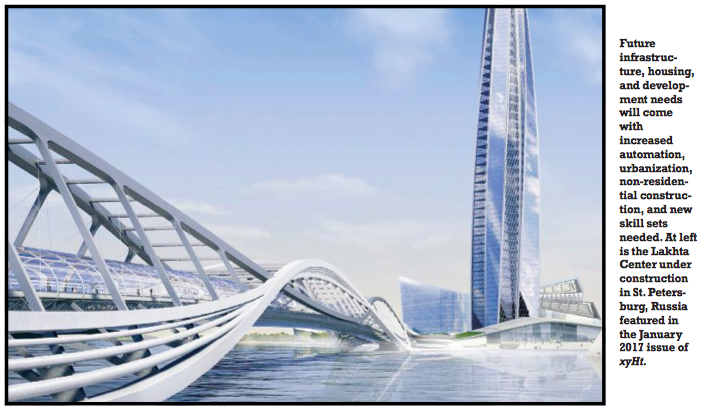 The current uptick in construction has been tempered by automation advances and construction globalization, with increasing opportunities for surveyors and engineers. The rub is that employers are often seeking new skill sets. Unfortunately, current education and training resources, having shrunk during the trough, are scrambling to fill the demand for these new skills.

While walking around trade conferences, I’m amazed by the numbers of employers, large and small, who say they are desperately seeking good candidates who can hit the ground running. This is not just about technology as much as it is about experience in non-legacy types of work.. Urbanization trends result in less of the suburban-sprawl type work (e.g. plat staking and boundary) but more of the multi-unit and re-development type of construction projects—presently a mini-boom (Figure 4). The way such projects are approached requires different skillsets.

Consider BIM, for example. Sites with existing structures are now scanned, designed in 3D, and constructed using BIM. The new generation of clients grew up in a 3D world and (whether we like it or not) expect scans, UAS, 3D models, immersive representations, and more to be employed. A 2D drawing, in some ways, is as anachronistic to them as daily transportation via horse and buggy was to us.

Efficiency and automation have resulted in smaller crews and pose a serious challenge to us being able to provide direct mentorship and on-the-job training. This is where our professions and industries will need to get creative. Other parts of the world have successfully met these challenges with formal (and incentivized) apprenticeships and vocation programs. We can learn from these. 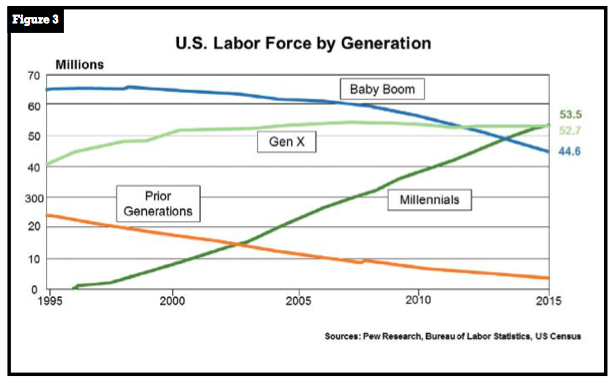 This is a new, different kind of demographic wave. It’s perhaps smaller than the previous big wave, but we’ll need to learn to surf it, and not with the legacy “long boards” we learned to ride decades ago. Here’s what we might need:

New leadership. It should not be considered “ageist” for us to seek more representation from the new wave in high leadership positions in professional associations and societies. Having at least some new leaders from the new wave is critical: those who can understand—and especially relate to—this and the upcoming generations. An example of progress in this direction has been the rapid growth of the Young Surveyors (YSN) groups, both internationally by the International Federation of Surveyors (FIG) and in the U.S. by the National Society of Professional Surveyors (NSPS).

Brand and messaging. Although our message might be less about “re-branding” and more “re-minding” the new wave who we are and what crucial services we provide, we may need to make more of an effort to remind in a manner that they can relate to. I am not talking about trying to explain geodesy through a rap song, but we could start with not condescending to this new demographic.

Serious research. Here I’ve provided only a cursory look at demographics and market trends. Our professions and industries could follow the lead of other sectors that have commissioned serious economic studies, such as manufacturing, automotive, high tech, and more; often federal funds are available for workforce and market research. Related entities such as the NSPS have ongoing workforce-planning initiatives, and the Forum of the Future of Surveying is hard at work. Their success will depend on our willingness to participate and support them, but more critical is the willingness to step out of our comfort zones and acknowledge that there is something significant brewing on the horizon.

Looking at the graphs, we might conclude that the coming wave is a mere blip on the horizon or that other factors might make the wave moot. But can we afford to entirely ignore the signs? Especially with Gen Z following the Millennials, most likely sustaining the growth trend-lines? Are we ready, and are we willing to get ready?