A new chapter in urban development is being written in Russia’s north-west corner. On the outskirts of Saint Petersburg, construction is underway on the new Lakhta Center, an ultra-modern facility that blends commerce, recreation, and cultural activities. In addition to incorporating hundreds of innovations for efficiency, comfort, and technology into the project design, Lakhta Center is leveraging advanced GNSS solutions to provide precise, efficient construction. The results will be stunning. 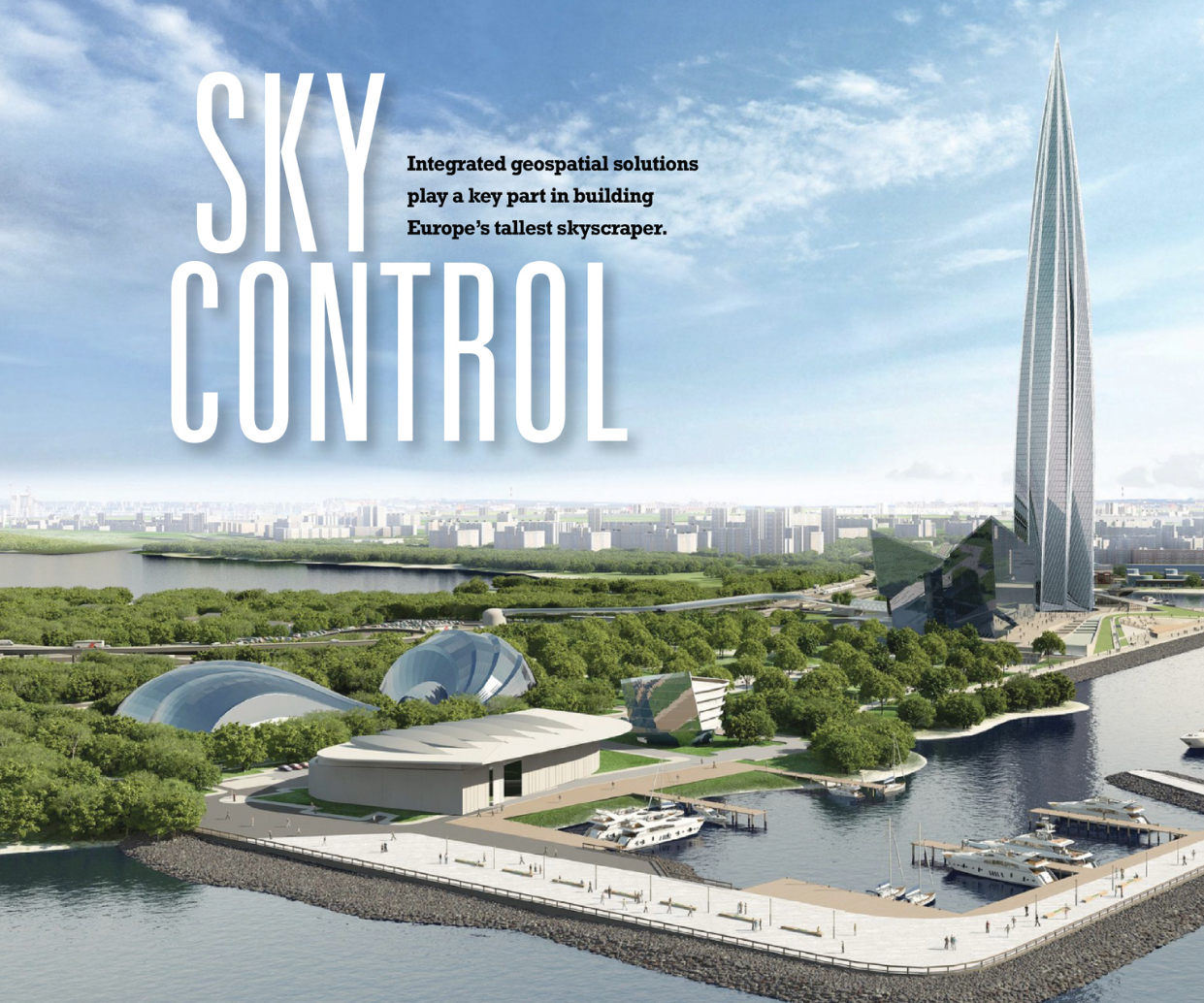 Saint Petersburg is Russia’s cultural capital, second-largest city, and key port on the Baltic Sea. With rich heritage extending from the 15th century, Saint Petersburg today blends historic buildings and classical architecture with the energy of a modern commercial and transportation hub.

Saint Petersburg’s need for new development to support economic growth is challenged by the city’s desire to preserve the heritage and physical beauty of its historic central districts. Like many cities, Saint Petersburg faces issues with congestion and traffic as well as differences in quality and availability of services and amenities between the central urban areas and outlying districts. When a new development was proposed to provide needed commercial and public space, planners sought to balance commercial needs with the city’s physical and socioeconomic constraints.

After extensive study, the development team selected a site in the Primorsky district, roughly six miles northwest of downtown, that could provide room for innovative design and construction. Under a polycentric strategy, planners envision new self-sustaining public and business districts outside the city center.

With roughly 99 acres of space anchored by a massive tower, the Lakhta Center project comprises a mixed-use public and commercial complex featuring office space, a Multifunc- tional Transform Hall, scientific and educational facilities (including a planetarium), as well as large outdoor spaces for concerts and recreation. The center will include a major heath center with diagnostic and treatment facilities to serve Primorsky residents. 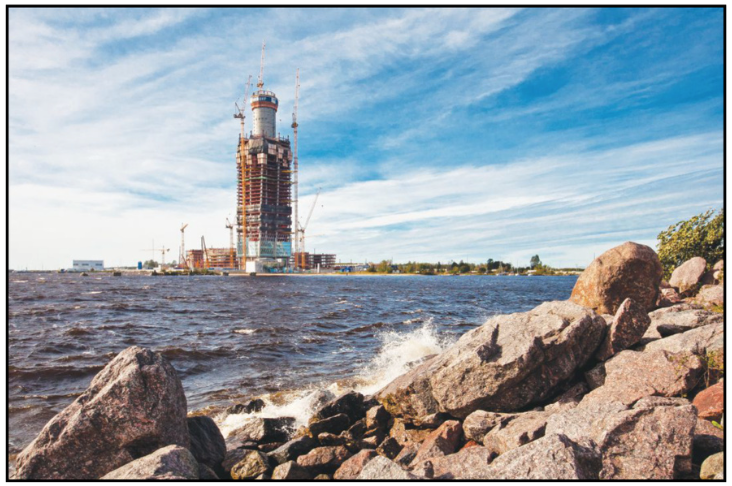 The centerpiece of the project is the Lakhta Center tower, which will stand 1,550 feet tall and house the headquarters for Gazprom, Russia’s largest natural gas production and distribution company. When completed, the tower will be the highest building in Europe and rank among the ten tallest structures on the planet. An observation deck 1,181 feet above the ground will provide 360-degree views of Saint Petersburg and the Gulf of Finland. High-speed elevators will carry visitors to the building’s highest levels at speeds of 26 feet per second. 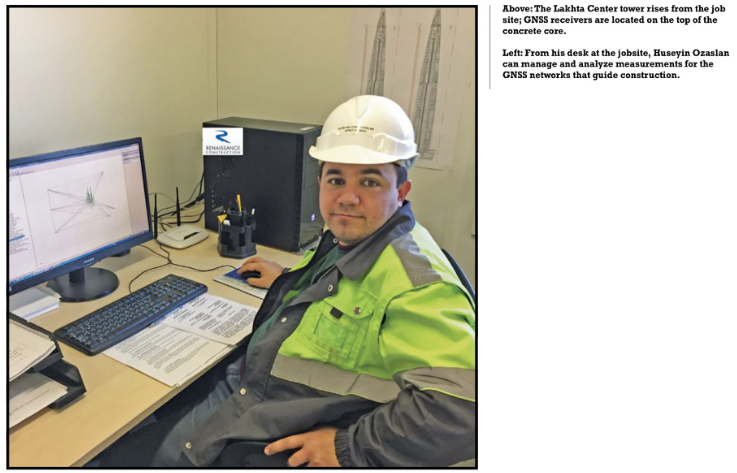 Construction of the Lakhta Center began in 2012. The project contractor, Renaissance Construction, specializes in construction of commercial projects, industrial facilities, and high-rise structures.The company’s recent projects include the 1,480 ft-tall Federation Tower in Moscow, which—until Lakhta Center opens—holds the title of Europe’s tallest building. Renaissance’s experience with tall buildings is a key asset in constructing the tower. According to Renaissance surveying engineer Huseyin Ozaslan, surveyors and construction engineers must provide accurate positioning data to support crews throughout the con- struction process.

As the structure rises, surveying engineers maintain precise networks of control points that move up with the building. The control points provide the reference frame for place- ment of concrete and structural components. Precision and accuracy are crucial; even a small positioning error might introduce problems as the construction moves higher.

One classical technique, optical plumbing, uses precise instruments to establish vertical lines up through the structure. But the approach requires holes in floors and can disrupt construction activities.

Additional challenges arise due to movement of the structure itself. Settlement or subsidence of the ground beneath the building can produce tilting. Wind and solar-induced ther- mal expansion can twist or warp the structure during the day. As a result, precise control requires frequent measurement. Lakhta Center project surveyors needed to find a solution that would provide precise positioning at all times for surveyors working atop the structure—and to do so without disrupting the busy site.

  The system is configured to operate three RTK engines simultaneously within the T4D software. 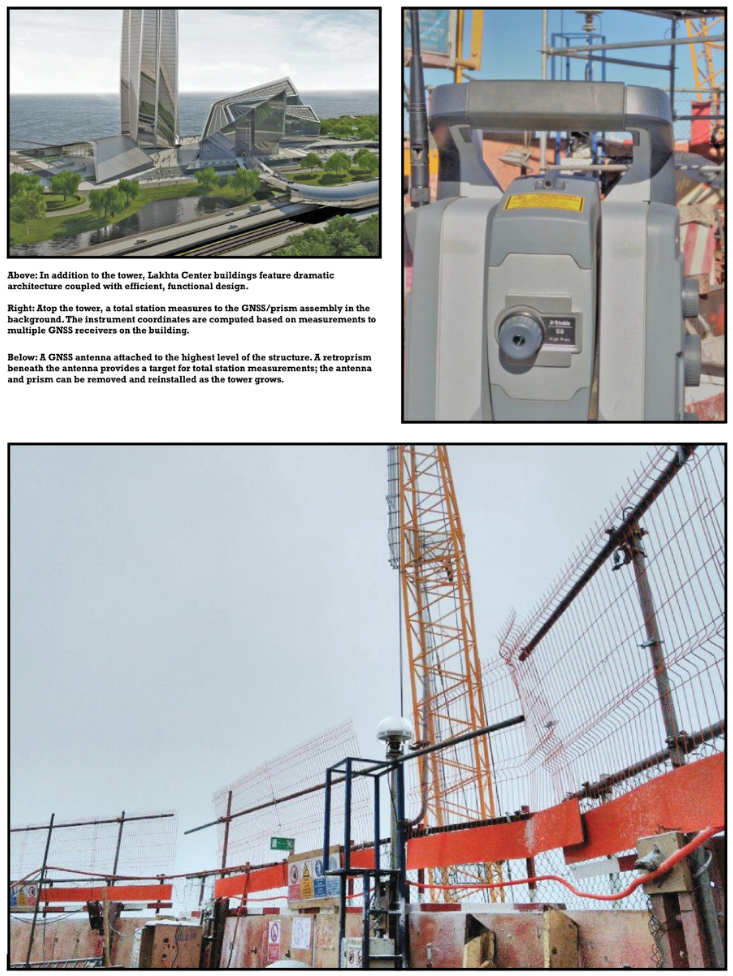 To handle the project’s demanding requirements, Renaissance Construction turned to GNSS technologies. The company implemented a solution that combines GNSS receivers with monitoring and analysis software to provide high levels of precision and confidence. Ozaslan said that the positioning system at Lakhta Center uses multiple networks of GNSS receivers working together. The approach provides a high level of redundancy to ensure integrity of the control networks and precise positioning on the tower.

The measurement solution consists of Trimble NetR9 GNSS re- ceivers installed on permanent mounts on the ground around the construction site. The receivers stream data to Trimble 4D (T4D) Control software at the Renaissance project office. Five more receivers are placed on sturdy mounts attached to the top of the building. As the building grows upward, the mounts and receivers are repositioned to new, higher locations.

The on-building mounts include small prism targets located directly below the GNSS antenna phase center. The GNSS re- ceivers connect to the T4D server through a dedicated Wi-Fi communications network. 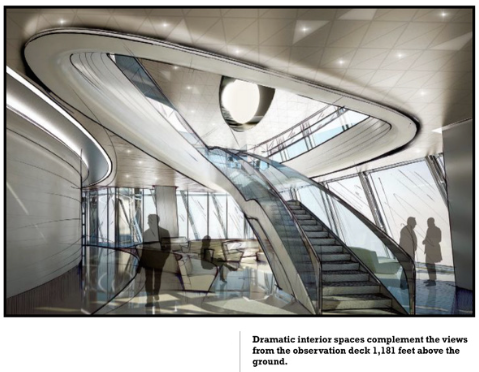 The system is configured to operate three RTK engines simultaneously within the T4D software. The ground-based receivers form a small-time network on the site. It uses one RTK engine to connect each receiver to a single geodetic control point in Saint Petersburg, roughly 5.5 miles away.

The geodetic control point provides a stable, independent reference for the project as well as a tie to the high-precision coordinate grid. The distance to the geodetic point ensures that it is not affected by any activity at the construction site. The receiver positions are updat- ed using a weighted mean filter with a one-hour time window.

With the tie to geodetic control in place, a second RTK engine is used to monitor the relative locations be- tween the on-site receivers. The system provides precise data on the position of the receivers and detects any motion. It produces regular updates on the performance and any changes in the receiver network.

The computations are configured to use a weighted mean filter with a one- to two-minute time window. As the construction proceeds, the coordinates of the tower receivers are computed and checked for integrity and precision.

In addition to GNSS measurement, Renaissance has installed a network of digital tilt sensors into the tower. Data from these sensors flows to the T4D software where it is used in computations and adjustments of the measured positions. To produce coordinates for the prism targets on the building, the software applies a vertical offset from the antenna down to the prism. The system uses the Trimble High Rise application to automatically retrieve the coor- dinates from the T4D database and load them into Trimble TSC3 field controllers.

With completion of Lakhta Center scheduled for 2018, the Renaissance team has no room for error. Rigorous checking and multiple RTK calculation loops assure strong internal integrity. Automated operation ensures that surveyors always have accurate information and alerts key personnel to any movement or changes in system status.

Ozaslan said that the solution is an important part of the construction effort.

“For vertical construction, it’s vital to have accurate, up-to-the minute information on the structure,” he said. “The monitoring system and infield software help us perform efficiently and with high confidence.”