Surveying is and always has been molded by external influences: markets, technologies, economic conditions, demographics, and competition from outside of the profession. Other professionals, consumers, and prosumers have found that the legacy mysteries of precise measurement are within reach (while also wholly misunderstanding the professional and legal aspects of surveying).

These developments have converged with recent re-examinations of a long-thought immutable element of professions: licensing. Recent court challenges to licensure have set the stage for dramatic changes ahead. Right or wrong, these developments need to be discussed.

Instead of ignoring the possibility of such changes, one of our regular contributors, Al Butler, tackles the question, “What do we do next?” by examining how the profession could prepare for what was previously assumed unthinkable. Al also provides suggestions on how the educational arm of the profession could prepare for a future that may be more certification-oriented than strictly regulated or licensed as it is today.

While our publication stands neutral regarding op-ed articles we run, we do endorse an open and frank dialogue on such important subjects like the future of surveying.

Through key cases in recent years, the current structure of state regulation and licensure of professions has been ruled unconstitutional by multiple courts, so potentially it might be only a matter of time before licensing and regulation of certain professions disappears from state statutes and administrative rules.

The issue today is less about whether the surveying profession will be deregulated and more about what the profession might have to develop to replace state licensing laws. While we are at it, we might as well address the profession-building needs of all three core geomatics fields: surveying, photogrammetry, and mapping.

What Is the True Scope of the Profession?

Before we describe the problem and propose a solution, we need to agree on the scope of the surveying profession. The basic premise of this article is that surveying, photogrammetry, and mapping represent three distinct, partially overlapping fields of work, and the work of each field is sufficiently different that it represents its own separate professional skill set.

I specifically use the word “mapping” here because I believe that using a geographic information system (GIS) is not a profession in the same way that being an expert in using a total station does not make one a surveyor. I believe GIS is a tool that can be used by many professions.

Not everyone agrees with the premise that the geomatics field includes three (or more) areas of work. In a lot of states, photogrammetrists agreed to define their field as part of surveying in order to get the benefits of qualifications-based selection procurements. Surveyors went along with this arrangement because it made their organizations–and political clout–larger, in addition to partially dealing with the declining number of newly licensed surveyors.

Practitioners in the mapping field, however, have strongly resisted efforts to similarly expand the scope of the state-licensed profession of surveying to include all types of mapping. This resistance, which has no single point of representation, has met with marginal success, and the question of regulating mapping practices at the state level remains a subject of continued legislative pressure from the surveying and/or photogrammetry professions.

Broadening the Profession through Legislation

For example, the Virginia legislature recently considered a bill (House Bill 2145) that would remove an exemption in state law that allowed some mapping work to be done by unlicensed practitioners. The exemption says a surveying license is not required to “(i) determine topography or contours, or to depict physical improvements, provided such maps or other documents shall not be used for the design, modification, or construction of improvements to real property or for flood plain determination, or (ii) graphically show existing property lines and boundaries on maps or other documents provided such depicted property lines and boundaries shall only be used for general information” [Code of Virginia ¤ 54.1-402.C].

Some people in the surveying and photogrammetry fields considered this exemption to be a loophole. The mapping profession sees it as reasonable recognition that not all mapping work needs to be done under the direct supervision of a licensed person.

Instead of trying to broaden the scope of the profession through legislation, the profession needs to embrace focused and voluntary certification as its long-term foundation.

An exemption like this is also an exemption in the requirement for qualifications-based selection, which means that companies competing to do such work will have to do so on the basis of technical capabilities and price. If I could reduce the number of potential competitors (those without a Virginia surveying license) and remove price from the equation, I would be all for it, so I understand the motive here.

The problem with such legislation is that federal and state courts have already ruled such laws expanding the scope of licensed surveying practice to photogrammetry and mapping to be invalid. In fact, the U.S. Supreme Court has ruled, in a 2015 case on restraint of trade, that state licensure and regulation, as it is currently practiced, is unconstitutional and monopolistic. (More on this in Part 2.)

As a result, state licensure is not a long-term solution to preserve the surveying profession and truly protect the public, regardless of how many “professions” it seeks to include. With licensure possibly not being viable in the long term, professional certification must be part of the solution to the problems being faced by the surveying profession. Instead of trying to broaden the scope of the profession through legislation, the profession needs to embrace focused and voluntary certification as its long-term foundation.

It is also not useful to expand the scope of surveying to include all geospatial professions because the path to professional status is becoming unsustainable. Becoming a member of the surveying profession is traditionally and strongly based on field experience acquired through apprenticeship.

Unfortunately, from the perspective of developing new surveyors, the profession has mechanized the field work to the point that one-man crews are common. Even two-man crews rarely include a licensed surveyor. How do you apprentice on a one-man crew, with up to a dozen crews being supervised by a single licensed professional? Photogrammetry and mapping have also been greatly changed by technology; however, one-man “crews” were always the norm in these fields. 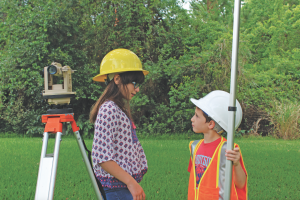 By the time these kids are practicing surveyors, licensing and regulation of certain professions may disappear from state statutes and administrative rules.

Technological advances in all three fields make it mechanically easier to practice the profession but have done little to alter the aspects of the work that make it truly that of a professional person. In surveying, the rules of evidence and the research they require–and the judgments that must be made–define what I feel is the core professional aspect of the field. For mapping, the core aspects are understanding the limitations of the available data and creating a product that fairly and clearly communicates what is intended.

We must find ways to teach the professional aspects of all geomatics fields so that extensive apprenticeship periods are not mandated.

Surveying and, sometimes, photogrammetry are currently subject to state regulation through licensure. Mapping is, thus far, substantially unregulated, although various certification credentials are available. You can be a GIS Professional (GISP) just like you can be a Project Management Professional (PMP) or an Emergency Number Professional (ENP)–I am or have been all of these–in order to demonstrate a particular level of competence in these areas, but they do not really define who you are as a professional person.

A GISP may work with spatial data in many fields of application, just as a PMP may apply project management skills by managing a construction project or developing new software. A GISP is just as likely to be a professional forester as she is a biologist or planner.

Many licensed surveyors have used the fact they are licensed by the state to justify a superior status relative to other professions that are not licensed, like mapping, or to even conclude that practitioners in these other geomatics fields are not professionals because they are not licensed. By this logic, will the deregulation of the surveying profession result in its declassification as a profession?

I respectfully submit that the claimed distinction between licensure and certification as a way to define a “true” profession is an artificial premise of a failed regulatory regime. Licensure has never served the surveying profession well; it was merely a faade for a weak framework that ultimately fails to define it.

There is only one option, in my opinion, for the future: voluntary certification following clarification of the scope of professional surveying. This model is successful in other industrialized nations (e.g. Sweden) where there are no surveying licenses but instead rigorous certification and education–without a loss of respect or stature for the profession.