Above: UNAVCO/PBO station P655 with Mt. Shasta in the background.

I am currently the NGS-recognized geodetic coordinator for California, appointed through my affiliation with the California Spatial Reference Center (CSRC), which is based out of UC San Diego, where I currently serve as the vice chair of the CSRC Executive Committee.

I am also the chair of the Western Region Height Modernization Consortium, a group that covers 11 Western states. We were formed in 2014 with the support of the National Geodetic Survey (NGS) to create a networking opportunity for folks dealing with height-related issues in the Western United States.

I’ve been a licensed land surveyor in California for 30 years. I’ve done a lot of boundary and other surveying work in my professional career, but the last 15 years have been focused more on geodesy. I was the chief of the geodetic branch for the California Department of Water Resources for almost ten years prior to coming to Caltrans five years ago. [Scott is also editor of xyHt’s newsletter, Field Notes.]

What is the interplay and the division of labor between seismologists, geodesists, and surveyors? How has that relationship changed over the years?

I’m going to speak more from a California perspective, which I think is probably a little different (or maybe a lot different) than how that synergy exists elsewhere in the continental United States and elsewhere in the world. That’s primarily due to the dynamic geophysical nature of California, where the plate boundaries between the Pacific and North American plate that run along our coastline create a dynamic situation with secular tectonic plate velocities that cause our positional integrity relative to the reference frame to deteriorate very rapidly over time.

“Users have developed a dependency on an infrastructure that state government does not own, operate, or maintain in any way.”

In California, the spatial referencing community had a vision of building out our own geodetic reference system back in the early 2000s, when the CSRC developed a “master plan.” What actually evolved was very similar to what was envisioned at that time, but was accomplished, in collaboration with the CSRC, by the earthquake and scientific community.

This was primarily UNAVCO and its Plate Boundary Observatory (PBO) [UNAVCO is a non-profit, university-governed consortium that facilitates geoscience research and education using geodesy]. In the mid- to late-2000s, as part of the EarthScope project, they came into California and installed 600+ continuous GPS stations along with other seismic-related instrumentation. This essentially created an opportunity for the geospatial and surveying community to piggyback on their infrastructure without having to bear the costs of actually building it out. 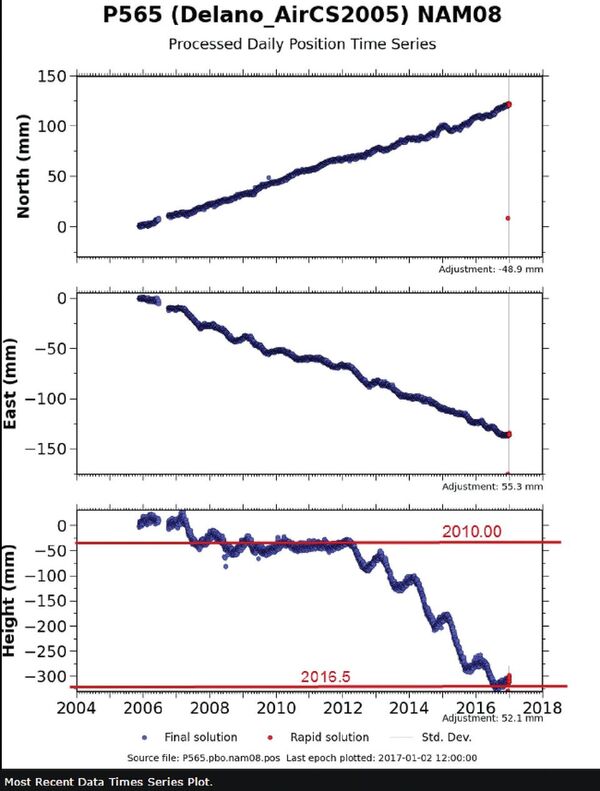 This time series plot of PBO station P565 shows the north and east (negative, so actually west) horizontal velocity, as well as the sinusoidal vertical movement and drought-induced subsidence.

What is Caltrans’ role in UNAVCO?

We at Caltrans have had a long partnership with UNAVCO’s PBO, from the time they came into California back around 2004 or 2005. We worked with them to permit approximately 40-45 of their stations in Caltrans right of way or at Caltrans facilities.

Caltrans has an internal real-time network for use by Caltrans staff and state transportation partners, and we pull in data streams from PBO stations to utilize in our real-time network configuration, thus saving us the cost of building the stations. PBO engineers continue to maintain those stations when they have telemetry issues or other problems. So, we have partnered with them since they began here and continue to do so.

For most surveyors, unless they are working on a large structure such as a dam, do these shifts matter?

There are many different disciplines within the practice of land surveying, and you’re absolutely correct: for a local surveyor, say, working in a rural area of California, doing small subdivisions or boundary resolution for a private client or landowner (unless there’s some sort of local ordinance requiring the work to be tied to the California State Plane Coordinate System or national reference frame), they really never have to engage themselves in using geodetic control other than maybe having to study for passing a license exam.

You’re right in the boundary world: generally the monument in the ground is where the boundary is, what the coordinate of that mark is relative to any reference frame is really immaterial to the establishment of boundaries. There are some counties and cities in California that have ordinances that require work to be tied to a specific control network, but this is the exception rather than the rule.

As a state agency, all engineering surveys are referenced to the California State Plane Coordinate System, which is a derivative of the National Spatial Reference System. So, for surveyors who work on projects that cover large geographic areas or are working for entities that require that the deliverables be tied to a common reference frame, the positional integrity of geodetic control over time and space is a concern.

The vertical measurement is the weak spot of GNSS, but it is critical in some of the contexts that we are discussing. How do you handle that?

It’s a rule of thumb that the vertical error ellipses are about twice what they are horizontally when using GPS/GNSS techniques, regardless of the duration of the observations, the care taken in the measurements, or the quality of the equipment you’re using.

There are many areas in California, especially in the Central Valley, which have a seasonal sinusoidal pattern in the vertical component. If you want to monitor elevation changes, there are techniques you can employ and data you can look at to help you determine the stability of the control you plan to use. So, you can eliminate or reduce some of the noise in your data.

For example, I’ve been involved with several subsidence monitoring projects in California that are always done at the same time of year, primarily to eliminate that seasonal influence, sometimes four or five centimeters up or down, so that you’re not biasing your monitoring program data.

I also think that if you’re going to really be concerned with monitoring changes in heights, you can do so by using ellipsoid heights and not introducing the hybrid geoid model to try to determine orthometric heights, because then you enter another model into the data that has variable accuracies over geographic space. If you do things at the same time of year with the same equipment in the same ways, and you’re looking at changes in ellipsoid heights, I think that centimeter or even sub-centimeter level accuracies and comparisons are possible.

Following an earthquake, what would be the priorities in re-establishing geodetic control, and how do you prepare to do that quickly?

One of the challenges with trying to restore the geodetic infrastructure as quickly as you possibly can after an episodic event is that the post-seismic displacement continues for a period of time.

Even if you were capable of safely deploying all the resources needed within a matter of days after a major event and aftershocks, I don’t think that would be time and money well spent. There are daily positional calculations of continuous GPS stations which can be used to determine how far-reaching the disruption was, what the magnitude of the displacements were, and if they are continuing.

I think you are better off to monitor movement, then come in after everything has settled down, restore the geodetic infrastructure over the whole region that was disrupted, and then update all the positional values at that time.

In the interim, there are remote sensing technologies, such as InSAR or lidar, that agencies such as the US Geological Survey (USGS) would almost certainly be using to look at change detection before and after a seismic event to see where vertical and horizontal displacements occurred. These data could be used by others to evaluate damage to subsurface infrastructure. It all depends on the magnitude of the quake, of course.

For example, the August 2014 South Napa quake was about a 6 on the Richter scale, and there was very serious localized damage, but there was only one continuous GPS station within the sphere of the displacement that was impacted by that earthquake, and it only moved about 3 cm horizontally. Eventually, after everything settled down and they got a good fix on the new position, NGS did update the position on that continuously operating reference station (CORS). 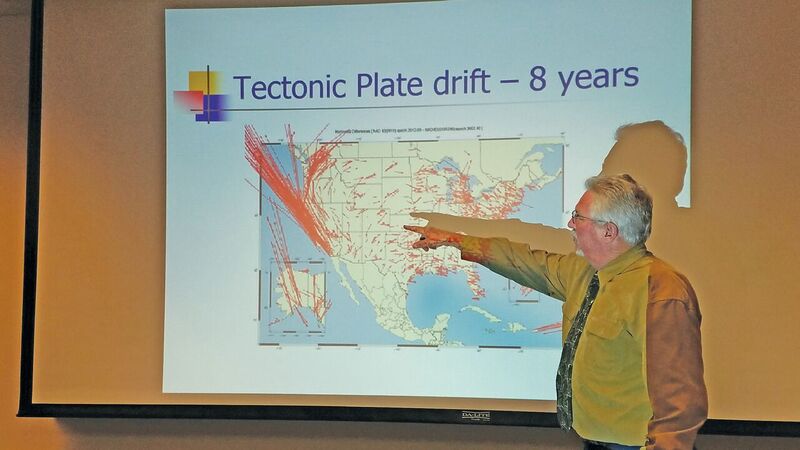 Scott Martin presents on reference frames, datums, and survey control, pointing to a graphic quantifying movement across CONUS relative to the reference system (NAD83) over an eight-year period. California’s vectors are literally “off the map.”

As far as the infrastructure, if you’re a public works department and you’ve got broken-up streets or bridges or underground utilities, you’re going to be faced with, “Let’s find something that we’ll assume is our benchmark and just make everything conform to that, make sure it all goes downhill, and we’ll worry later about where it is in the reference system.” You do what you’ve got to do to get things put back together.

As explained in the GCWG Geodetic Report Card, in California we really do need to come up with a long-term solution for sustainable geodetic infrastructure. Users have developed a dependency, in a way, on an infrastructure that state government does not own, operate, or maintain in any way.

California leads and promotes new technologies; we have Silicon Valley, we have all of these things going on that have positional components. We need to find a more sustainable solution. This challenge is one of the things I hope to be part of in the remainder of my career.

“Geodetic Control over Time and Space in California” Comments