A wealthy investor on the other end of the line said, “Juan, I understand you are photogrammetrist and a pilot. Are you ready for a challenge? I bought six Citation jets in a government auction, and I want you to help me turn them into a modern aerial photography platform.”

For those of us who love aviation, one of the great benefits of modern photogrammetry is that the images required to elaborate maps are taken from airplanes.

In the early 1980s I worked as a navigator for aerial photography in aircraft as varied as Learjets, light twin Cessnas and even a Mitchell B-25 from WWII. I accumulated about 750 hours of flight time and loved every minute of it.

In 2006 I finally decided to obtain my FAA pilot’s license, which, combined with my Geodesy degree, made a perfect match for my next professional adventure. 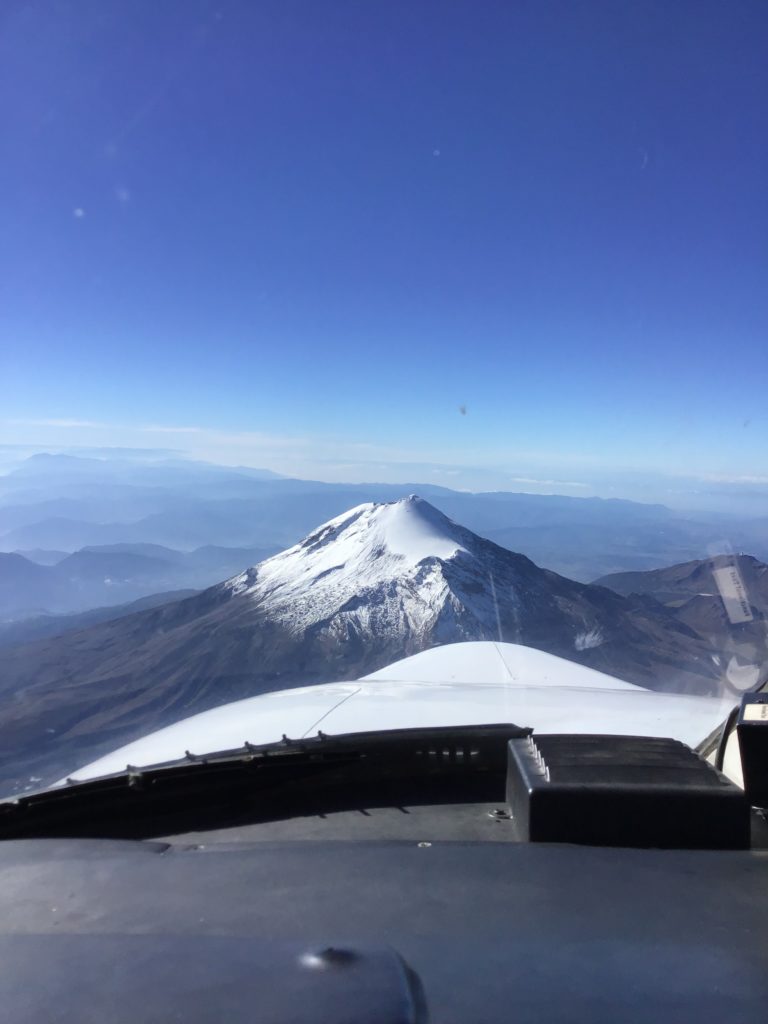 The Citation jet for photogrammetry approaches Pico de Orizaba, the third highest peak in North America at 18,491 feet above sea level, on a photogrammetry mission.

Then in 2015 the phone rang and all of my education, training and preparation met the right opportunity at the right time.

A wealthy investor on the other end of the phone line said, “Juan, I understand you are photogrammetrist and a pilot. Are you ready for a challenge?” After a few seconds of an uncomfortable pause I said I was, and I inquired about his intentions. “I bought six Citation jets in a government auction, and I want you to help me turn them into modern aerial photography platform. Can you do that for me?” he asked.

This time there was no pause whatsoever. “Yes,” I said. I was so excited I was almost shouting.

The aircraft in question were located in Conroe, Texas, at Conroe-North Houston Regional Airport, about 20 miles north of Houston. I flew there to get acquainted with my new fleet.

These particular aircraft were manufactured by Cessna in the late 1980s following a Special Type Certificate (STC) of the federal government that required a large external pod on the right side and a bulbous nose cone to house the F-16 radar that would give it a tactical advantage.

Of course all these refinements and confidential equipment had been removed, so what I received from the government auction were gutted airplanes without much avionics and in dire need of maintenance to become airworthy again.

We found a great mechanic shop in the airfield and hired it to perform the necessary inspections and repairs to rebuild the fleet.

With the avionics it was a different story. The entire panel needed to be redone. We hired a local avionics shop to upgrade the instruments to a Garmin panel, entirely electronic and with tactile screens.

Then came the issue of the cameras. For that my investor sent me some experts from his company and a hand-drawn diagram of what he wanted.

The plan was to install five PhaseOne Industrial cameras in a special platform with three cameras installed along the axis of the aircraft and two cameras mounted looking sideways with a 15-degree tilt to add density on each side of the flight path.

The specific camera selected for our platform was the PhaseOne iXU with a resolution of 100 megapixels and a new triggering mechanism that would allow photographs to be taken in intervals of less than two seconds. This refinement was a key determinant in the selection of the camera because we were planning to fly at 240 knots (276 mph) and at that speed we needed a fast leaf shutter to accomplish the necessary longitudinal overlap.

Because the Citation jet is a pressurized aircraft, we encountered the challenge of deciding whether to place the cameras outside or inside the fuselage.

Placing the cameras inside the fuselage would have meant another modification to the aircraft, adding a rectified glass that would cover the existing hole and permit pressurization. Unfortunately, these modifications were prohibitively expensive, and it would take almost a year of permits and engineering. So we decided to leave the cameras outside the pressurization firewall.

Then came the issue of the amount of data generated by the cameras. Each photograph taken by an iXU is about 25 megabites (MB), which means that the five cameras would be generating 125 MB of data every two seconds.

To solve that problem, we used a PhaseOne controller that was designed specifically to handle large amounts of data for up to six cameras. The iX Controller MK4 was installed on the navigator’s table and received the cables coming from the camera cylinder through an orifice that was specially sealed to support the pressurization of the aircraft.

To solve the issue of precision in flight we added a NavCom Geodetic GNSS receiver to add coordinates to the photography and to ensure that flight paths will be accurate within a few yards on the ground, a precision that would be impossible with the navigational equipment on board.

Finally, the base with the camera was installed on the aircraft, the cables connected, and we were ready for our first test flight.

The test flight revealed a few glitches in the set up that were quickly corrected, so after seven months of non-stop work, our first bird was ready to take cartographic images.

Our first mission was in Houston, where we took a beautiful picture of the NASA complex. Then came San Diego where we could capture a stunning image of an aircraft carrier. Then came a real challenge.

We received notice that our colleagues in Mexico were having trouble completing a project for the State of Puebla with the Piper Aztec assigned to the mission. The highest volcano in North America, Pico de Orizaba, is located in Puebla and its massive, 18,500-foot caldera was unreachable by the piston engine aircraft, so we were deployed to the area. 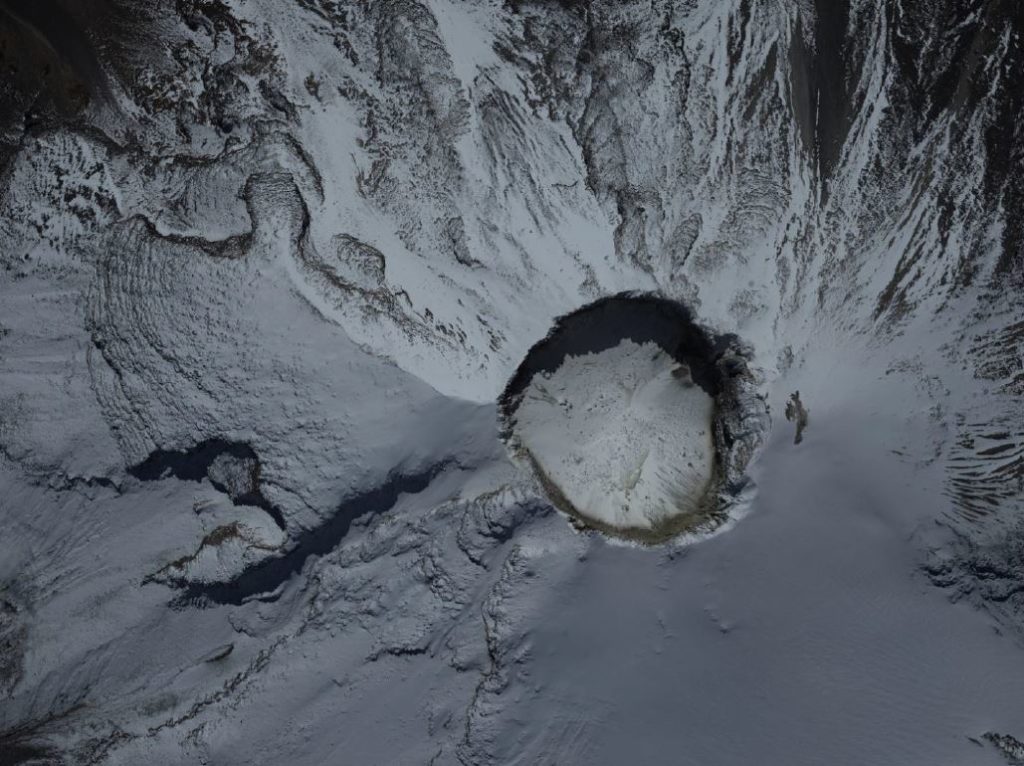 The Phase I iXU camera captured this image above Pico de Orizaba. 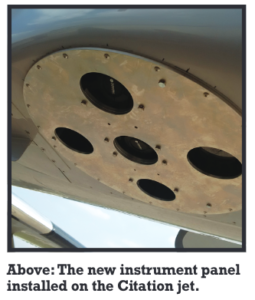 After careful consideration of the flight lines we waited for the right weather conditions. Flying so close to a tall volcano can be treacherous if the winds are not right and the visibility is not absolutely perfect.

A few days later, the opportunity came with blue skies, light winds, and unlimited visibility. We took off from the Pachuca airport and flew 80 miles southeast while climbing to 15,000 feet, our first line altitude.

We flew the line with an orientation east-west and then while turning for the next line, we climbed 500 feet to adapt our AGL (Above Ground Level) altitude to the steep slope of the volcano. 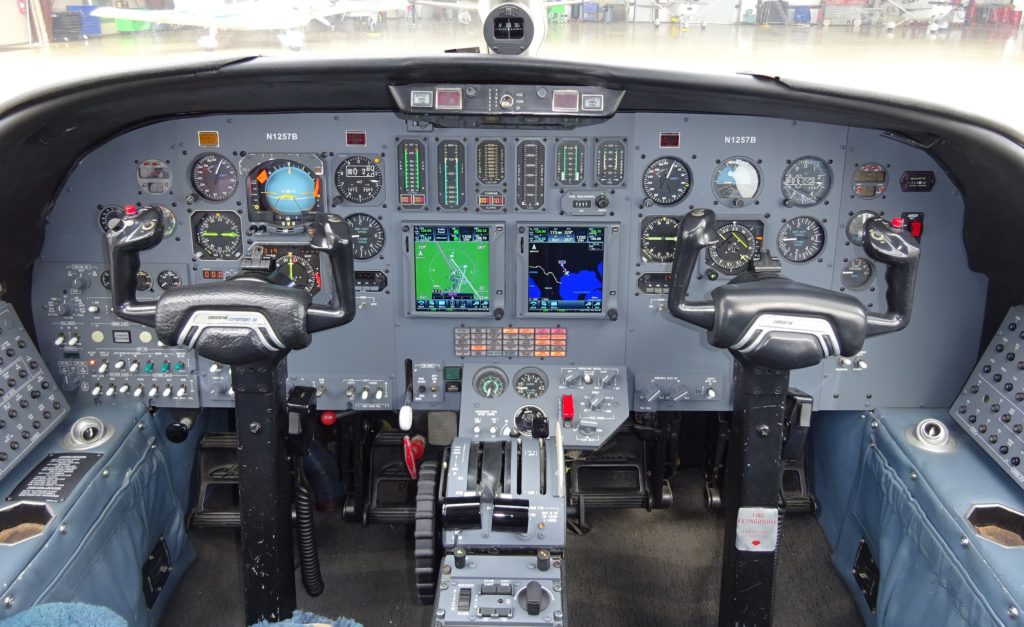 The Phase I cameras from the bottom of the Citation jet.

We flew for more than three hours until we reached the last line, directly above the dormant, but not extinct volcano, exactly at 22,500 feet.

The photos are stunning, and our new jet platform allowed the company to complete a job that would require months in a piston engine, in just a few hours. Even though the operational costs of a jet aircraft are considerably higher than a single engine or even a light twin, the flexibility and productivity of the five-camera array flown high and fast proved to be effective and cost efficient.

We now operate a mixed fleet of Piper Aztecs equipped with lidar and the Citation jets with the digital cameras to complete our missions in record time and with the highest precision possible.

Since this initial mission, we have completed the upgrade of two more of the original Citations and now the fleet includes three fully operational jets.

An idea that originally I thought was far fetched proved to be correct and the results speak for themselves.