Professions benefit from having strong relationships with all the communities they serve. From recruitment and succession planning, to presenting a positive image, to simply being good business: diversity enriches. How could any efforts to broaden such relationships be viewed as anything other than positive?

Surveying, as with many professions and fields, has grown and evolved over a long history of changing socioeconomic environments and social mores. The result is that the profession does not, in all respects, reflect the expanding communities it serves. Few would argue that the profession should not explore this subject. And indeed, within the past year in particular, we have seen concerted efforts from within the surveying community—and across the nation—to step out of the comfort zone of falling back on “It is what it is”. No more ducking or dismissing touchy subjects with such acquiescence—challenges and changes are too big to ignore.

On July 2nd, 2020, the national Society of Professional Surveyors (NSPS) released a statement on diversity, via its News and Views e-newsletter:

“We stand with the rest of the Country to express our deep concern with the state of affairs throughout our Nation. It is the hope of the leadership of the National Society of Professional Surveyors that we, as a Nation, can come together to resolve injustices and inequalities, increase diversity and head on a path of healing and equal opportunity and treatment for all. NSPS recognizes the importance and value of all forms of diversity in our profession and has formed a Diversity Committee to assure that we are inclusive and welcoming to all.” – NSPS

The desire for change was already in the air for the surveying profession. We have seen a rebirth of women surveyor focused meetings and activities. Prominent among this activity was the very successful Women Surveyors Summit 2019, and a renewed interest in the pioneering work of the NSPS Forum for Women in Surveying of the 1980’s. 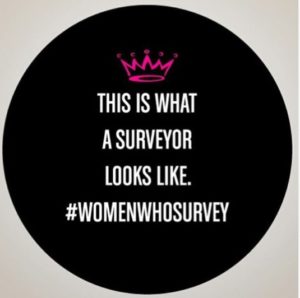 Many of the most successful recent outreach efforts to encourage young people to consider surveying careers were created by women. For example, Class of Your Own is the brainchild of a UK surveyor Alison Watson who was awarded an MBE by the Queen for her initiatives. NSPS VP-Elect, Amanda Allred, who was among the honorees of xyHt’s inaugural 40 Outstanding Geospatial Professionals Under 40 in 2016, has been on a roll, utilizing social media to reach out with messages promoting surveying, diversity in surveying, and women in surveying. You can now find online promotional materials with messaging like:

All these initiatives are important and will certainly be key to the continued growth and succession planning for surveying. But there is more work that needs to be done—far more. It is not a simple as buying some gear or sponsoring a poster. There are key challenges that must be addressed internally within the profession. And while the events of these past few months have profoundly opened dialogues on the subject on a global scale, the surveying profession may need to further reflect, reconsider, and reinvent its image and brand.

The surveying profession would be well served to try to help reverse a disturbing trend: the mischaracterization by some, (mostly) outside of the profession, of the word “diversity”. Diversity is not a bad word, but in recent years, there are many voices that cast it as an invective, a term ridiculed, and the subject dismissed by a convenient cop out as being “too PC”. The trend seems accentuated by a recent global revanchist wave—that appears to be finally ebbing.

We do not need to understand or agree with the underlying thinking behind the words and deeds of the relative few who have demonized the term and turned it into a societal wedge issue. We can press on, despite it, with keeping our own profession above the fray. The tired rhetoric of those adverse to diversity often relies on mischaracterization, and straw man arguments about “quotas”, or preferential treatment, or lowering standards. Such scare tactics may have roots in a fear of change, or generational mores, but could the profession do its part to at least not perpetuate these?

It was only a few years ago when I read something, something that I initially found bit shocking, in a surveying publication: “Diversity for its own sake is foible, a failure of intellect.” This was penned by a (then) top officer of a surveying society. Perhaps a poor choice of words, at the very least, and the benefit of the doubt should apply—but the words are out there. To be fair, the context of the statement was in a paragraph that discussed the idea that “Diversity” as a goal outweighs aptitude and talent”—though the discussion provided no evidence at all that there is anyone entertaining the idea of lowering standards to boost diversity, or any such thing. No matter what the intentions were for this, there are several problems with such statements—especially in the present day—that even volumes of explanation and rationalization could not erase.

First is that inflammatory language was used with regards to the term diversity. No matter what the context, calling something a “failure of intellect” is terribly dismissive and condescending.

Second is that, even if not intended, such words can reinforce negative views towards diversity. I, in all my years as a surveyor, have run into very few who are directly opposed to the profession better reflecting the communities we serve. But such statements can and will be taken out of context; music to the ears of the few who oppose diversity. It only takes a few to make the whole look bad.

Third, and no less troubling than the others, is that it was responding to a straw man proposition. No one is seriously talking about implementing quotas, lowering standards, or any such initiatives in the name of diversity in surveying.  This isn’t the mid 20th Century where such ideas were argued about, this is the 21st Century—diversity today is about reaching out, opening your eyes and ears, reflection, inclusion, and building stronger ties to communities. 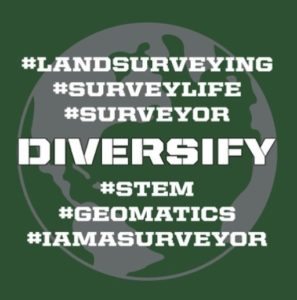 We must be brave enough to take a stand and remind our fellow surveyors that we all represent this honorable profession—but we need to act professional and behave honorably. It only takes a few to tarnish the image of the profession.

I see reminders of both how far we have come, but also how far we have to go, every day. For example, in the April 2020 issue of xyHt our main feature was a collection of essays, from surveyors all over the world. One was from a bright young woman surveyor in Eastern Europe, a wonderful and inspiring look at what motivated a young person to join the profession. After publication, I posted the article link multiple surveying related social media sites and pages, something we always do. Then the disturbing comments about her photo rolled in…. comments from some male surveyors ranging from infantile fixation on anatomy, to outright misogynistic remarks. I deleted the post and re-posted, only to find these folks quite persistent. I repeated this 4 times before having to block them. An anecdote—but it illustrates that the few who could tarnish the image of the profession can pop up under what should otherwise be innocuous circumstances.

I do not think many would dispute that, for whatever the reasons—history, society, “traditional roles”, or other—the surveying profession is predominantly older white men (me included). I am not saying that is bad or problematic, not at all. It is just that we must try not to let a few in our profession reinforce, through their words and actions, unfortunate and mostly mischaracterized stereotypes attributed to the same. I am not saying we become thought police, ostracize, or discourage a diversity of views, but offer more of a thoughtful and gentle reminder that we are a profession in the public eye.

It seems there is a lot of reflection of late; people examining their own long held views and pasts, with a desire to learn and grow. I am not alone in doing so as well—and accept that I have a long way to go. I applaud the NSPS for finally issuing the recent statement and committing to addressing the subject. And I am in awe of the energy and commitment of many, like those mentioned above, who are leading our profession on this path to growth and understanding.