In the 1990s I was very fortunate to get in on the ground floor of 3D laser scanning technology with a startup often credited with pioneering the technology: Cyra Technologies.

In Part 1 I wrote about working at Trimble Navigation when, in 1996, the company was approached by the CEO of a startup company, Cyra Technologies Inc., which was developing a 3D laser scanner and “point cloud” software. The startup CEO’s interest was in a possible strategic partnership with Trimble to jointly commercialize the technology on a large scale.

Within Trimble, the task of evaluating this opportunity wound up on my desk. I was subsequently wowed by a private demonstration, prompting me to take evaluating the technology and Cyra Technologies to the next level – the subject of this Part 2.

Diving into the Evaluation

Ben Kacyra, Cyra’s co-founder and CEO, was eager to tell me his story and, after the jaw-dropping private laser scanner demo, I was eager to listen. Ben was also very interested in my views on the market potential in the survey industry and on leading survey instrument and software vendors. Within Trimble, I held a senior product marketing position for our successful GPS survey products and Ben wanted to learn as much from me as I wanted to learn from him.

We met once a month or so at Ben’s favorite restaurant in Walnut Creek for technology development updates and additional fact finding. After each meeting, I would report to my boss at Trimble what I had learned and asses my boss’ level of interest in my ongoing evaluation, plus get his thoughts about possible next steps.

At the top of my evaluation checklist was understanding why this technology was being developed. In particular, I wanted to know if this was something “cool” that an R&D engineer had stumbled upon in a lab or was it being driven as a potential solution to a market need or problem?

Based on some formal business training that I’d received in the 1970s while I was a new business development engineer at Air Products Inc., I had learned that statistically 90 percent of all successful new products are developed as a solution to an identified market need. Only 10 percent are stumbled upon via basic scientific or engineering research. That doesn’t mean that some of those 10 percent ideas aren’t good–some are great–but the business odds of success are nine times higher if a technology is developed to meet an identified need.

Earlier in my career I had been approached by a former colleague about joining a startup. The startup was being launched to market a new material that had been developed. The new material had some interesting physical properties (along with some shortcomings) and my role would have been to try to find commercial applications for it. Since the new material was not developed with any market need in mind, and I was worried about some of its shortcomings, I passed on the opportunity. The material never made it into the commercial market.

In Ben’s/Cyra’s case, I was able to check the “Was it developed to meet a market need?” box with a big checkmark.

Ben explained how he came up with the 3D laser scanning idea. Prior to Cyra, Ben, a civil/structural engineer, had founded and grown an AEC consulting engineering company, Cygna Engineering, based in Oakland, California, into a 450-person firm. The firm was listed among ENR’s top 100 AEC engineering firms. Among the consulting services that Cygna provided was engineering design for nuclear power plant retrofits in California. Someone had astutely figured out that having nuclear power plants near California’s earthquake faults was not such a good idea, so there was a lot of nuclear seismic retrofit business in the 1980s.

This image of potential construction problems, due to bad as-built data, was a regular in Ben Kacyra’s early presentations to prospective clients and partners.

Ben explained that while you can use original construction and design drawings as an “as-built,” things are never built exactly to construction drawings. In addition, over time, there may have been maintenance or other post-construction changes. So, to ensure current, accurate as-built information, common practice for plant retrofit projects is to perform a new “as-built” survey–going to the plant to measure the actual, existing plant geometry.

Capturing accurate as-builts for nuclear power plants is especially challenging. First, they’re packed with complex piping and structures, many elevated well above the plant’s floor. Second, the time window available to do as-built data capture for power plants is often fixed and short. They’re typically done when the plant is shut down for maintenance turnarounds; plus, staff must be properly trained, suited up, and authorized in advance.

The method that Cygna engineers and techs used to capture the plant’s as-built information was manual: tape and sketch pad, what virtually everyone did for as-builts. But, Ben explained, there were problems with manual measuring and recording. They were time consuming and could be hazardous, as staff had to climb to try to get some measurements. What’s more, Ben explained, manually collected as-built results were prone to error–in measurement dimensions, in omission of pipes or structural elements, in orientation of objects, etc.

construction schedule delays. In the worst case, the power plant would be “down” or out-of-service longer than planned. 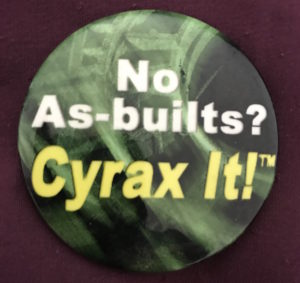 As Ben pondered this “as-built problem,” he reflected on two things.

One was that while office design and drafting work was being automated in the mid-1980s via CADD, as-built data capture was not automated at all–yet. At Cygna, and elsewhere in the mid-1980s, CADD was the new rage. Ben, himself, had invested in a large, expensive CADD system for his firm.

The second thing Ben thought about was his earlier personal construction experience and his civil engineering education at the University of Illinois. As part of his education, he’d taken a surveying class. He wondered if there was a way to use surveying and/or other remote distance sensing technology in a rapid data capture mode to remotely capture as-built geometry of these power plants. The idea was to safely and quickly capture accurate as-built information with no measurement errors, no omissions, no incorrect orientations–and automated, just like CADD.

He was thinking of a new way to solve “the as-built problem.”

Until Ben described “as-builts” for me, I had never heard the term. I’m not a surveyor by education or experience, nor had I worked in the retrofit design/construction world. I had no idea how big that “as-built” market was, but for my technology evaluation checklist, Cyra’s 3D laser scanning technology was indeed being developed to solve a problem. And that was very good.