A frank discussion of the different heights used in surveying, what’s inside a geoid model, and how geoid model data is used within GNSS software to produce elevations.

Certainly most geospatial professionals who have used Global Navigation Satellite Systems (GNSS) within their surveying workflows have come across the term “geoid model” before. But who actually knows what data is contained within a geoid model? Further yet, who knows how this data is used in conjunction with a GNSS-derived position to produce point elevations within a specific vertical datum? I assume that not many readers have answers to these questions, and likely most have not even pondered these questions before.

Surveyors know that we should select and set the appropriate geoid model within our RTK collection software or static post-processing software in order to produce accurate elevations. But what is really happening within this process? How can we (the end user) be sure that the displayed elevation coordinates for our points of interest are accurate? This article examines the different heights used in surveying, what’s inside a geoid model, and the internal process of how geoid model data is used within GNSS software to produce elevations.

The topic of geoid models is currently in the spotlight up here in Canada, as the federal government recently released a brand-new vertical datum, the

Canadian Geodetic Vertical Datum of 2013 (CGVD2013) (Figure 1). What makes this vertical datum so different (and scary for most) is the fact that it is realized (i.e., made tangible) solely via a geoid model (Canadian Gravimetric Geoid model of 2013, CGG2013).

In short, surveying professionals are no longer required to tie in to federal benchmarks in order to establish an accurate elevation within the CGVD2013 vertical datum. A surveyor can now use GNSS positioning techniques (provided the horizontal datum of the derived GNSS positions is carefully selected and realized) along with a single geoid model to establish accurate elevations anywhere in Canada.

So, let us embrace the change and welcome the new geoid-model-based vertical datums as part of our daily workflows. Let us gain confidence in the ability to make our lives (and projects) simpler and more efficient by using geoid models and GNSS positioning to accurately determine elevations. (Note that even if your governing vertical datum is not solely realized by a geoid model but rather realized via physical tie-ins to demarcated benchmarks, the use of a geoid model in conjunction with GNSS positioning can still be very important when determining elevations.)

Ever since elementary school we all learned that the height of something is measured with respect to mean sea level (MSL).

For example, we learned that Mount Everest is 29,035 feet above sea level. As we began studying surveying/geomatics later in our lives, we learned that there is a slightly different surface than MSL that we use to measure heights from, and we call this surface the geoid.

The complete definition of what the geoid is along with where it is specifically located involves the science of physical geodesy and a firm understanding of the gravity field of the Earth (see archived issues of Professional Surveyor magazine for the basics). We will simply recognize the fact that the geoid is the reference surface (i.e., where height = 0) for the type of heights we want, and it very closely approximates MSL. Specifically, we call heights that are measured from the geoid orthometric heights or, more commonly, elevations (symbolized as H) (Figure 2).

Unfortunately, the waters become further muddied due to the fact that there are numerous horizontal datums (each utilizing a specific reference ellipsoid) used throughout different regions on the world. Hence, the term “ellipsoidal height” is ambiguous without specifying the horizontal datum being used. For example, the Global Positioning System (GPS) uses the World Geodetic System of 1984 (WGS84) as its horizontal datum. The ellipsoidal height that a GPS receiver determines will fundamentally be above or below the reference ellipsoid used in WGS84.

“But wait a minute,” you might be saying to yourself. “I know I’ve seen the term elevation displayed on my handheld GPS unit.” And you would certainly be correct. However, what is not so obvious is the fact that the manufacturer of your handheld GPS has a crude global geoid model loaded into the memory of your unit. This geoid model is used to automatically convert the GPS-derived WGS84 ellipsoidal height into an elevation (of low accuracy).

GNSS positioning methods naturally produce ellipsoidal heights, and these heights are best converted into elevations using data from a geoid model. Note that some of the experienced GNSS practitioners may use other methods for determining elevations using GNSS rather than using a geoid model; these methods can work well for small extent projects but quickly deteriorate as the extents of a project area increase.

Until only recently the ability to create an accurate wide-area geoid model was difficult. Thanks in large part to recent satellite missions, such as the Gravity field and steady-state Ocean Circulation Explorer (GOCE), new levels of precision in measuring the Earth’s gravity field have been achieved. This, in turn, has resulted in more precise and more accurate geoid models, such as CGG2013.

A geoid model is nothing more than a regularly spaced collection of geoidal undulation values over a specific geographic region.

For example, the CGG2013 geoid model has a sample spacing of two arcminutes in latitude and longitude between successive sample points (Figure 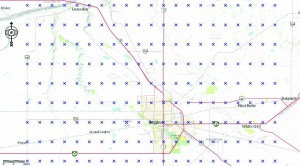 For example, the new CGG2013 geoid model used in Canada will convert NAD83 (CSRS) ellipsoidal heights into CGVD2013 elevations. If a user mistakenly uses WGS84 as the horizontal datum for his or her GNSS positioning along with the CGG2013 geoid model, the resulting elevations would not be realized within the CGVD2013 vertical datum. Hence, it cannot be stressed enough that the correct horizontal datum be realized when collecting GNSS positions where precise and accurate elevations are required. Thanks to advancements in Real-Time Networks (RTN) and Precise Point Positioning (PPP) techniques, the ability to quickly and accurately realize a specific horizontal datum using GNSS equipment is becoming commonplace within today’s industry.

How do we determine an accurate geoidal undulation for a point located in-between the geoid model sample points?

There are a variety of techniques that can be used to interpolate a specific point’s geoidal undulation value. A common method uses the nine closest 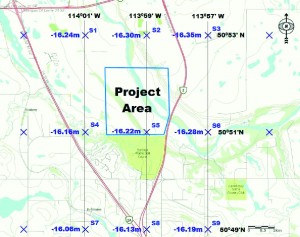 In order to use this equation we first need to solve for the values of the polynomial constants (a0 …a8). This is accomplished by using the known geoidal undulation values along with the known latitude and longitude coordinates of the nine closest geoid model sample points (S1…S9). The known geoidal undulation for each sample point and the difference in latitude and longitude coordinates between each sample point and the central sample point (S5) are substituted into the previous equation, hence creating a system of nine equations. The system of equations expressed in matrix notation would take the form shown in Equation [2].

Expressing the previous formula in a generalized way, we would write Equation [3].

The solution to the vector of unknown polynomial constants would then be expressed as Equation [4].

Finally, once the polynomial constants have been solved, they are substituted back into the original polynomial equation, and they yield the practical interpolation equation for determining an accurate geoidal undulation for a point of interest.

The interpolation equation then requires only the difference in latitude (yP) and difference in longitude (xP) coordinates between a point of interest and the central sample point (S5) in order to solve the point of interest’s geoidal undulation. Depending on the geographic location and extent of a project area, there may be several neighboring polynomial interpolation surfaces that should be used for different regions of the project area. Each polynomial interpolation surface has an applicable geographic range of half the latitudinal and longitudinal spacing of the geoid model sample points. 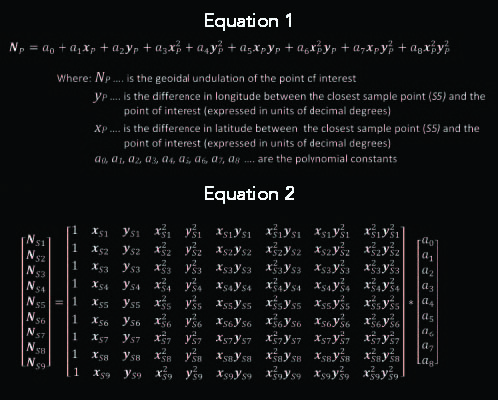 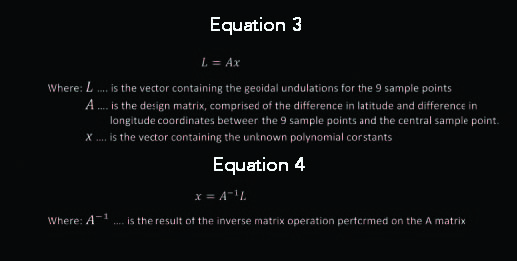 Click here for a mathematical example for testing your skills in geoid model interpolation.

Technology is sometimes viewed as being a double-edged sword, and geoid-model-based vertical datums would certainly support this view. Technology has now freed the surveying professional from the constraint of physically locating, verifying, and tying into demarcated benchmarks. While this should be viewed as a great technological advancement that will only benefit practitioners, the procedures that need to be followed to make this change a reality are quite radically different from the tried and true procedures of the past and present.

As a result, industry will most certainly be slow to adopt these technologically derived vertical datums unless people can be properly educated, informed, and trained. Even though using an automatic level to determine elevations is one of the simplest procedures within surveying, what is often overlooked is the physical state of the benchmarks themselves. In Canada, benchmarks are very rarely re-observed as part of a maintenance survey and are predominantly established near populated areas and highways for ease of access. This does not lend well to projects that are located in remote areas. Additionally, the cost to maintain the existing national network of benchmarks is extremely high. Hence, the quality of the published information with respect to a specific benchmark or local group of benchmarks can be inaccurate.

Geoid-model-based vertical datums overcome these two problems by providing a means of determining an accurate elevation virtually anywhere via GNSS positioning. They also make the determination and dissemination of vertical datum information and updates exponentially easier. This new type of vertical datum is certainly here to stay and should be adopted by surveying professionals as early as possible. Like all great technological advancements of the past, once the initial transitional hurdle is overcome, you will not be able to imagine your life without geoid-model-based vertical datums.