You’re probably going to hear a lot about a new multi-product release from Topcon; they’ve taken an interesting approach by announcing four integrated products all at once–a complete new surveying system. This includes a new flagship total station (with an ultrasonic drive), a new data controller, a new release of field/office software, and a new GNSS rover.

We were happy to get some hands-on time and an early preview. We’ll cover the whole system in more detail in the next issue of xyHt, but I was a little antsy to drill into one of the items in particular before a print deadline.

A brand new model in their GNSS rover line is the HiPer HR. This is not only a new rover platform for Topcon, but in several ways it represents a next logical step in GNSS rover development, one based on a lot of end-use experiences from surveying, mapping, and construction. 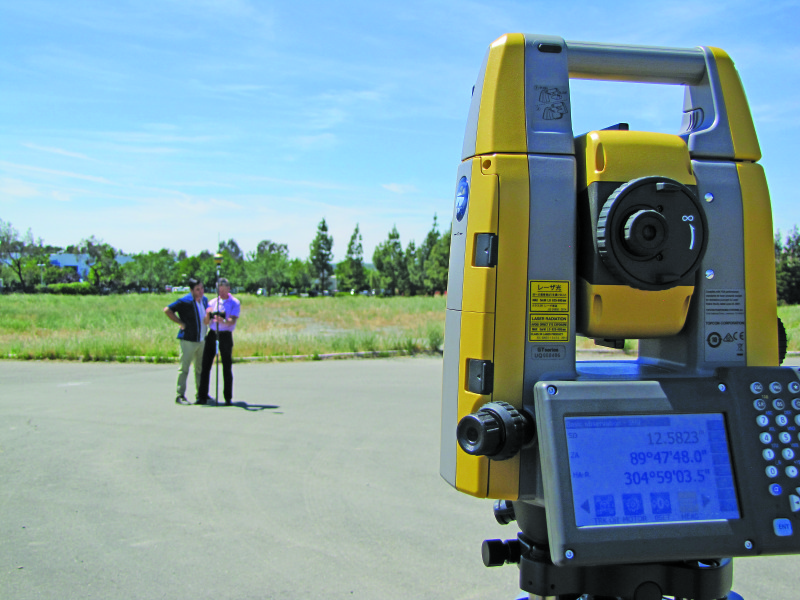 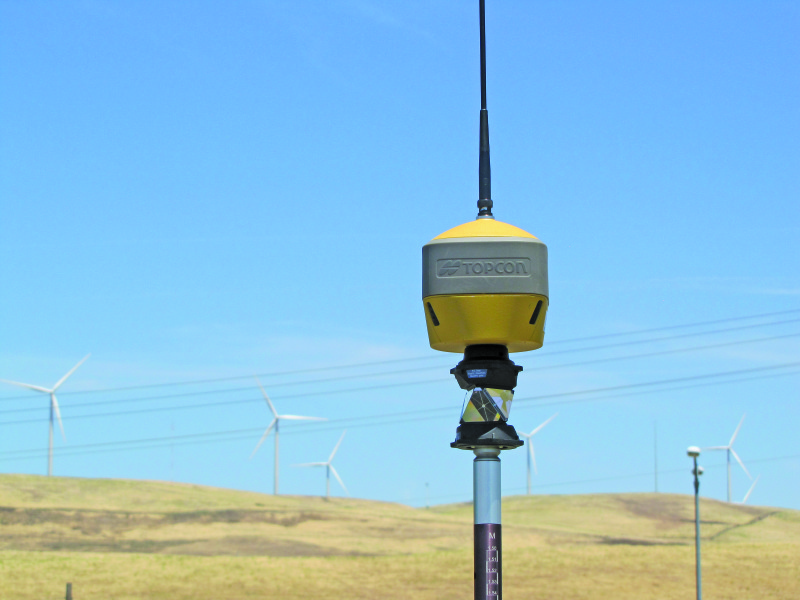 While we do not directly endorse specific products, the direction Topcon is taking in GNSS and the strategy of growing integrated systems is definitely noteworthy.

The HiPer line of rovers goes back generations of GNSS development; users have been pleased with the various models. The HiPer HR carries the name and features familiar to users, but in many ways the HR is a departure; some elements are cutting-edge and speak to Topcon’s strategy of gimmick-free development (and some tortoise-hare advances).

That Topcon also serves and develops hardware and software for machine control and precision agriculture has benefitted this new platform in subtle ways we’ll note below. Okay, details.

Folks are getting used to the idea of electronic bubbles, and some have been implemented around the industry, but many ride upon the limited capabilities of simple 3-axis MEMS (microelectromechanical systems). The HR has a 9-axis MEMS and an ultra-compact 3-axis e-compass. In Topcon’s development team this is referred to as Topcon’s Hybrid IMU, which indicates the HR stands for hybrid receiver.

Your smart phone has simpler MEMS; they’re used to rotate the screen, enable the phone as a full-motion game controller, help you to navigate virtual reality visualizations, and more. MEMS in the inertial category come in the form of gyros, accelerometers, and components of electronic compasses.

Topcon is not a stranger to inertial systems (or high-rate GNSS, for that matter). To design solutions that have to perform on moving machinery for long periods in harsh environments is no small feat. Topcon has MEMS all over its construction and agriculture gear, ranging from simple MEMS to full-on IMUs on some machine control systems.

Full tilt compensation up to 15¡ is in real-time, and you can set tolerances in the field controller software. There is also a filter to detect and reject outliers due to excessive or sudden movement. The horizontal component of the of tilt compensation is a function of a 3-axis MEMS compass; the calibration routine for the compass and 9-axis MEMS prior to each survey takes about 90 seconds. They call this integrated system “TILT” (Topcon integrated levelling technology).

Rovers of all kinds have morphed over several decades, from buckets, biscuits, mushrooms, boxes, and blobs; the HR is more like a ball, about the size of a softball. This “ball” is sleek and light; gone are the days of the clunky and chunky. It has a slightly smaller footprint than a HiPer SR–115mm x 115mm, but taller at 132mm–yet it still weighs only 1Kg (2.2lb), and they’ve packed a lot more into it.

This refinement of a new rover platform to move forward was informed by years of testing, feedback from users, and a desire to plan ahead for developments. After all of the various experiments with rover form factors (of all kinds), many users recognize the utility of the rover head as a versatile integrated component: less an end unto itself and more an essential part of a complete system. It can work standalone with a field controller, but it can also be put over a prism on the pole for integrated robotic surveying, put over a back-site, mounted on vehicles, even run up a tall rod in thick canopy (simple physics: “up high = more sky”).

The chassis is magnesium, passes a 2m drop test, and is rated at IP67 (dust and water resistance), and for some reason the working temperature range has increased from that of older models to -40¡ to +65¡C (if you’re working near a smelter, I presume). There are external power, serial, antenna, and USB ports. According to specs, it has an internal battery and a hot-swappable removable battery, enabling continuous operation. 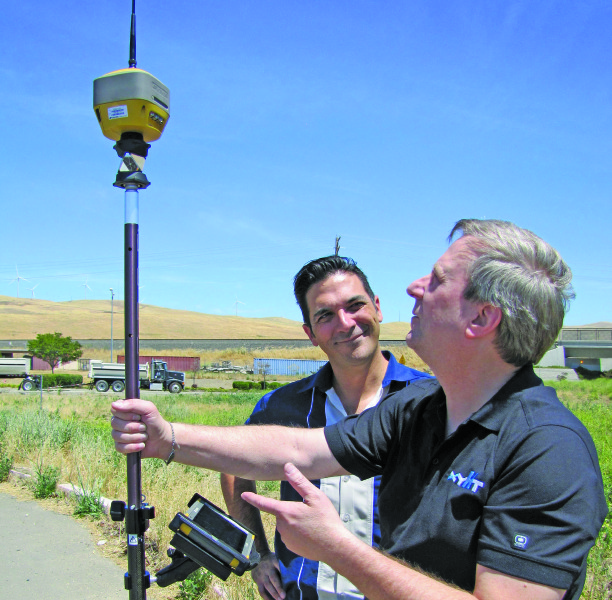 Each HR comes with a built-in cellular modem and a choice of UHF or spread spectrum radio: these are Topcon radios. In addition to Wi-Fi, the system comes with Bluetooth, but also a Bluetooth module for personal wireless network capability (BLE, Bluetooth Low Energy). BLE enables devices such as smartphones to recognize and connect without you having to wade through a bunch of settings.

You can set up a HiPer HR as a base and run up to three rovers from it via LongLink, or deliver corrections to 10 rovers via I.P. with Magnet Relay, or simply broadcast via the on-board radio. An enhanced multi-communications technology is being refined (under testing at press time and should be enabled via firmware update shortly after release) that will enable you to broadcast over radio and LongLink simultaneously, enabling communications to the entire HiPer family, including the HiPer SR.

The radio antenna sits up high on the top of the rover (a configuration that was proven by earlier models) with the omnidirectional Bluetooth antenna under that. This helps with range as the Bluetooth antennas on many rovers are tucked away down deep in the chasis.

At the heart of the HR is their next-gen Vanguard Technology board with 452 universal tracking channels. This currently accommodates GPS, Glonass, Beidou, Galileo, QZSS, and SBAS and can accommodate what may come. Atop this is a next-gen version of their Fence antenna upgraded to accommodate the additional constellations and signals. The receiver components share the same core as the NetGR5 reference station, and indeed the HR can make a great base. The unit can work at up to 100Hz update/output rates (typically the rover is operated at 10Hz).

GNSS development at Topcon has seen particular strides in the recent half-dozen years; both the core board and antenna teams have certainly hit their stride developing whole new product lines that noticeably outperform legacy systems. As Topcon develops not only for surveying but also for construction, agriculture, and a substantial OEM board market, this new platform benefits from many years of refinement. (I am a bit of a fan of some of the innovation their antenna team comes up with. Have you ever seen or tried the PN-A5 “hedgehog” reference station antenna?)

The HR’s “bigger bump” on top houses a double stack of full wave fence antenna (some rovers only have half-wave antennas). I was pleased to see how well the new antenna performed in some high-multipath environments, a particular sticking point of mine with some antennas new and old.

I asked Jason Hallett, a land surveyor who is now Topcon’s VP of product management, what the upgrade strategy is for this new rover platform. He noted that it is the same for all of their integrated gear.

“Think of a smart phone” said Hallett. “You start with powerful hardware, and you get notified of updates and new features that you can activate quickly and seamlessly.” He noted that there are unique electronic option files on-board that can be activated as your needs grow. Equipment can be managed via Magnet Enterprise, and a chip has been added that will soon be enabled for remote maintenance and theft protection along the lines of TShield (already in total stations).

There is a scene in the old 1980s comedy Gremlins where the protagonist’s inventor/salesman father is demonstrating his latest gadget–a personal grooming kit that looks like an oversized Swiss army knife–and the one-feature-too-many ends up erupting shaving cream all over the family. Outfits like Topcon have to serve customers large and small with a lot on the line: large construction projects, deadlines for harvest and planting, narrow margins for tightly bid jobs, etc. They seek to develop and test solutions that are fully matured before release.

The HR is operated fully from the field collector running MAGNET Field or Pocket 3D, and as Hallett points out, the rover will soon be connecting to Topcon’s mobile app (as do several of the total stations). This enables the bring-your-own-device concept, so that the HR can be controlled from nearly any mobile device or smart phone much in the same manner as apps like Topcon’s MAGNET Construct controls Topcon’s LN-100.

There is a simplified minimum interface (MINTER) as a series of status lights and a power button — simple — you can set it up to auto log static files for post processing. The prevailing trend is to keep the on-rover interfaces as simple as possible and utilize the rover head as a versatile tool in a fully integrated toolbox.

I’m going to detour into some free-form speculation. Further integration of IMU in GNSS rovers could enable further solutions like those developed for mobile mapping systems Ñnamely leveraging the inertial components to help carry or fill in positions in sky-challenged situations. Noting the focus on expandability and ease of updates when talking with the Topcon team about this new platform, I could envision a whole slew of potential new features and accessories (like different positioning, location, and data-capture sensors) in the works. The team was particularly tight- lipped when quizzed on this. Aha!

Without a fully controlled series of tests it would not be right to try to include hard performance numbers, but I can say that even with the limited hands-on time we did have, the HR fixes rapidly and appeared to repeat as solidly as any rover I’ve tried, as did the tilt compensation. This is definitely in a top-shelf class and should work well as an adaptable and updatable new platform on which to build future developments. Have a ball!