What is Pokémon Go?

In case you have been hidden in a cave for the last 25 years, Pokémon is a game that first appeared on the Nintendo Gameboy (circa 1995) in which players openly walk around the game world and capture mystical creatures (in a white and red ball), which they then train to fight (other creatures) in battle arenas called “gyms”. If their creature (called a Pokémon, but there are hundreds of breeds) wins their battle, then they earn a badge. The aim is to collect all the badges. Simple right?

Since the mid 90s there have been 18 manga books, 19 films and about 17 games …. yes, this thing is HUGE. Pokémon Go is the new generation, and it was inevitable that it would become a geocaching game.

“Geocaching /ˈdʒiːoʊˌkæʃɪŋ/ is an outdoor recreational activity, in which participants use a Global Positioning System (GPS) receiver or mobile device and other navigational techniques to hide and seek containers, called “geocaches” or “caches”, anywhere in the world.” – Wikipedia

Why is Pokémonn Go perfect for AR?

Let’s look at the concept of the game again. The user walks around the globe looking for Pokémon to capture and then train. If this isn’t the definition of geocaching then I will eat my shorts (thanks, Bart). Though any thoughts that this game was designed as a geocache promotion are quickly quelled when you realise that the first geocache was made around the millennium (by Dave Ulmer, Oregon).

For years we have struggled to get our children interested in mapping and geography, not realising that this was sitting under our noses the whole time! Ironically, it is all due to an Aprils Fools Day joke in 2014 in which it was claimed that Google had developed an augmented reality app. Niantic saw that this could be a reality and worked with Google; the rest is history.

How does it work?

After logging into the app for the first time, the player creates their avatar. The player can choose the avatar’s style, hair, skin and eye color and can choose from a limited number of outfits. Once the avatar is created, it is displayed at the player’s current location along with a map of the player’s immediate surroundings. Features on the map may include a number of landmarks where Pokémon may be and Pokémon gyms (places where you battle your Pokémon). 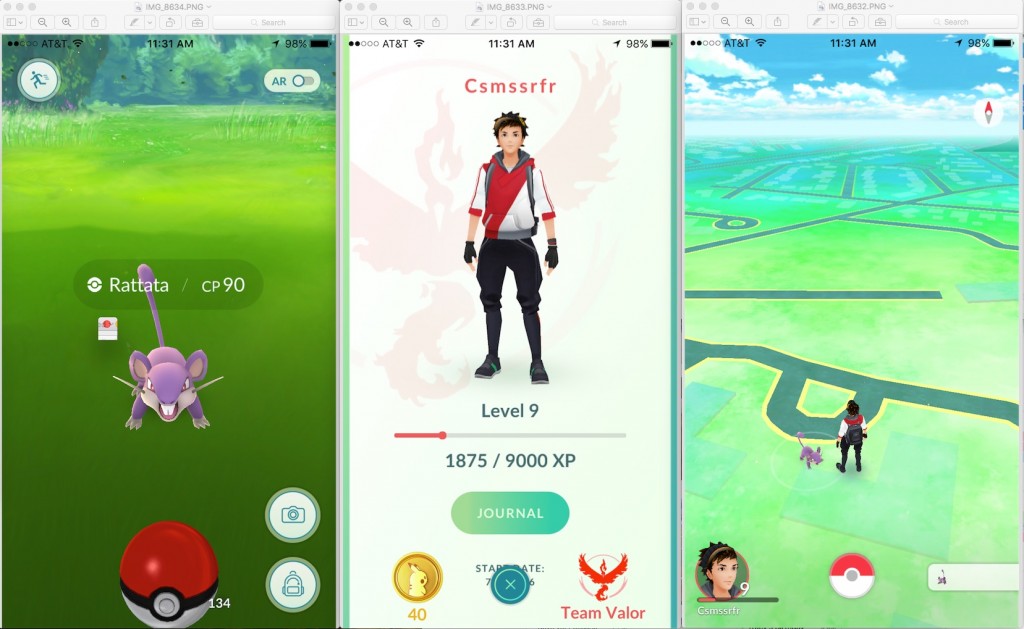 As players travel the real world, the avatar moves along the game’s map. Different Pokémon live in different areas of the world; for example, water-type Pokémon are generally found near water. When a player encounters a Pokémon, they may view it either in augmented reality mode or with a pre-rendered background. AR mode uses the camera and gyroscope on the player’s mobile device to display an image of a Pokémon as though it were in the real world. Players can also take pictures, using an in-game camera, of the Pokémon that they encounter both with and without the AR mode activated.

There is a fantastic article on how Google chose the locations for the Pokémon/geocaches here (by Mashable) whereby it explains how safety was the primary concern. Caches were chosen based on open places that had some significance so that players wouldn’t be chasing a Pikachu (a type of Pokémon) across a train track.

Why will it change geo things?

Already a wave of companies is looking at how they can use marketing to get a piece of the pie (see this & this). It is evident that people are aware that this is, excuse the pun, a game-changer. It really isn’t hard to see that this is going to be popular. So this might well be the turning point for geospatial, AR & VR. If people are comfortable using AR through this game then they will start expecting it for their mapping, bringing back apps like LAYAR with augmented real-world information.

The applications are immense and exciting for the geospatial industry. The ability to overlay real-world issues and information on what the user sees through the camera would be the definitive mapping system. Even if the accuracy isn’t that amazing (mobile GPS – think about it) there is the potential to use clever imagery and presentation to overcome most issues. Imagine sending the worst member of your team to site with an AR map with which you could be 90% sure that they would be able to find the correct building compared to using a 2D map, or think about how easy it could be to identify potential points of weakness or contamination around a site by just looking through your device, all set by someone sitting at a desk on the other side of the world.

Of course this is speculation, but consider the rise of VR which is now around us. Soon we will all be fully immersed, watching TV, playing games, and riding roller coasters. 3D GIS has seen a rise over the last few years, too, with many geospatial providers offering 3D add-ons or 3D alternatives. Furthermore, the conferences were rife with talk and demonstration of 3D and VR. Of course, all this innovation is led by CEOs and project managers who have seen their kids playing with some game and are asking that all-important question….

“Why can’t our company do that?”

You’d be a fool to think that this is all going to just disappear. The future of geospatial is now; we are seeing the evolution occur in front of our eyes. Just as the late Roger Tomlinson evolved the paper map to digital GIS in the 60s, we are seeing 2D moving to 3D real-world. I am all for it. It will bring new challenges, better accuracy, and more interaction with the user, although I draw the line at Pokemon Go myself.