Ken Jennings, the winningest champion in the history of the TV quiz show Jeopardy, is widely celebrated as one of America’s smartest people. He is a busy guy; he makes appearances worldwide on television and at events and has authored numerous books on trivia and knowledge, plus the bestseller Maphead: Charting the Wide, Weird World of Geography Wonks. 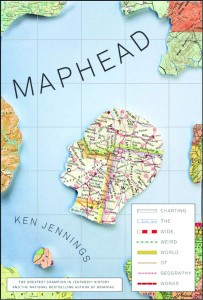 I was recently honored to sit with Ken at Seattle’s Wayward Coffeehouse (a noted geek haven) and ask a few questions about his real passion: maps and geography. We found out that this affable and soft-spoken guy truly does know a lot about maps and geography … and just about everything else. The full video interview is available online at xyHt.com.

Gavin Schrock: With geospatial data and maps now being so ubiquitous and instantaneous, do you think this has raised our geographical intelligence or diminished it?

Ken Jennings: It is funny that the received wisdom is just that “Americans are somehow worse at geography than they’ve ever been”; people have been writing these headlines since the 80s and in academic publications all through the 20th century. There are academics that are worried because their student did not know where the Appalachians are, people worrying that American school children aren’t learning geography. But the fact is that the world is shrinking so much today; you turn on the TV and you’re in Iraq, or Egypt, or Thailand, or wherever. People do have to know this stuff now, and I think they do—I think we are looking at maps more now than we have in decades.

Maybe our way of finding is going out the window as we do less dead reckoning. There is good evidence that in terms of our spatial sense we might actually be getting “dumber.” But in terms of looking at maps and knowing where places in the world are, we might be at some all-time peak. I use maps all the time now, like, “Hey the pizza guy is late—let’s see if I can look at the app and see where he is.” We use maps now to solve problems that were not mapping problems ten years ago.

People are even doing it for fun. I’ve noticed this new trend of people sending around maps as memes, like, “Here’s a fun map of the U.S. with every state’s favorite dessert.” Or, “Here’s a map of the world with everyone’s favorite sports information you might not have guessed, like, did you know that the Philippines is really into basketball?” Or, there are these amazing real-time weather maps, story maps, maps that get sent around as fun office jokes. I think this could be a kind of a golden age for certain types of geographic awareness.