In my last Dis-Located column I wrote about the historic, economic, and unusual impact of the Potomac River dividing Maryland and Virginia, saying no other state border impacted either side quite like it. While that is true, several readers pointed out that there are other oddities among state borders created by surveyors or surveying mistakes. So here’s one.

I don’t mean to pick on Mrs. Pipenbrink, my junior high school geography teacher, but I did leave her class with considerable misinformation about the geography of the United States. Take, for example, the afternoon she told us that California would, within a couple of decades, fall into the Pacific Ocean thanks to earthquakes and the San Andreas fault, forever changing the geography of our country.

It scared the crap out of a bunch of 12-year-olds, but she believed it to be true based on available information. I guess that’s not that different from teachers in the 1980s saying the world would be annihilated by nuclear weapons within the next couple of decades or teachers now with similar forecasts about climate change. California is still happily attached to the West Coast, and remains one of 49 states that have straight-line borders.

I mention that because straight-line borders is another topic about which Mrs. Pipenbrink misinformed her students. She was, indeed, correct that every state but Hawaii has at least one straight border, but her failings came in teaching us that the borders of three states–Wyoming, Colorado, and Utah–are entirely straight lines. Then, adding to that misinformation, she taught us that Wyoming and Colorado are the only two states that are perfectly rectangular. 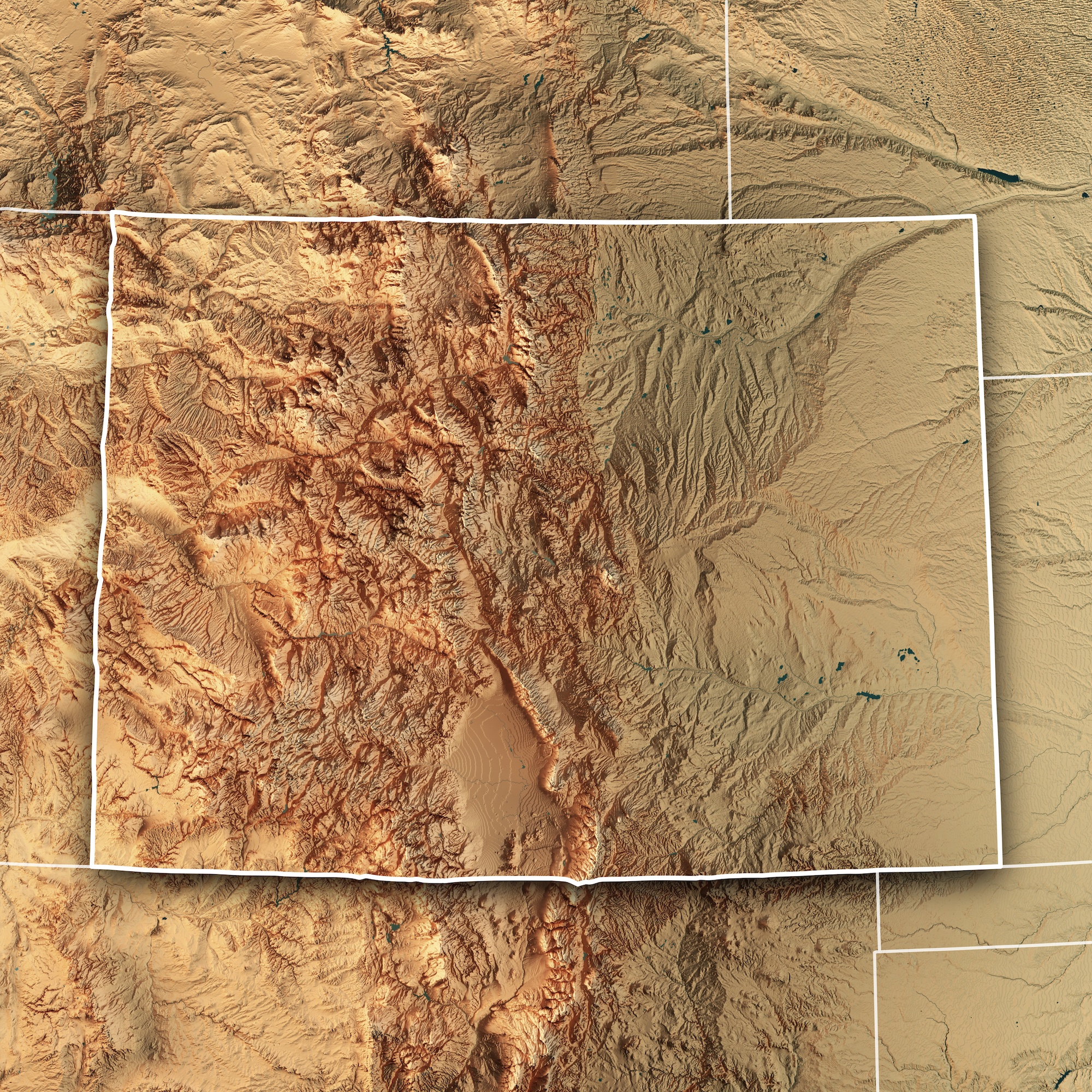 This map tries to show how not-straight the borders of Colorado are—especially the state’s western and southern borders—compared to the map above which depicts them all as straight lines.

Apparently none of my classmates’ parents were surveyors, because I don’t remember any kid coming to class the next day and challenging Mrs. Pipenbrink on any of these facts. Of course, back then parents didn’t pay as much attention to their kids’ schooling as they do now. And not to place all the blame on Mrs. Pipenbrink, I still see references to these geographic inaccuracies today.

In the geospatial professions we know these things to be false. Colorado is 22 miles wider on its southern border than on its northern border. In 1861, Congress defined the boundaries of the Territory of Colorado as stretching from 37°N to 41°N latitude. As lines of latitude converge at the poles, they get closer together as they move away from the equator, thus making Colorado not a perfect rectangle but a geospherical one.

But let’s not get too excited about Mrs. Pipenbrink’s mistake. Her reference was likely a map similar to the one hanging on my grandsons’ playroom wall, which shows straight lines and perfect rectangles because depicting a spherical world on a flat sheet of paper has always been tricky. The fact is she was also wrong about Colorado being contained within all straight lines.

From 1861 it took another 15 years before Colorado was admitted to the union and then another three for survey teams to actually translate Congress’ theoretical boundary delimitation to the reality of boundary demarcation. Without the aid of satellites, GPS, total stations, or any of the modern surveying conveniences, teams set out to perform the mountainous (literally) task of defining Colorado with magnetic compasses and Gunter’s chains.

So forgive them if they didn’t maintain those perfectly straight state borders through Colorado’s inhospitable terrain more fit for indigenous bison, big horn sheep, and mountain lions than humans. As was customary, surveyors left markers every mile to define the border, but in the vast emptiness of western Colorado the surveying team lost its way while working northward, perhaps pushed off course by a mountain ridge or maybe they stumbled upon rattlesnake infestations or heard the too-close growls of mountain lions.

For some reason the team veered 3,860 feet west off the assigned latitude line, before regaining its due north bearing. To Colorado’s south, New Mexico would, in Mrs. Pipenbrink’s world, have all straight borders if it weren’t for the 15-mile squiggliness north of El Paso where Texas takes a little point out of New Mexico. Ah, but even that’s not true because the Colorado-New Mexico border is not a straight line either.

After following the parallel east from Four Corners for 350 miles, 19th century surveyors apparently ran into the face of a mountain and veered sharply to the south for almost 3,000 feet before just as sharply cutting back to the east when the terrain got a little more hospitable.

Further on, perhaps after a night of imbibing on too much coffin varnish with local cowboys, the surveyors stumbled off their line just east of where Colorado, New Mexico, and Oklahoma all meet. For 53 miles the Colorado line staggers off the Congressionally deemed parallel until it turns north at the eastern edge of the state, giving Colorado a bit more land than Congress intended.

So that leaves Utah and Wyoming as the only state borders that are all straight line states, right? Uh, no. Turns out surveying in the wild, wild, west was tougher than sheriffing in Dodge City and similar errors were made along the borders of each of those states. So despite what Mrs. Pipenbrink taught her students for who knows how many years, there is nothing straight about any of the three “straight-line states.”

So why not just fix these problems with modern surveying utensils and techniques? Over the years, courts have held that the markers placed by the original surveyors are the true state boundaries whether they coincide with what Congress intended or not. Plus, the political red tape that would need to be navigated to do this would take time and money that no one wants to invest for a project that would easily straighten things out but would be meaningless in almost every other way.

In the vast emptiness of the west, it is doubtful that even a single person would be significantly impacted by moving the boundary stones. In the end, like so many of my junior high lessons, Mrs. Pipenbrink’s teachings—even as wrong as they were—had absolutely no bearing on the rest of my life.