How the Schonstedt Humanitarian Demining Initiative works—and how you can help.

You know the magnetic locator well, no doubt. Whether yours is a Schonstedt or another brand, geospatial professionals are familiar with these instruments due to their common use in detecting survey markers. Border-marking studs, often sunk by surveyors gone by, are made of the ferrous metals that the magnetic locators are designed to detect.

However, before the 1970s, Schonstedt wasn’t focused on these meat-and-potatoes surveyors’ needs. The company was a space-specialist, hard at work creating instruments for aerospace use. As a developer of magnetic field detectors, they were often in partnership with NASA—a big zoom out from looking for infrastructure hidden underfoot.

Their website says, “Our founder, Erick O. Schonstedt, designed his first instruments for use in the aerospace industry, outfitting over 400 satellites with magnetometers, along with the Hubble telescope.”

His technology was used in satellites for orientation, to measure the magnetic fields for other sciences, and to gauge altitude.

Under the Hood of Schonstedt’s Magnetic Locator

Because buried metal disrupts the direction of the Earth’s magnetic fields, a magnetometer will detect ferrous metals to impressive depths even through the earth. Thus, Schonstedt pushed forward with the development of an earth-bound, hand-held magnetometer that would make underground investigation acceptably ergonomic—and the GA-52 magnetic locator was born.

It was a wild success for the company—“the instrument of choice for surveyors in the 1970s”—and has defined Schonstedt’s direction ever since. (While they no longer manufacture sensors for satellites, their Heliflux magnetic sensor technology is currently on several active satellites and “is unsurpassed for its environmental stability and ability to detect ferrous objects to extreme depths.”)

The GA-52Cx is Schonstedt’s basic model. The GA-72Cd has an LCD meter display reflecting the relative signal strength and polarity of the magnetic field detected; the GA-92XT is a portable, retractable version of the latter, providing one-handed operation and an easily removable battery.

As Schonstedt put it, “The GA-52Cx locator detects the magnetic field of iron and steel objects, with unmatched sensitivity.” Because their detection is of ferrous metals—no cry raised for gold, aluminum, brass, or copper, none for plastic, and so forth—these magnetic locators are great for detecting benign objects such as waste metals and potentially contested ones such as border markers.

They’re also exactly what’s needed to detect the metallic construction of unexploded ordnance (UXO) and explosive remnants of war (ERW). This makes them useful in just about every country in the world—whether or not that country has recently seen war on their soil.

Sales of Schonstedt locators in the U.S. are often to the U.S. military or Department of Defense contractors for the insurance of safety on their training fields and weapons-testing grounds, as well as for use overseas in areas that may be primed against perceived threats.

In the United Kingdom, for example, it’s not uncommon for unexploded World War II mines to still be underground or close to the surface, and each one may or may not be alone. In countries that have seen more recent combat, invasion, or civil war, the UXO and ERW count is much higher, and because of that, there’s a greater demand for locators.

For example, in 2018, the UN’s demining outfit, United Nations Mine Action Service (UNMAS) managed 18 mine action programs on three continents, clearing large swaths of highly contaminated land and thousands of miles of roads, and they destroyed more than 105,000 ERW and thousands of landmines and IEDs.

Due to Schonstedt’s locator’s ease of use, it’s a tool that’s suitable for international deployment. There are only a few switches, and you can quickly learn to use the instrument. Being designed for one-hand use (a boon for the busy surveyor, who may have to make notes or consult them), it’s also ideal for the nerve-wracking job of demining. Light, no problem to wield. Practical.

Generally, demining initiatives are led by teams of local specialists who survey the land areas that are likely to contain leftover ordnance supply or have been planted with bombs that haven’t been cleared. Their area role is dual: both geospatial task force and bomb squad.

Unfortunately it’s not always possible for countries with UXO or ERW to afford the equipment that their people need to perform in this specialist profession. It’s common for these teams to work with UNMAS—they have a partnership with the Tajikistan Mine Action Center, for example—and it’s through the UN that Schonstedt is able to lend their expertise to the problem, as they do for geospatial professionals every day.

The Schonstedt Humanitarian Demining Initiative is a program that puts Schonstedt magnetic locators in the hands of demining teams in countries that otherwise struggle to afford them.

It also guarantees that Schonstedt will match any GA-72Cd magnetic locator donated to the UNMAS initiative through Schonstedt. Say, your company allots funds for the purchase of one item for the UN to deliver to a specialist team in an underfunded area. Your company buys that from Schonstedt—$1,041 outgoing—and Schonstedt sends two locators to these UXO surveyors, selected and verified by the United Nations. 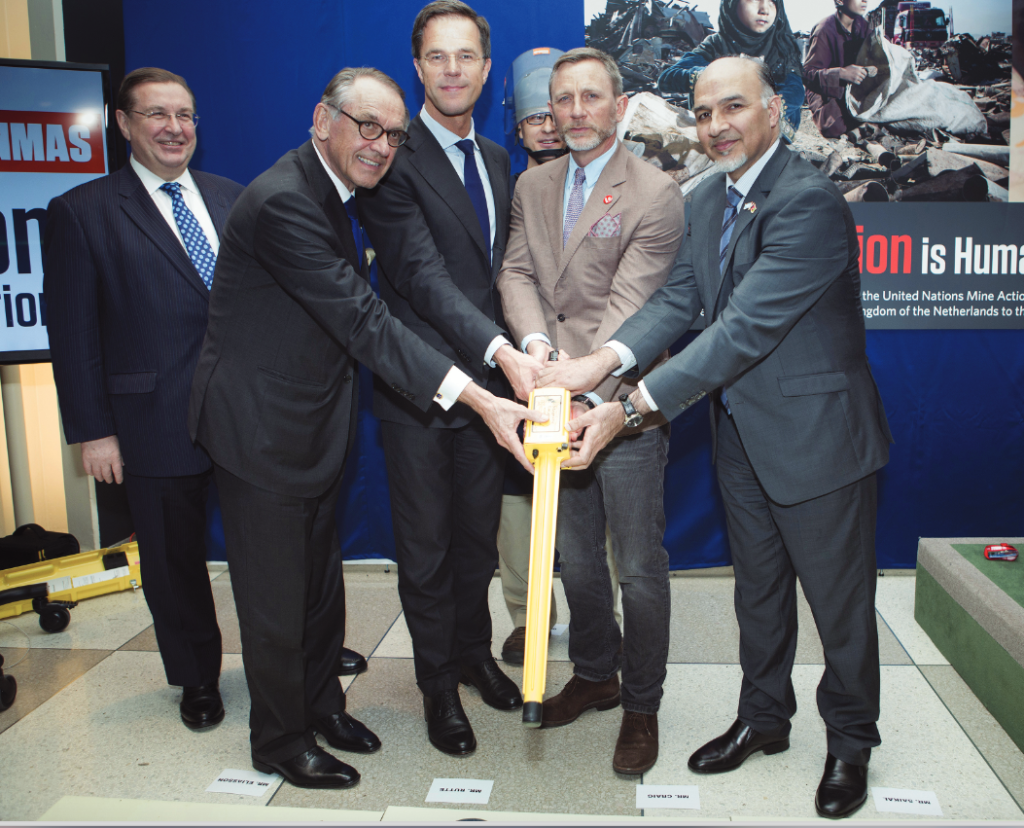 Daniel Craig, U.N. global advocate for the elimination of mines and explosive hazards, demonstrates the use of the Schonstedt magnetic locator. Credit U.N.Photo/Manuel Elias.

Wendy Hart at Schonstedt has also worked in tool-to-team coordination with the U.S. Department of State, Bureau of Political-Military Affairs, Office of Weapons Removal and Abatement (PM/WRA). The receiving country’s demining team covers the cost of shipping and handling.

To their surprise, customers who did not need pipe and cable locators, like surveyor Frank Lenik from New Jersey, approached Schonstedt and wanted to donate locators without purchasing a pipe and cable locator. From there, the matching donation program was born, helping donors who care about this issue to make a greater impact. Buy one of these locators, and the company will match your purchase with a donation of the same detector to be used for locating and detecting UXO by UNMAS-vetted demining teams.

Lenik happened to be involved with a local pacifist community, his Quaker church group in Woodstown, New Jersey. They found that the initiative appealed to their values and asked if they could buy magnetic locators for donation, rather than for their own personal or business use, and have that purchase matched.

From this beginning, Schonstedt developed their current program, and the Woodstown Quaker group set about funding around 30 of Schonstedt’s matched donations. Their efforts lead to notable coverage in print, digital, and video journalism. Lenik’s involvement in the surveying industry and its surrounding community also allowed word to spread; for some time, the majority of the contributions to this program were from Lenik’s area, New Jersey, and West Virginia, where Schonstedt is headquartered.

According to the journal, Landmine Cluster and Munition Monitor, in 2016 at least 8,605 people were killed or injured by landmines, and that includes improvised landmines, unexploded cluster submunitions, and other explosive remnants of war.

It’s clear why the demining initiative appeals on moral or religious grounds, but its value goes further. UXO and ERW are an active strain on the world economy and prevent the expansion of business and industry; land that can’t be marked as safe also can’t be farmed, for example. Agriculture is impossible among UXO or ERW as workers can’t access the fields, and animal stock will be depleted once let loose on unsafe ground.

Active bombs in pedestrian areas or the public way, and even on private land, injure people who then have pressing health needs, including medicine, doctors, hospitals, and prosthetics and ongoing aftercare. These are especially expensive for underserved countries with UXO and ERW and a contributing factor to why they can’t contribute to international marketplaces.

Furthermore, it’s unsafe for existing businesses to expand into countries with undetonated mines, and for work to be delegated or outsourced there because factories and manufacturing plants cannot be built on mined ground.

Refugees cannot be given space to live within the borders of their own countries because there is not enough mine-free land, and as such can be forced to move elsewhere. There is also generational damage to be considered; the loss of children, who are drawn to toy-like items such as partially visible cluster bombs, is hard to recover from.

All this can be combated with the same equipment you use all the time. Next time you’re out in the field with your locator, consider the tremendous potential you’re holding in your hand. It lets you do your job … and it saves lives, every day.

How to Get Involved

If you or your business is looking for a way to make charitable giving a priority in 2020, what better way than through a geospatial program? Even if you’re not thinking about tax deductions and are looking for a way for your local surveyors’ community, Facebook subgroup, or rotary club to come together for team building, consider creating a fundraising challenge that backs the Schonstedt Humanitarian Demining Initiative.

Who can buy units, with purchase to be matched by Schonstedt? Businesses, individuals, and nonprofit organizations, such as church and school groups, trade associations, and service clubs.

If purchasing one whole magnetic locator is beyond your budget, any interested party can also contribute to an aggregate fund that’s on Schonstedt’s website. Once the balance of that fund meets the $1,040 unit cost, that is matched, and any leftover donations go to meeting the next total.

In October, 2019, four magnetic locators from Schonstedt were sent to Somalia for use by a local demining team locating ERW. They’ll be working on ground approximately six miles north of the nation’s capital, Mogadishu. The press release from Schonstedt reads:

“The Daynile district, located in the Banaadir region of Somalia, encompasses the northern outskirts of the nation’s capital, Mogadishu. Approximately six miles north of the central part of Mogadishu also lies a former ammunition storage site.

“At the site, most ammunition bunkers were destroyed, and some of them collapsed inward, leaving approximately 98 acres of land contaminated with explosive hazards.”

Located near an airstrip, the site may also become a relocation site for Internally Displaced Persons. 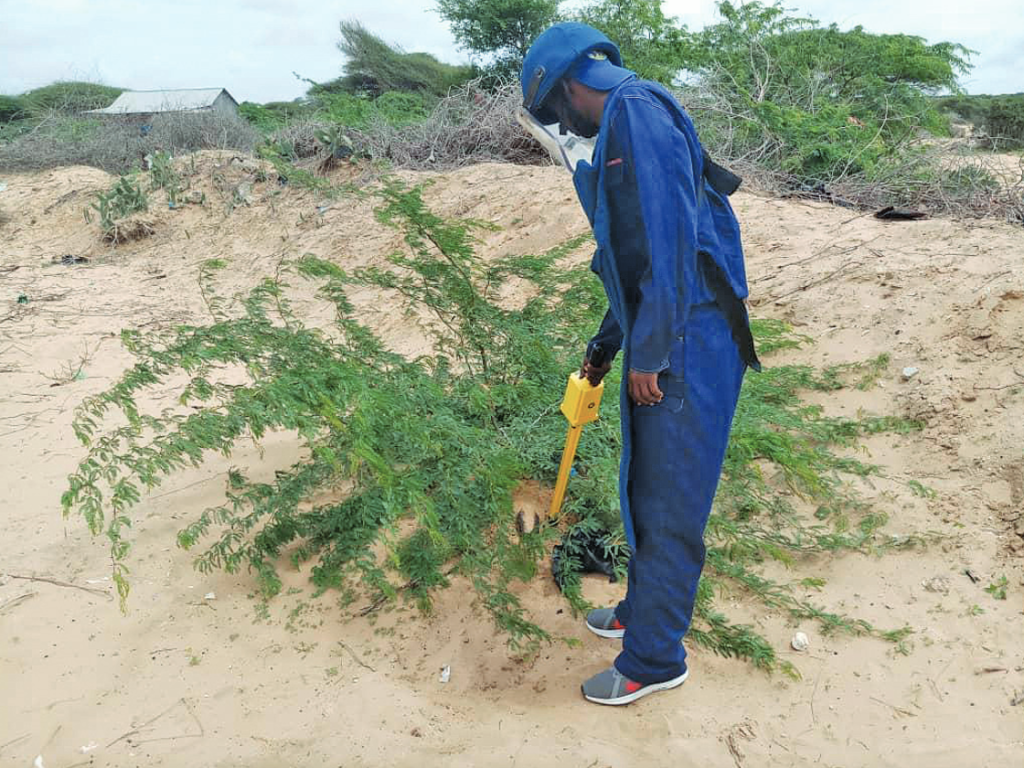