This column provides monthly coverage of a national initiative: Forum on the Future of Surveying (FFOS). See the first installment in our March issue.

The National Society of Professional Surveyors released a short, online questionnaire in April to gather feedback in advance of the second meeting of the national FFOS (scheduled for this month). They wrote the questions based on a report developed during the first meeting.

As this issue goes to print, there are just under 700 responses. These results are by no means a scientific study or statistical sampling, but, in an effort to test the waters among licensed surveyors on these matters, circulation of a questionnaire via NSPS membership is a great start.

The results are interesting but mostly unsurprising. What they reveal is willingness to engage in a national dialogue. And, almost without exception, those who responded in the free-form comments sections did so thoughtfully and constructively.

The questionnaire will be kept open until the beginning of this month in time to compile a report for the second meeting. NSPS may publish all of the results (of course, without identifying individual respondents).

A few questions were asked to help characterize the makeup of the pool of respondents: by geography, age, and affiliation/participation in surveying professional associations.

The age spread is not as top-heavy as unrelated studies of licensees have shown. Perhaps there is heightened interest in such an initiative among the younger folks in the profession? It is their future, and the comments from the younger respondents seemed to value a positive and broadly defined view of the profession. 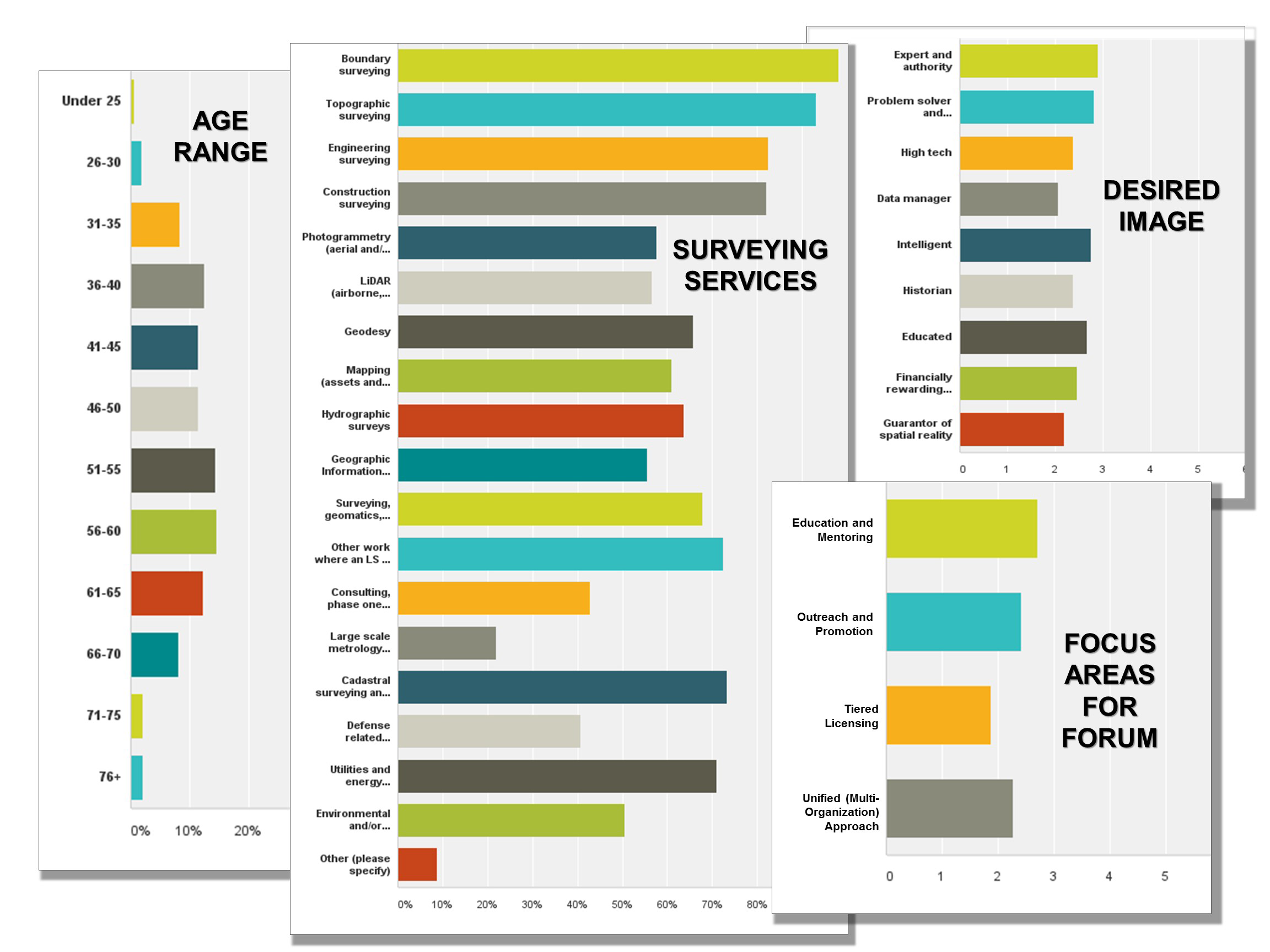 There is a lot of data to analyse—numerous graphs are in the online version of this article on xyHt’s website. NSPS and other participating forum societies/associations will have a wealth of raw data to analyse and report to their respective memberships.

A few key themes jump out, and they are the same hot topics at the first forum meeting. Succession planning (64%), outreach (65%), and image/branding (55%) ranked highly in the responses. The challenge of providing mentoring is front and center, as well as adapting to an era of smaller crews and contractions in certain markets for surveying services that had seen booms or perhaps bubbles in the last century.

Several areas were ranked high for forum focus: identifying what services the profession provides (as respondents identified: these extend well beyond those definitions related to licensing). 68% indicated a desire for the profession to be more inclusive as to what constitutes surveying to show value to the public.

Even though this is the first of possibly many questionnaires that may come from the forum, the responses so far are great examples of the type of positive dialogue such a forum can foster.

On another note, thank you to those who identified spelling errors in the beta version—gotta love surveyors’ attention to detail!