Editor’s note: Our April feature “Datum Epochs, and How to Understand Them” by Richard Maher, generated a lot of interest, and readers asking for more on geodesy fundamentals. One letter to the editor provided more detail on keys points. In the interests of providing multiple perspectives, we present the following from Steven J. Martin as supplement to the April feature.

The recent article “Datum Epochs,” by Richard C. Maher, PLS, contains a lot of California specific information, but the goal of informing Surveyors on the importance of noting datum epoch information is timely in light of NGS’s plans to move to a semi-dynamic datum countrywide in 2022 including plate rotation and intra-frame velocity models1.

I would like to add some clarity to the discussion by explaining the difference between datum tags and epoch dates while also correcting one item.

The article states that “Ostensibly, the epoch of the original NAD83 is 1986”. 1986 is actually the datum tag for the original NAD83 adjustment and represents the year in which NAD83 was first published. The accepted notation is NAD83 (1986). A datum tag is a unique identifier and is noted generally, but not always, by the year in which a particular version, or realization, of NAD83 was published.

A datum epoch is the date in decimal year format for which the positional coordinates correspond. The epoch date to which historical measurements in California were corrected up to for the original NAD83 adjustment is December 31st, 19832. To be consistent with subsequent convention this can be expressed as5 Epoch 1984.00.

A complete expression of the datum for the original NAD83 realization would be NAD83 (1986) epoch 1984.003. December 31st, 1983 would be the date to use when transforming coordinates published on NAD83 (1986) epoch 1984.00 to another date using the NGS software HTDP (Horizontal Time Dependent Positioning), or the latest NGS transformation software NCAT (NGS Coordinate Conversion and Transformation Tool).

Of course, when NAD83 was first published in 1986, this full notation was not used. NAD83 was only referred to as NAD83. It was not until subsequent realizations of NAD83 came out that there was a need to be specific about which version of NAD83 you were referring to.

How Many Realizations of NAD83 Have There Been?

Seven by my count. I’ll brush upon each of them.

The second realization of NAD83 was the HARN (High Accuracy Reference Network) statewide surveys of the early 1990’s. I too am a California Surveyor and in 1990-91 when NGS came to California to advise on the survey, the acronym in favor at that time was HPGN (High Precision Geodetic Network). When the California HPGN was published in 1992 many of us surveyors wondered why we needed two terms, the datum tag (1992) and the epoch date, 1991.35, to refer to the same published coordinates, so we generally ignored the datum tag and called it NAD83 (1991.35). 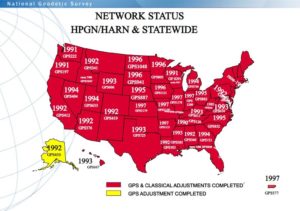 But there is some method to the geodesist’s madness. There can be several adjustments to a full datum realization. For example, after the Landers earthquake in California in June of 1992, a portion of the HPGN network was re-observed in November of 1992, adjusted to stations outside of the displacement zone, and published as NAD83 (1992) epoch 1992.88. The datum tag of the HPGN survey (1992) was retained because the survey was not a new realization of NAD83, only a readjustment of a subset of the HPGN stations and constrained to published NAD83 (1992) epoch 1991.35 stations outside of the displacement zone.

Collectively, I count the statewide HARN surveys as one realization of NAD83 even though they were all realized separately. As an example, the California HPGN was realized by including 22 Very Long Baseline Interferometry (VLBI) stations in the survey, many of which were also included in the VLBI solution which was given full weight in the original NAD83 adjustment, then deriving a seven parameter transformation (three rotations, three translations and a scale change) based upon the published coordinates in both NAD83 and the VLBI solution, and finally applying only the three translations and three rotations, maintaining the higher accuracy scale of the VLBI solution6.

“By using the six parameter transformation what we have done is to retain the coordinate system origin and orientation of the original NAD83. However, we have changed the scale to be compatible with the VLBI scale. Note the impact of this scale change is only to change a station’s radius vector and not its latitude and longitude. One way to look at this is to say we have introduced a constant change in geoid height at all stations.” 6 – William E. Strange, geodesist (Ret.), National Geodetic Survey 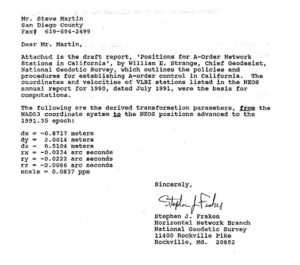 Once all the state HARN surveys were completed, NGS found discontinuities from one state to the next of up to 7cm, so planning began on the next full realization of NAD83. As a part of that plan, portions of the state HARN networks were re-observed and tied into the growing number of GPS CORS (Continuously Operating Reference Stations). In California, this re-observation happened in June of 1998. Perhaps these HARN/HPGN unification surveys could be considered a separate realization of NAD83, however I have not counted it herein because only a small number of stations re-observed were published on this adjustment. In California, there were about 200 stations in the re-survey published at epoch 1998.50.

The next full NAD83 datum realization was published in 2007. It was given the datum tag of (NSRS) for National Spatial Reference System, and fully described as NAD83 (NSRS) Epoch 2007.00. In California, NGS worked with the California Spatial Reference Center (CSRC) at the University of California San Diego – Scripps Institution of Oceanography for the California portion of the network. CSRC published coordinates on NAD83 (NSRS) at epoch 2007.00, epoch 2009.00, and again at epoch 2011.00.

The seventh and final realization of NAD83 was also published by NGS in 2011 and, reverting to a year of publishing naming convention, given the datum tag of (2011). The epoch date for these coordinates is 2010.00 for a full name of NAD83 (2011) Epoch 2010.00. This realization made use of a Multi-Year CORS Solution (MYCS) that involved reprocessing CORS data back to 1994 using absolute antenna models, improved station velocities and software, all based upon the IGS08 reference frame. CSRC subsequently published an adjustment in California of NAD83 (2011) at epoch 2017.50. 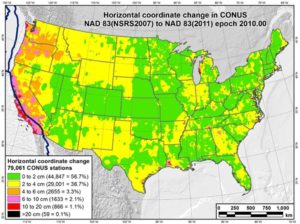 It is important to note that for each realization of NAD83, the datum origin, X, Y, & Z axis, and ellipsoid remain the same, however the scale changes slightly. The biggest of these scale changes was from NAD83 (1986) to NAD83 (HARN) of -0.0871ppm which decreased ellipsoid heights by about 0.6m. So, ellipsoid heights will vary slightly from realization to realization. Geoid models since 1996 have been hybrid models, that is: they are corrected to work with a particular realization of NAD83. For example: GEOID12B and now GEOID18 both work with NAD83 (2011); However, if you are working on NAD83 (NSRS), GEOID09 is the hybrid model designed to work with the 2007 realization.

NAD83 is a North American tectonic plate fixed datum. In California, where the Pacific plate rides up against the North American plate across the San Andreas fault zone, being specific about which datum realization you are using and specifying the epoch date to which coordinates correspond has been especially important in relating one survey to the next. With the coming of the time dependent North American Terrestrial Reference System (NATRF) in 2022, the need to document datum realizations and epoch dates will be even greater.