Let’s rethink how we license the land surveyor.

I had the benefit of starting my surveying career at a very early age. It began when my father, a licensed land surveyor, needed cheap labor. Being his son, I was readily available whenever and wherever the need arose.

Over time, as my experience grew, my responsibilities grew. As most trainees in this business at the time, I worked my way up the ladder from basic helper to party chief. My story is very similar to stories of those who have grown up in this business. 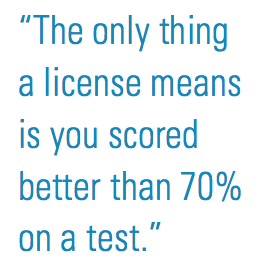 After high school, though, I was at a crossroads. I had the experience to find a job just about anywhere I wanted and the skills to make a good living. My father, though, began to tell me that the future lay in education. As a government employee, he had hit a glass ceiling because he did not have a degree. He recognized that I would soon hit the same glass ceiling if I did not seek a degree.

Being a young man, I did not agree. It was not until the economy went south in the early 1990s that I finally decided to go to college. In 1995, I graduated with a bachelor’s degree in surveying from New Mexico State University. With my previous experience and my new degree, I had no problem obtaining licensure. Like most, I collected many states and displayed the licenses on my wall with great pride and accomplishment.

With this pride and accomplishment, I struck out and worked for many great companies and got to know many terrific surveyors. One surveyor who stands out above most was a gentleman in Colorado who pulled me aside and told me,

“The only thing a license means is you scored better than 70% on a test.”

I was crushed because I didn’t understand what he was trying to tell me until much later.

But boy,. did I learn. At first I had been licensed, but I had not signed or sealed anything. It wasn’t until I sealed my first plat that I shuttered. Was I really ready for all the responsibility and liability? I thought I was, until I had actually done it.

To be honest, the first time scared me. As I look back on that now, I sort of wish I had that same fear, but not for the same reason; I will get to that later.

Many jurisdictions test for minimum competency when issuing a license to practice land surveying. The premise is “learn as you go.” Is this really a smart business model? Is this contributing to the negative opinion the public holds? I think so.

Here is my rationale. When people purchase land, they are obligating themselves and their fortunes to something that, for some, is a lifelong investment. Is this something we can take such a cavalier attitude about? Yet many do it.

Step one: work for a period of time and get some education (in some jurisdictions) and apply for “in-training” status. Usually the application is accompanied with references where registrants will attest to the applicant’s experience and background, plus transcripts if applicable, then a test.

Step two: a period of time working as a trainee.

Step three: applying for licensure; the application, references, the test, and the anxious anticipation of waiting for the results.

Finally, if successful, a license. Now, presumably a panel or board reviewed the application and references and decided if the applicant was ready to sit for the exam. That process is where I think the largest hole lies.

What happens when an applicant receives references that embellish a little or inflate the ability of the applicant in order to get the applicant accepted? However well intentioned, what are the consequences? Does this ever happen? Do any of us, personally, know another registrant and quietly wonder to ourselves, “How did they ever get approved to take the test?”

So now this person is out there practicing. Then it happens, the inevitable board complaint. As the case is reviewed and deliberated and the deficiencies pointed out, the registrant is reprimanded, and the rest of us look around thinking it should not have happened in the first place.

Here is my answer. I believe we can drastically change things with a simple adjustment to the application process. After an applicant achieves in-training status and meets the statutory requirements for applying for licensure, have them gather the references that are required, as usual.

Then, assuming that the applicant is approved to take the test(s) and successfully completes them, instead of granting full licensure, grant a provisional license for five years.

During that five-year period, each reference on a rotation will act as a peer reviewer signing off (on a board of licensure-provided form) the boundary survey. These sign-off sheets will be affidavits by the reviewer that the probationary registrant met the statutory requirements of the minimum standards and/or standards of practice, and the survey is satisfactory.

Then, if there is an incident where the board of licensure has to investigate a violation, they call in the probationary registrant and the reviewer as the respondents in the complaint. By making the references have “skin in the game,” they will carefully contemplate how they describe the applicant’s experience and probably give a more honest evaluation.

The other benefit to this system is that the probationary registrant will learn how to properly prepare a boundary survey because there will be someone looking at the work and evaluating it who will also have some stake in it, as far as the board of licensure is concerned.

Peer review is used as a disciplinary tool today, but what if we used it as an educational tool? What if the more experienced amongst us lent their expertise to those starting out by voluntarily peer-reviewing boundary surveys before they were recorded? Or before they showed up as a board complaint?

Many other professions successfully use peer review as a preemptive means of promoting good practices instead of as a punitive means of correcting bad behavior. It’s a simple adjustment that could have a significant impact on how we practice and how the public perceives us.