Above: Croton Lake Gatehouse at the Old Croton Reservoir in Westchester County is the oldest part of the city’s current water system.  At the reservoir’s construction in 1842, it had the capacity of delivering about 90 million gallons of water per day to the city.

Where does the water you drink come from? For more than nine million people in and around New York City, the answer is from the largest unfiltered water supply in the United States.

To ensure its ability to provide potable water for its residents long into the future, the city acquires and protects land throughout nearby watersheds. This allows it to provide drinkable water, keep water supply-costs down, and protect the environment—but doing so requires extensive services from surveying and other professional services firms.

The first reservoir in New York City was constructed in 1776 when the population was about 22,000. Using shallow wells, the city opened the reservoir for use on the east side of Broadway between Pearl and White streets. In the following five decades or so, the city built another reservoir, along with wells and pipes to deliver the water. Residents also used water from natural springs in upper Manhattan. 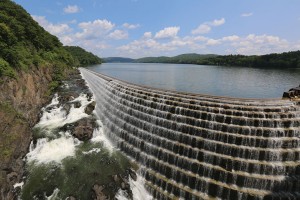 The Cannonsville Dam in Delaware County is the westernmost of New York City’s reservoirs and the most recently constructed, in 1964. Credit: New York City Department of Environmental Protection.

In 1842 as the city continued to grow, the oldest part of its current water system was brought into operation, known as the Croton Reservoir (now the Old Croton Reservoir). Along with an aqueduct, this had the capacity to deliver about 90 million gallons of water per day to the city. For the next 50 years, New York City would stretch its water supply to the limit as the metropolis continued to increase in size, particularly as the Industrial Revolution took hold in the late-19th century.

In 1905, the New York State Legislature passed a law allowing New York City agencies to acquire lands for the building of dams, reservoirs, and aqueducts in the Catskills. The Ashokan Reservoir, constructed between 1907 and 1915, was the first fruit of that decree. Its aqueduct runs mainly underground through deep rock tunnels, steel pipe siphons, and buried conduits, passing more than 1,000 feet beneath the Hudson River.

New York City acquired rights to large chunks of property, flooding areas to create the reservoirs, which displaced hundreds of residents and sometimes entire towns. The city continued to build reservoirs and dams through the first half of the 20th century, finishing its last reservoir in 1967.

In the 1980s and 90s, extensive conversations took place to find a solution for a still-growing population and the possible future need for filtered water, which had never existed for the city. To avoid the exorbitant expense following federal direction to install a water treatment plant providing filtration—estimated at up to $10 billion to build and $100 million per year to operate—the city and its partners instead planned to acquire more land and develop a host of other methods to address surface water protection in the mostly privately owned watershed. 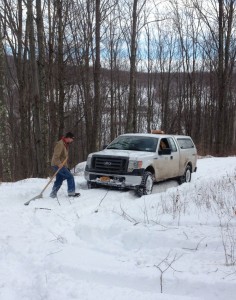 RETTEW surveyor John Vogt shovels snow in Delaware County so he can measure the boundary of land acquired to protect the watershed.

Rather than being a place on which to build facilities, however, the acquired land serves to protect the existing water supply. Owning additional land around the city’s water supply system would ensure all water could maintain its necessary level of quality without treatment. Protecting the most sensitive properties can eliminate or shift the location of impervious surfaces that occurs as land is developed, including underground septic systems and disturbances that could harm the water supply from polluted stormwater runoff.

In 1997, New York City owned about 34,000 acres of land surrounding its 27,000 acres of reservoirs in its Catskill-Delaware watersheds. That same year, the New York City Watershed Memorandum of Agreement went into effect, with participants including the New York City Department of Environmental Protection (NYCDEP), 60 upstate communities, the U.S. Environmental Protection Agency, and other organizations and agencies. The agreement put in place safeguards and a strategic plan to continue to supply much of the city’s and surrounding region’s tap water from the New York City Watershed without treatment by continuing to acquire land.

Once protected, the land can continue to be used for forestry, agricultural endeavors, and even recreation such as hiking, hunting, and fishing. In fact, much of the land originally used more than a century ago for reservoirs within the city was repurposed into parks and pools. 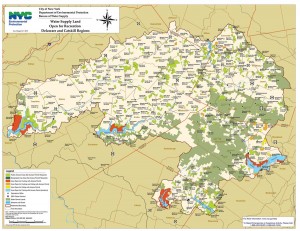 The watershed currently includes 19 reservoirs within hundreds of thousands of acres and close to 300 miles of aqueducts. The water comes from rainfall and melting snow in the Catskills region to the north of the city.

Total capacity of the system is about 580 billion gallons of water, with about 95% of it available to consumers by gravity. This keeps operating costs relatively unaffected by the price of electricity. Since 1842, there have been no significant interruptions of service other than brief annual shutdowns for inspections during the Civil War.

To implement the strategy, the NYCDEP was permitted to acquire more land and began researching parcels available to purchase. Stipulations included:

The NYCDEP selected several survey firms to perform boundary surveys for the agency, including RETTEW, a surveying and engineering firm in the Catskills. The firm was first contracted in 1997, and the contract has been renewed ever since. Since the late 1990s, acquired land parcels have been as small as one acre and as large as 1,500 acres. To date, RETTEW has surveyed nearly 65,000 acres for the NYCDEP.

The city has developed strict methodology in conjunction with RETTEW for boundary surveys. As the NYCDEP is in the process of purchasing land, RETTEW’s surveying team begins by researching deeds of the property. Visiting the local courthouse, they find records dating as far back as 100 years. Then, surveyors visit the site and conduct reconnaissance and field traversing to measure the exact boundary of each section.

However, the work is not always so simple. If a corner of a property line isn’t outlined on the deed, surveyors sometimes have to keep measuring to identify a proof line. Much of the area is mountainous, requiring trekking up the side of a high peak and then safely making a way down the other side. Surveyors wear extensive safety gear for protection, matching their personal protective equipment to the terrain and climate conditions.

Throughout a large part of the year the Catskill Mountains are covered in several inches or feet of snow. Consequently, each surveyor is issued snowshoes to traverse the terrain and often have to dig through piles of snow to identify the boundary lines they are surveying.

The sometimes-extreme conditions have led to a bevy of interesting experiences over the years. Coyotes and bears are regularly sighted in the field. It can sometimes be 30 degrees below zero, with winds reaching 40 miles per hour in the harsh winter weather. And once, a survey crew member was chased up a tree by a momma bear. She let him down about an hour later.

Following the field reconnaissance, surveyors detail their findings in AutoCAD. They map everything within 150 feet on each side of the boundary line, including stone walls, fences, buildings, streams, and lawn areas. Following the complex mapping, surveyors go back to the field to brush and blaze the property line, an extra step not always required in a standard boundary survey. With the NYCDEP’s strong protection of their land to ensure high quality water for end users, this step designates the land to the right level of visibility for protection.

The total process can take anywhere from three months to a year. Once established, NYCDEP then maintains the property lines.

More recently, the NYCDEP has added the cleaning and rehabilitating of its aqueducts to its overall strategy, particularly since some of the system sections are showing their age. RETTEW is working with the agency to survey 75 miles of aqueducts, from the Ashokan Reservoir to the Kensico Reservoir.

The firm’s survey team identified and marked more than 300 access points, providing exact specifications for an aerial topography survey. Following the aerial survey, RETTEW used GPS coordinates to perform topographic surveys for 150 feet on each side of the aqueduct. The aqueduct rehabilitations will continue to provide potable water for the many people depending on it.

Providing clean water for millions of people is a crucial goal. The NYCDEP and its partners’ strategy and actions accomplishes just that, by ensuring absolute quality of the water, protecting the environment, and saving extensive costs. Surveying has played a key role in the acquisition of more than 130,000 acres, which, along with the 236,000 state-owned and other protected lands, totals 409,000 protected acres in this watershed. The long history of the New York City Watershed can continue its story into the future, thanks to the dedication of many parties over more than a century.