A former police officer hangs up his cuffs to make a greater impact supplying police departments with vital forensics equipment.

Precision Survey Supply in Rancho Cucomonga, California, provides equipment to construction and survey companies as well as municipal agencies, but the customers nearest and dearest to the heart of company founder and owner Sam El-Said are the police agencies that use his equipment for accident reconstruction and charting evidence at crime scenes. 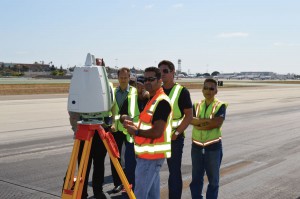 Representatives from the business Courtroom Presentations learn how a laser scanner works at the Los Angeles International Airport.

El-Said’s affinity for helping law enforcement stems in large part to his once being a police officer—a career choice going back to the tender age of 15 when he was growing up near East L.A. When police officers visited his high school to recruit students for a police explorer program, “I was in,” he says. “When I joined the Explorers I felt accountable to the officers. I rode around with them, I looked up to them, and I didn’t want to let them down.”

He stayed with the Explorers until he was 19, helping officers with reports and even assisting when they had to issue a ticket. “It was just awesome,” he says. El-Said remains a proponent of the program, and his teenage son is planning to join with their local sheriff’s office.

El-Said joined the police academy when he was just 19—even though you were required to be 21 to be a sworn officer—working as a police department cadet while he took classes. Issued just a uniform and belt and earning $7 an hour, his duties consisted of washing the patrol cars, running for coffee, and cleaning the office.

When he graduated from the academy he was still one year away from being 21, so he got a job with the University of Southern California campus police, where the most exciting thing he encountered was a stolen computer from a dorm room.

In 1997 El-Said was hired by the West Covina Police, just outside of Los Angeles, to work traffic and crime. “I loved it,” he recalls, mainly because that’s when I got into accident investigations and found a mentor, Dave Faulker. “I’ll never forget him taking all the extra time to teach me the ropes. It was because of Dave that I found the passion of being an accident re-constructionist.”

El-Said investigated fatal accidents, and the command staff was pleased with his work, sending him to Northwestern University in Chicago for more advanced training. Soon after he returned, “other agencies came to us for help,” and he started “bringing technology to the field. Instead of tape measures we went to total stations.” He began working more closely with surveyors, picking their brains about how the equipment operated and how it could benefit the work of law enforcement. 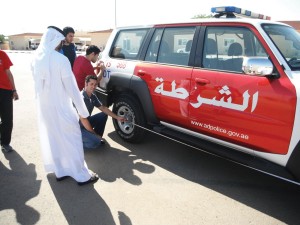 In Al Ain, the United Arab Emirates, traffic police students take a training course in the proper use of measurement.

By this time he was scheduled to rotate out of the accident reconstruction unit, but the department had invested too much time and money to just put him back in a police cruiser on the beat. Instead, they created a permanent position, which he held for nine years, working on hundreds of crashes and teaching others in the department.

He recalls a quadruple fatal crash, all of the victims in the same car. There was one witness, a minor, which El-Said says created difficulties when it came to entering into court proceedings. He and the other officers recovered physical evidence at the scene, and he went to his mentor for help. “This was the very first time we used a total station,” he says, and it accomplished all that they had hoped in terms of putting together a case the district attorney could prosecute. “We got a conviction,” El-Said says.

During this time he also attended classes to learn how to put all the collected data from a scene into a software program, training he passed on to his colleagues. “At this point I’m juggling three things at once,” El-Said says. “I was a cop, I was teaching cops, and I was teaching the software.” In 2005 he added even more to his schedule when he opened Precision Survey Supply.

“The first year I did a little station sales, some training,” he says. “By 2009 I was doing so much training around the country,” as well as internationally in places from China to South Africa and Australia. “I took vacation or comp time to run the business.” It was then that he decided to leave the police department to devote more time to Precision Survey Supply. 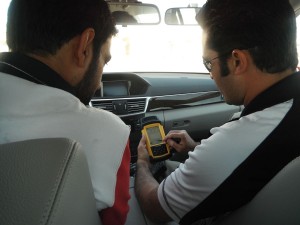 Lt. Hamid of the Al Ain police is trained by El-Said on how to use a data collector.

“It was the worst time in the economy; I was leaving a guaranteed paycheck to go run a company out of my garage,” he recalls. But, “it started growing by leaps and bounds,” and the garage became a 600-square-foot office, then grew and grew until this year, at age 40 when he’s working in a 6,000-square-foot space and his staff of one has turned into six.

With his business, El-Said said it’s his personal mission to provide the equipment needed to make sure there are effective police investigations, followed by the most unimpeachable
courtroom testimony so that “no one who is guilty gets off on a technicality,” says the man who qualifies as an expert witness in court.

It’s also his mission to be a one-stop shop for everything from the equipment itself to training to software and tech support. “If there’s a problem, you have one company to call, not like it was when I was” doing accident investigations. “My mission statement is that ‘if the system fails, it fails because of me.’”

It’s nothing, he says, “to get a call from a police officer at 2:00 a.m. with a technical question, maybe something he or she has forgotten from the training. “If it’s a local officer, I’ll drive down there.” El-Said admits with a chuckle that it’s also a part of his cop DNA to respond to the scene when he’s called—once a cop, always a cop.

Surveying equipment also comes into play when there’s a shooting. The tools are used to gather information such as where the shooter’s line of sight was and the trajectory of the bullet. “Without factual measurements,” it’s hard to make a case, according to El-Said.

Data collected at the scene is reconstructed using computer software. “You’re not at the scene making opinions, you’re collecting data. The investigation starts at your desk later.” 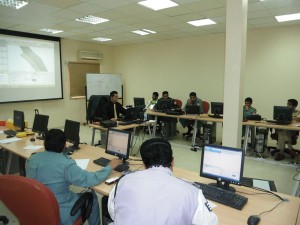 The Dubai police traffic investigation unit learned 3D diagramming in a classroom setting; they then applied their new skills when a fatal collision occurred nearby.

City police in Winston-Salem, North Carolina, are part of El-Said’s partner clients. Lt. Eric Montgomery, a 20-year veteran of the force and a member of the criminal investigations division, says their forensic services people depend on the use of total stations and other surveying equipment. He often sees them working on the scene alongside his staff.

“Technology certainly is an integral part of how we address and combat crime. You talk about bullets and trajectory: in the past” it was not as easy to piece together, but with today’s equipment, “we can understand things better,” says Montgomery.

El-Said says he is mindful of a police department’s budget. “You can spend $1,200 to $160,000. You can go basic, to having a robotic total station.” Again, his prices include training and tech support. “I remember as an officer having to go back and ask for more money for things [that weren’t included]. I don’t want that to happen to them. You get everything the first time around,” he says.

“Technology is always evolving. The average lifespan is five to seven years until you need to step up” and update the equipment, which is serviced and calibrated annually so there are no loopholes for the defense to use in a courtroom. “We never want to have anything be inadmissible. My reputation follows this equipment … I’m going to help my officers,” he says.

“This is the same equipment used by miners, land surveyors, railroads, architectural and engineering firms. A lot of the features we tailor for forensics … what takes land surveyors two or three years, we teach in five days; the job is that specific,” he says.

El-Said has a high degree of passion for what he does. “I hope we continue to grow, maybe have an East Coast office. I want to be able to pass the business down to my son, Matthew.”