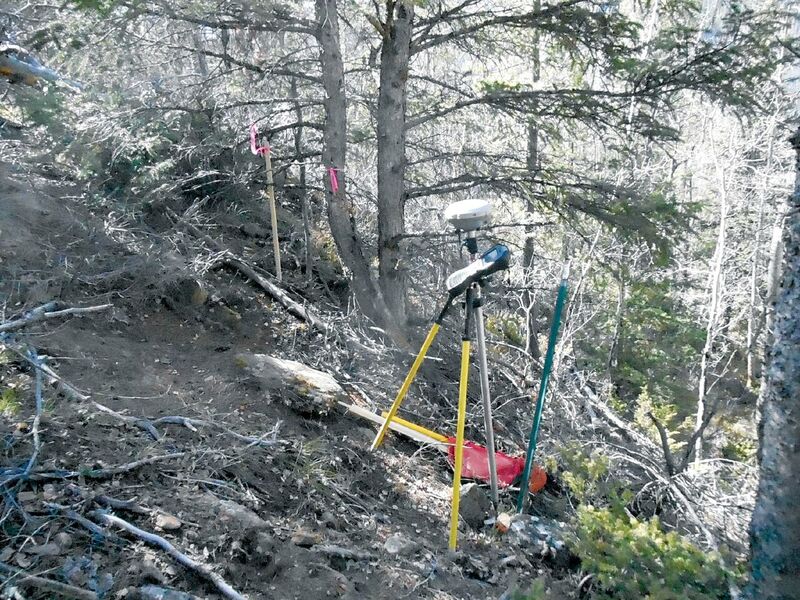 “I have to walk like a moose through this stuff!” claimed Glenny Dale, known on this crew as Glutton, The Old Man, because of his old legs.

He had found a game trail that gave him about eight inches of flat path. But he had to tightrope his way through this thick sagebrush and forested hillside by lifting high one knee at a time, steeply uphill: an exhausting, slow process.

“You look like a moose!” giggled Igor Kidinsky, whose crew name was Eager, The Kid.

His decades-younger legs had the strength to climb the steeps, but he still groaned when he realized that the data collector was telling him to go about 100 feet more on a direct course to the other side of a very steep ravine.

They were hoping to find a homestead entry corner set in 1920. They had a record saying that this corner had been re-established by a local surveyor in 1980. They both now realized that this steep ravine likely caused the disappearance of the 1920 HES stone, something they couldn’t tell by looking at the flat map in the office.

They were also expecting to find an aliquot corner about 10 feet away, set in 2014. And it was Eager who first spotted the older steel fence post and had shot in both monuments by the time The Old Man puffed his way up the game trail.

“Lucky us!” cried The Kid. “This guy just set this 1/16 corner two years ago, and he did a proper and thorough section breakdown.” The relief in the kid’s voice suggested that even he, the one with endless enthusiasm, dreaded the thought of miles of hiking through this overgrowth.

“Why do yet another section breakdown?” he reasoned out loud, but he was thinking that the only proper way to confirm this monument is by doing another dreaded, full, thorough, and painful section breakdown.

“Lucky, we are!” panted The Old Man. “That local, 2014 survey is all bread and no salami, because we don’t really need the 1/16 corner. We just need the homestead corner, and there it is. This is a metes and bounds retracement!”

The Old Man, panting steadily, continued, “We live in a state that was drawn up in Washington, D.C. for the purpose of helping contain and limit slavery. The south line of Colorado was agreed upon by Congress as the northern limit of the slave states, and its definition of 37 degrees latitude could only be located by a surveyor.”

“For years, all efforts to enact the Homestead Act were defeated by the pro-slavery representatives who needed large plantations and wanted them unrestricted throughout the expanding West. When the Confederate states left the Union, Lincoln saw a political opportunity. He now had the votes in Congress to pass the Homestead Act of 1862, and he signed into law one of the best weapons ever devised to defeat slavery short of the Emancipation Proclamation!

“The Homestead Act–limiting each tract to 160 acres and requiring one 12 x 14 home, open to all citizens and freed slaves but prohibited to any Confederate soldier–guaranteed the expansion of the West as we know it. Each settlement would be too small for a plantation, open to any color of citizen friendly to the Union, in an orderly manner–with surveyors, such as Lincoln, leading the way.

“We are standing on one such example of the greatest political victory over the long fight against slavery enacted by Congress.

“Abe Lincoln was a rail-splitter! He bashed a lot of southern Congress’ heads wide open with his political war club, as if he were swinging his huge, rail-splitting axe to beat back slavery itself.

“Then, Abe Lincoln used his surveying skills to devise the way that homesteads would be laid out going west by surveyors. All homesteaders would be free people, of any color, proving the idea that the United States’ prosperity depends on a man willing to build a small cabin and work the land. This was deliberately opposed to a proposition that prosperity came only with large plantations, slaves, and a lot of indentured poor people.

“Fittingly, the first homesteader was a doctor named Daniel Freeman who showed up at the Land Office at 12:01 a.m., then homesteaded in Nebraska, near the Town of Lincoln, of all towns.

“I have no problem accepting this old surveyor’s homestead corner, with all the pride this old body can muster, and I don’t mind that it’s about 10 feet away from that 1/16 corner, do you?”

When The Kid looked up to answer, he was startled by the majestic sight of a bull moose standing only 20 feet behind The Old Man. Moose are not the slightest bit spooked by people. He had wandered along the game trail and was mostly blocked from view by the heavy underbrush of the forest.

His hooves were six-inches wide, and he lifted his knees high, but he walked forward in a straight, awkward line.

The moose, The Old Man, and The Kid were now trading stares, all three wary and amused. The moose looked on with his curled brow, a huge, trunk-like nose, permanently flared gigantic nostrils, and a human-like grey beard, then wandered slowly away.

Eager realized that this friendly moose’s face looked very much like The Old Man! He started to giggle at this thought but soon had no control, and the two surveyors started walking back to the truck, slowly, looking and walking like a pair of moose, but laughing hysterically, step by step.

The Old Man never knew (and was never told) what was so funny.