Traditionally, photogrammetry based on aerial images and stereo plotting, has been the realm of large mapping companies capable of affording the onerous ownership of planes and the high personnel cost of pilots, navigators and camera operators. The equipment used to convert the stereoscopic pairs into contour line maps cost hundreds of thousands of dollars and occupy large rooms with controlled environments and strict building codes. All of that changed a few years ago when small unmanned aerial vehicles (sUAV), a.k.a small drones, were equipped with high-definition cameras and stereo plotting technology became 100 percent digital, de facto creating a mapping revolution that allowed small surveying firms to upgrade to full-blown photogrammetry concerns.

This revolution, in the developed world, encouraged competition and lowered prices, but in the developing world gave high-quality mapping access to sectors of the economy that needed it the most but couldn’t afford it. An added advantage of sUAV in Latin America is that the skies are not as crowded as in North America or Europe, and fewer planes means less regulation, opening the door to the rapid expansion of drones for commercial uses in mapping and agriculture. 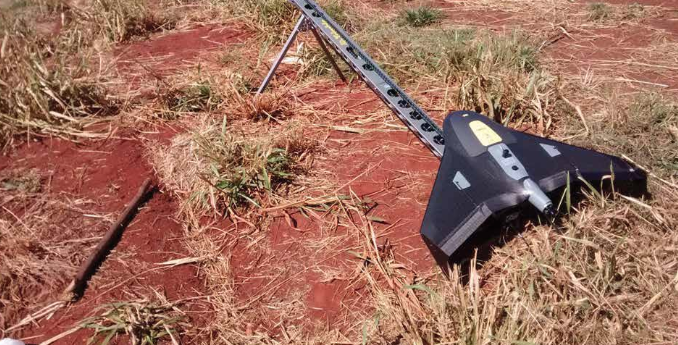 Trimble UX5 on its launching catapult.

One added benefit of aerial imagery is that surveyors don’t have to physically step on the terrain they are mapping. This is particularly important and relevant in areas where treacherous conditions exist, such as waste disposal areas where circumstances on the ground are unstable and dangerous fumes might be a hazard to the health of the surveying personnel.

One land surveying company in particular, i-BC SRL in the province of Misiones, Argentina, has been migrating from traditional methods and including a drone and mapping software among its services to remain competitive.

Recently the company won an RFP that was perfect for its new UAV equipment, which could execute the job from the air and avoid personnel presence on the ground for too long.

A local waste disposal site had been scheduled to grow outside of its present boundaries and therefore, the managing entity needed a land surveying company in the area to identify exact boundaries. The site had been used by a local fertilizer plant to discard dangerous chemicals, and it was also the “unofficial” local garbage dump for a small city nearby.

Surveyors working at the property in the past had complained about foul odors and throat irritability. Now the company managing the location needed a precise map of the depot to expand and build a fence around to avoid illicit dumping. The RFP included the following requirements:

i-BC personnel reviewed the requirements and eventually decided to prepare a proposal based on the use of a drone with ground control points on the periphery of the site, limiting the approach to the area to a minimum.

A few years back i-BC made the leap from land surveying into full-blown photogrammetric services with the acquisition of a fixed-wing mapping UAV. We had the opportunity to connect with Cesar Camblong and Ramiro Baez, founders and co-CEOs of i-BC to better understand the challenges of committing to such a move.

“The purchase and proficiency of the unmanned platform is just the beginning of the transformation into a cartography company,” said Ramiro. “We knew that we could take photos and then turn them into amazing mapping products, but the challenge remained on how to help our customers use the information in a way that would allow them to improve efficiency and save money.”

The move to photogrammetry involved a deep understanding of the relationship between the establishment of ground control points (GCP) and the required precision. They prepared a financial and technical bid for the waste disposal site, and offering something that could be done in one day as opposed to the 10 days it would take for traditional land surveying methods using total stations and an abundance of field personnel.

The typical deliverable of a land surveying job was a paper product that customers were able to handle without many instructions. With this new technology the deliverables are complex digital products, which created a challenge for the customer. So i-BC decided to deliver in a way that would be useful but not cumbersome.

“We noticed that the end product we generated for our customers was complex and contained too much information for a single sheet of paper,” Cesar explained. “We faced a dilemma: to deliver a watered-down product or develop a simple tool that would allow our customers with low GIS experience make the most of their maps and the associated data. We have other GIS customers and knew from them that this needed to be a field experience.”

Once the contract was awarded, i-BC planned the establishment of GCPs using high-precision GPS and a planning software that allowed the selected locations to provide the necessary geometrical strength to guarantee the required precisions.

Yellow targets 15 cms (8″) were placed on the GCPs and the entire survey was linked to the site’s established survey network. They waited for a clear day with good sun angle to increase the efficiency of the images and executed the flight in one hour.

After the images were fed into the image processing software and the GCPs were processed and added to the images for compensation, the final product was ready in record time. Apart from the traditional digital terrain model (DTM), contour lines and profiles, i-BC decided to deliver the end product also in a phone-based application that i-BC had developed for agricultural customers months before. Adapting the app to the needs of the waste site was not difficult and proved to be a winner with the hiring managers.

“We developed a free, smart phone-based, app that would give access to the cartographic information through a very basic GIS for multiple users and portable,” Ramiro said. “This allowed the managers of the waste disposal site to bring the orthophotomosaic to the field and make decisions on the spot. It was a great hit and reinforced the concept that digital information doesn’t necessarily need to be complex and constrained to the office. By providing this information on a mobile platform we empowered the decision makers to adapt to ever changing conditions, increasing efficiency and reducing costs.”

Another advantage of using a DTM was that the calculation of volume of waste was easy and could be accomplished at no extra cost, something that the contracting agency found very appealing and would almost certainly guarantee that i-BC will return in the future to keep evaluating the site and volume changes.

By switching to unmanned photogrammetry, i-BC was able to secure a new customer and almost guaranteed a new and recurring revenue stream in a very competitive environment.