On a construction site, cement and concrete finishers, carpenters, framers, electricians, plumbers, flooring installers, and other trades people spend a lot of time taking measurements and interpreting blueprints before they can even start any of the specialized tasks they are trained and paid to perform.

Until recently, it was not possible to project the blueprints onto the construction surfaces—floors, walls, ceilings, and pillars—with sufficient accuracy and sharpness to guide workers in cutting, drilling, fastening, and so on. Now, however, the LightYX BeamerOne robotic system promises to bridge the gap between the building information model (BIM) in the office and the work site, according to Guy Benromano, LightYX’s co-founder and CEO.

“BIM is spreading all over, very fast,” says Benromano. “However, workers on sites are having issues placing the 3D model into something with which they can work. We would like to guide the workers and show them where to position all the utilities, such as walls, mechanical components, electrical conduits, or plumbing fixtures.” The system, he explains, ensures that all the stakeholders are viewing and acting upon the same version of the plan.

Augmented reality (AR) goggles—which superimpose information, such as measurements, onto physical reality—are good for gamers but not yet sufficiently user-friendly for construction workers and lack millimeter accuracy, which requires lasers. LightYX’s system, intended to complement surveying equipment, projects construction plans with an accuracy of three millimeters up to a radius of 10 meters.

“In a few months,” Benromano predicts, “our accuracy will reach one millimeter.” 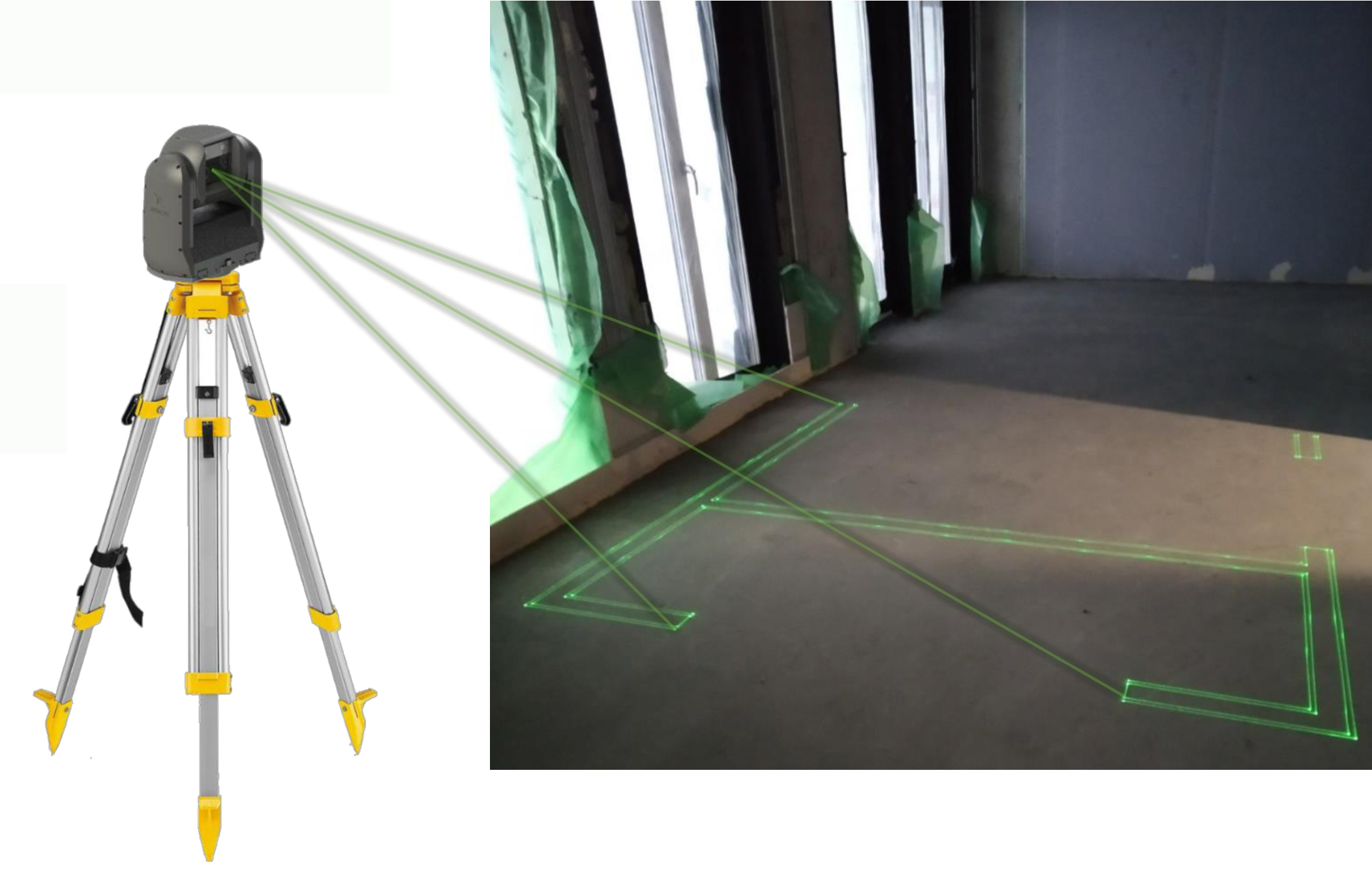 LightYX’s Beamer One projects laser lines from blueprints on to the con-struction site, giving crews highly accu-rate guidance and greatly facilitating communi-cation on changes to all stakeholders.

In the traditional workflow, a supervisor uses printed blueprints to explain to the workers what needs to be done, a surveyor marks at least three control points (sometimes as many as 20) on the surface, and the workers use a ruler and a laser level to mark gridlines and measure the exact positions of the electrical or mechanical utilities that they are being paid to install. When the as-built differs slightly from the plan, as is often the case, a skilled worker marks the changes on the blueprint for an architect to approve, which can take as long as a week.

LightYX drastically reduces the number of steps involved. At the construction site, accurately positioning the BeamerOne requires the surveyor to mark only three control points. Next, a worker downloads from the cloud the blueprints, which are typically stored in a platform like BIM 360, as a 2D or 3D model.

LightYX’s technology automatically converts it to a projectable plan and makes it available as a PDF through a proprietary mobile interface. The user can then see the plan on a mobile device, select the layer to project, mark the area of interest, and send it via Bluetooth to the BeamerOne, which projects it onto the floor, the wall, or the ceiling using lasers. This also instantly reveals discrepancies between the as-built and the plan with millimeter accuracy. Additionally, the device can be used to measure distances by simply tapping any two points in a 3D environment.

“Once we are satisfied, we save the updated drawing to the cloud and send it to all the stakeholders, so that they can be aware of the new, updated plan,” says Benromano. “We can also send them a photo, because our robot has several types of cameras, including a depth camera and an HD camera. So, you don’t have to wait a week for confirmation.”

Modern buildings often contain many conduits. (Benromano cites the example of a luxury building in London that has more than 20.) In the traditional workflow, each one is tagged with a number and workers consult a printed booklet to match each number with a specific conduit. The BeamerOne eliminates that step by projecting each conduit’s number. Likewise, it projects the size of openings for doors and windows. “This is worth a lot to the workers, because it saves them a lot of time and headaches,” says Benromano.

Currently, uneven surfaces cause minor deflections of the projected lines. However, Benromano promises, in a few months, once the device will be ready for commercialization, it will automatically compensate for surface imperfections. This is particularly important when projecting onto curved architectural elements, he points out.

LightYX buys commercial off-the-shelf (COTS) hardware but designed its own form factor and is designing its own architecture. “Our chief architect, my partner, was in a secret group at Intel that was working on a depth camera for future autonomous cars,” says Benromano. “He specializes in depth cameras and lasers.”

To build the BeamerOne, Benromano’s team had to overcome several challenges. First, it had to develop a method to compensate for the resolution of the depth camera that scans the environment, as well as for the ways in which the as-built diverges from the plan. Second, it had to compensate for the way the device’s physical components behave when they heat up, such as when the device is in the sun for long periods. Third, it had to develop a way to control a mechanical system that includes components that are rotating at a very high frequency.

“We are not using components that cost millions of dollars but ones that cost dozens or hundreds of dollars,” Benromano points out. “With all these cheap components, we still need to be accurate up to microradians, which means that we need to be accurate at three millimeters for a 10 meter radius.” The ability to compensate for all these errors while maintaining accuracy is what makes the product special, he argues. “Few companies have tried to develop this. We were the company that succeeded in doing it.”

“We are aiming for a one- to two-minute setup,” says Benromano, “so it must be one to three stages of operation. We need to make sure that the learning curve is very fast.” The bigger challenge is the adoption curve, he points out, because the complete workflow, from downloading the blueprints to projecting them, will be more complex than operating the device and will require a mobile device. The BeamerOne will be seen as “an assistive piece of equipment” until users learn to trust it enough to rely on it.

Currently, LightYX has a minimum viable product (MVP) that is ready for testing and piloting but not for commercial deployment. “We still need to develop a very user-friendly setup,” says Benromano. “Though we aim for the foreman, we want it to be dummy-proof for even the least trained worker.”

Additionally, he points out, to address the construction site environment it needs to be ruggedized and be able to survive falls. “I anticipate that it will be ready within 12 months, but now, with COVID-19, nothing is sure.” Then, the company will need to support the product intensively with training and provide onsite support in case of errors or malfunctions.

While Benromano expects the device to be more expensive than a total station, he admits that the company has not yet decided whether its business model will be based on a one-time payment, a robot as a service, or a monthly fee. “We are going to work with the market and listen to the feedback,” he says.

“Our vision is to be able to project any kind of layout on any kind of surface,” says Benromano. Users will then be able to adjust the projected line to the as-built and send it back to the architect for approval. “In the future, we will be able to remotely assess the quality of the job, record it, and generate the new as-built,” he predicts. 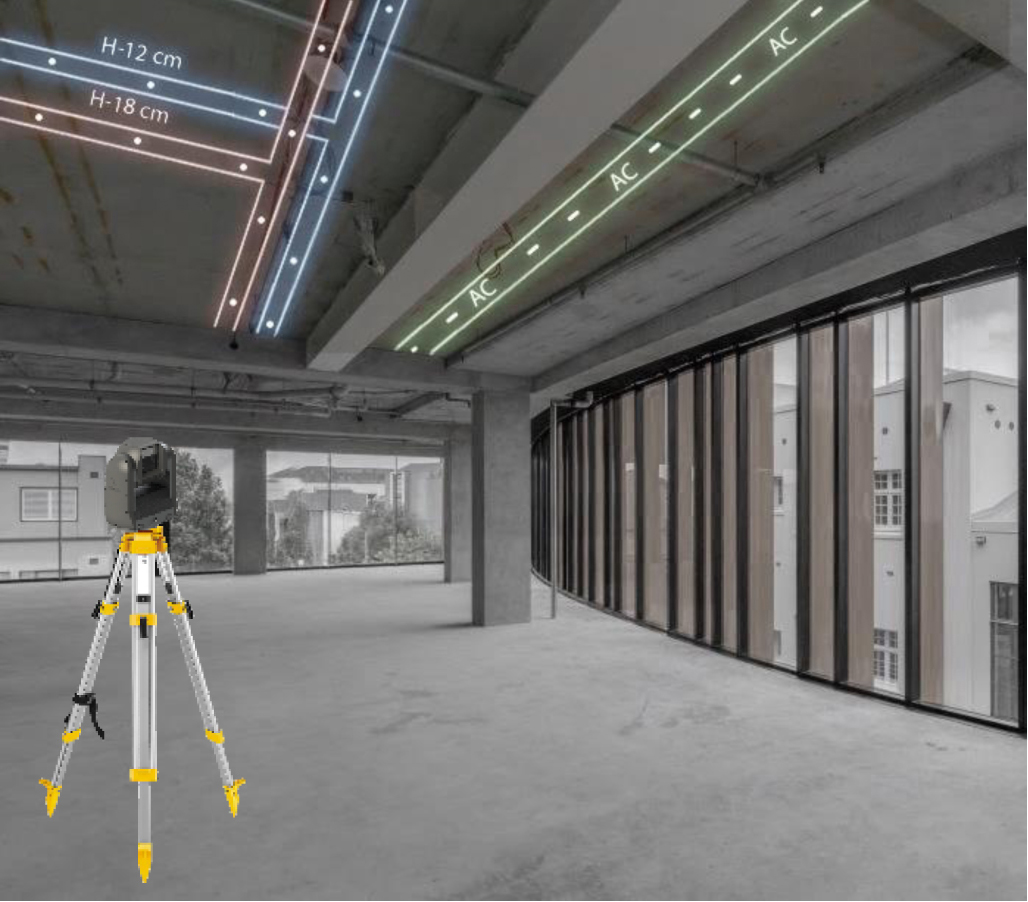 The Beamer One also projects additional informa-tion, such as measure-ments and the purpose of a conduit.

Aviad Almagor, senior director, emerging technologies, at Trimble Inc., met with LightYX in Israel about a year and a half ago, when they were in the early phase of development. “Since then, I have been following their progress,” Almagor says, “looking for the synergy between what they are doing and our technology and how their technology can be embedded in our customer workflows.”

Almagor sees a good synergy between Trimble and LightYX. “The construction industry is going through a digital transformation process,” he says. “An important part of this process that is sometimes forgotten is about the connection between the digital and physical environments.”

Trimble is using mixed reality (MR), robotic total stations (RTS), and machine control to bring together the digital and the physical. “LightYX is definitely well aligned with our vision of connecting the digital and physical environments and with our product line.”

One potential solution that Almagor envisions is to marry Trimble RTS, which have sub-millimeter accuracy, with LightYX’s solution to jointly provide a “rich visual feedback.” The result, he predicts, will be to “improve productivity by enabling the team on site to work simultaneously on multiple assets and improve quality by clearly visualizing the data in context and avoiding errors.”

For the moment, however, “it is more important to focus on the workflow and how we support it in a more flexible way, and with that in mind we can get the right configuration of the hardware,” he says.

Almagor sees a continuum, from RTS, which have extreme accuracy but are stationary, to the BeamerOne, which is less accurate but can project 2D content, to a full MR device that in the future we will be able to visualize holograms but will, initially, have a still lower accuracy.

“LightYX Adaptive Projected Reality (APR) technology is on the continuum between Trimble’s millimeter accuracy RTS and Trimble XR10’s rich holographic visualization,” he says. “We are working closely with the LightYX team to identify synergy and potential business workflows.” 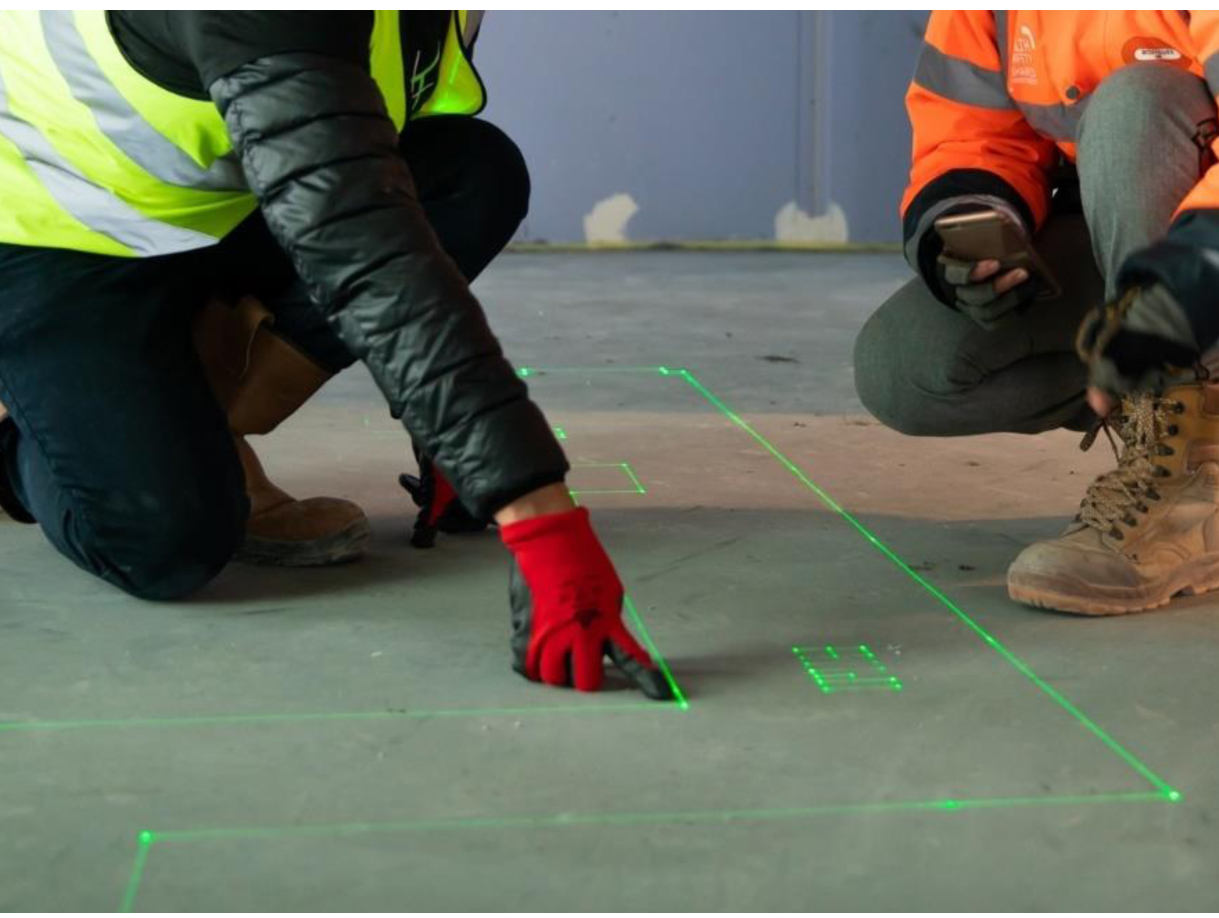 Projecting the blueprints directly onto the build-ing surfaces saves the workers a lot of time, because they don’t have to take measure-ments and mark them.

LightYX is not trying to replace surveyors but is complementary to them, according to Benromano. “We bring the complete workflow.” Having spoken with many companies, mainly in Europe, he claims that his company’s device can save 80 percent of setting up and positioning time and, extrapolating, that it can prevent 30 percent of the mistakes.

“Seven to 15 percent of the construction budget is typically spent on mistakes, most of which are due to misplacement of the utilities,” he says. While the increased efficiency is great, he points out, construction companies care more about how the BeamerOne will reduce errors and uncertainty. “The real value is the peace of mind it brings them, which is something that we cannot quantify.”