Deep in the heart of Oregon’s Coastal Range, you can find an elite team of surveyors taking on some of the hardest terrain in the country. Oregon’s dense forests and steep mountain foothills are a challenge to traverse, but at Northstar Surveying, Inc., of Corvallis, it’s just part of the job. 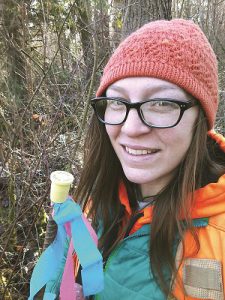 Heidi Jackson sets a property corner in a wooded swamp.

Under the stellar leadership of David Schlosser, this small group of surveyors is the toughest I’ve ever had the privilege of working with. I recently spent just over ten months working alongside them, and the lessons I learned about teamwork, tenacity, and boundary surveying will stay with me for my entire career.

I had only just graduated from the surveying program at Bellingham Technical College in Bellingham, Washington, and relocated to Oregon. I thought I was well prepared for my first ‘real job’ as a surveyor since I had learned so much from my amazing internships at the WA Department of Natural Resources and the high-tech, fast-paced Bellevue firm, 1Alliance Geomatics.

Northstar hired me, in part, on the merit of an article I wrote while I was a freshman surveying student about wanting to be Indiana Jones with a tripod (it’s on xyHt’s website, and they told me to tell you it’s very popular). Writing that article opened a lot of doors for me and working at the DNR sure did make me feel like Indiana Jones, but I had no idea that my idealized notions of adventure would pale and cower in the harsh reality of working in Oregon’s timberlands.

Day one on the job, I was sent to mark line on a site called Missouri, which everyone affectionately called Misery. The number of times I believed I would die that day was substantial.

At the end of the day, broken and beaten from hiking up and down massively steep terrain in a torrential downpour while carrying a pile of steel posts and having nearly macheted my thumb off when I slipped in the mud, I went home and immediately contemplated whether I could even handle a job like this.

I wasn’t sure I could do it but, every day that first week, one of my coworkers told me they hoped I wouldn’t quit. Because they made me feel like part of the team, I became determined to stick with it.

Expectations are always high in the surveying profession, and at Northstar I was taught by example to drop all excuses and rise to the challenge. There were many days when I felt like giving up but seeing the fearlessness and grit of these tough surveyors threw down a gauntlet for me, and I kept coming back, stubbornly, day after day, to try to earn their respect. 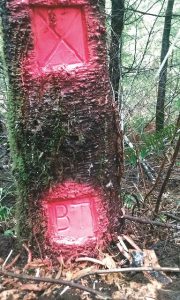 Heidi and her field partner, Benji Utley, competed to see who had the best scribe handwriting on a bearing tree.

Fitting in with such a rugged crew was not easy for someone like me – fresh out of surveying school and not particularly fit. In my mind, they were taking bets that I wouldn’t last a week. I’m sure it was frustrating for many of them who could run 1,000 feet of line without breaking a sweat to suddenly be saddled with a rookie like me (when I started, I could barely lift an instrument into the truck without using both hands).

But, instead of making fun of me or asking me to leave, they took me under their wing, and each, in his own way, taught me how to be a better surveyor. They showed me how to run a successful traverse over rugged terrain in terrible weather, with a sense of humor about the hard parts and a humble gratitude for being able to step foot where few have ever gone before.

There were days out in those mountains that I will never forget. Snapshots cross my mind as I write this. I remember taking lunch on a slope covered in wild ginger and falling off a log bridge into ice cold water on a hot day. I learned the names of tall trees and how to see a straight line through the brush. I learned how to hold a prism plumb and that I could push myself through fatigue and hunger when I had teammates who were rooting for me.

Cheering for each other when we closed a particularly treacherous traverse well under tolerance or getting back to the office after a long day in the woods and still being excited to hear what the other teams were up to that day made working at Northstar something special.

When circumstances called me back to Washington state ten months later, it was with a very heavy heart that I left my comrades at Northstar. Though I was there only for a short time, when I left I was in the best shape of my life and felt like I had gained a family.

I’ve looked around, and there aren’t many companies that do the kind of work that Northstar does anymore, in the kind of terrain that they work in, and certainly not with the same group of amazing people, so I will always be grateful for this singular experience.

As I told them when I left, I will look back on my time with them as one does their time in boot camp. I learned a lot, it hurt like hell, and I’ll never be the same. Nor will I ever drive down a mountain highway or over a steep ravine without thinking of that extraordinary group of surveyors still out there blazing trails in the pouring rain who, for a brief and wonderful moment, made me a part of their team.