In the previous article (July 2015), I introduce the concept of sampling distributions and the need to use these distributions to analyze small samples of data. In surveying, observing small samples is typical where angles are often observed only two or four times, and repeated distance observations simply means pushing the measure button more than once. Sampling distributions are based on a sample’s mean and variance as well as the number of redundant observations known as its degrees of freedom.

As the number of redundant observations increases, the critical values from the sampling distribution approach the values for the same confidence level from the normal distribution.

In the past the only way to determine the critical values for a distribution was to have access to a statistical table. However, today spreadsheets provide this capability with built-in functions.

For example, in Excel the function to determine a critical value for the t distribution is tinv (α,v) where α represents the level of confidence and v represents the degrees of freedom. So in the aforementioned scenario, it would be tinv (0.05,3) where α is 0.05 (95% probability level) and 3 is the number of degrees of freedom in the sample of four observations as previously discussed. [Note that Microsoft Excel requires the entry of 0.05 for the critical t value (t0.025,v). This is not the case with other distributions.]

In this case the critical value, our multiplier for a 95% confidence interval, is 3.182… This value is far different than the value of 1.96 derived from the normal distribution. This value is greater simply because our sample size is small, and thus there is more uncertainty in the mean and standard deviation than was determined from the sample of observations.

Recall that in a previous article on the normal distribution (June 2015) I state that multipliers from this distribution are valid only if we observe more than 30 repeated observations. Since this seldom happens in surveying, we need the t distribution to analyze our data for outliers and blunders. 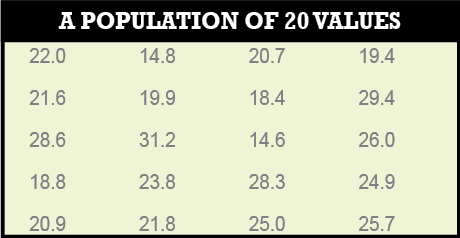 Here I look at how the t distribution can be used to perform this analysis. To show this, Tables 1 and 2 from the previous article are repeated here.

As an example, using line 1 in Table 2, we can state that 95% of the time the population mean will be between what’s shown in Equation 1 where ȳ is the mean for the sample, S the standard deviation for the sample, n the number of observations made, and t the critical value from the t distribution for α percentage points based on a sample with v degrees of freedom.

The t value for a sample with 3 degrees of freedom is 3.183, which is considerably larger than the 1.96 (or 2) multiplier that would be used from the normal distribution. This larger multiplier represents the uncertainty we have in the mean and standard deviation from the sample due to the limited number of observations used to determine these values.

Thus, we can state with 95% certainty that the mean for the population is between 18.39 and 33.60, which also means that 5% of the time the population mean will be outside this range.

A more common use for this distribution is to determine the range in which 95% of the observations should lie. This is typically used to identify and remove outliers or blunders from the observations. Thus we are stating when we do this that we are willing to discard 5% of our observations as possible blunders, which is why 99.7% is sometimes used.

If any observation is outside of this range, it could be considered a blunder or outlier and discarded from the sample. Again, this means that we are willing to discard 5% of our observations in order to remove any possible blunders.

It is important to remember that when we are surveying, we generally collect very small samples for our observations. Thus, the sample means and standard deviations have higher levels of uncertainty than those derived from the normal distribution, which comes from an entire population of observations. Unless we collect more than 30 samples of a single value, we really should be using the critical values and multipliers from the t distribution and not the normal distribution.

Until then, happy surveying.