Last month I wrote of two “Ah Ha” moments early in my career: situations where the “light came on” from a surveying experience, even if the value of the moment wasn’t fully understood at the time. In this issue, I share a couple more: where a practical application cemented abstract concepts and where a lack of knowledge resulted in the undermining of sound fundamentals.

In the summer of 1984, while working for a local utility company, I was fortunate to be selected for a summer-long assignment on a topographic mapping crew. I was chosen because of my prior drafting experience, not because of my surveying knowledge, which was very much still “under construction.”

Our job was to spend the summer doing topographic mapping of lakeside areas along three lakes in the El Dorado National Forest for future campground and trail developments. The utility company operated all three lakes as part of their hydro-electric power system and maintained a private campground for employees and retirees at the largest of the three lakes. 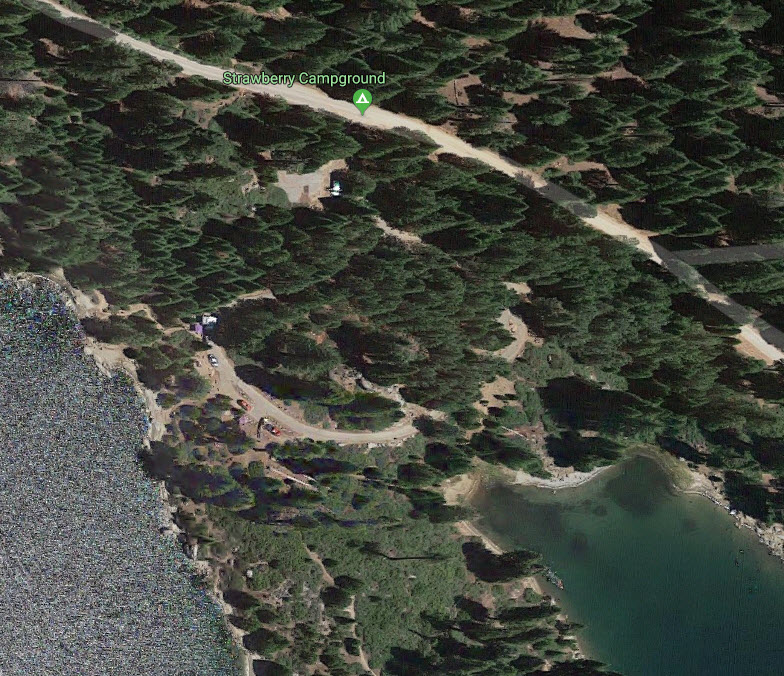 One of the sites we surveyed that became a campground.

That campground would be our weekday home for the duration, which by itself was pretty grand for a 25-year-old outdoor enthusiast. Each campsite had electricity and water. The community area had an ice maker, hot showers, and horseshoe pits. I was in heaven and getting paid for it!

The party chief was a seasoned surveyor who had worked for many years for the California Beaches and Parks Department doing mapping. The instrument man was a journeyman surveyor with private- and public-sector experience. The draftsman was just a guy loving life in the mountains. 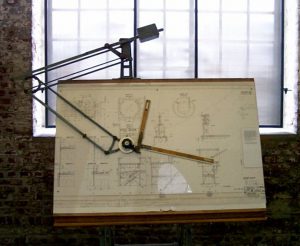 We were to use stadia techniques to collect the data and draft the map in the field in real-time. I was equipped with a drafting board on a tripod, with a drafting arm attached. Pencil-on mylar was the medium. Although I had plotted topographic surveys from field notes using a drafting arm, I had never done it like this. I had never seen stadia measurement used, either. It was tough on the back, but I got used to it. I also learned something on the first full day of mapping—you can still get sunburned through a tee shirt!

At each site, the steps in the process were roughly the same. The crafty party chief would walk the site limits, wandering through the conifer forest and granite outcrops to, and along, the shoreline, planning his “attack,” tapping in lath along the way. Those lath became local control locations, chosen for maximum 3D mapping potential and intervisibility.

Once the control was set, based on assumed coordinates, assumed vertical datum, and assumed meridian, the scale at which each site was to be mapped was determined. Some sites were an acre or less. Others were several acres. The amount of features to be mapped also helped to determine the appropriate mapping scale.

Once that was determined, the first mylar sheet was set up on the board, the control plotted, and off we went.

Watching the old timer run the rod was a thing of beauty. He danced through the forest with tactical perfection, selecting locations to take shots that would often yield multiple feature locations. He would call back what the initial shot depicted, such as “face of 16” fir.” Then he would call “from the shot, plus 6.3’, 5.2’ left (90° offset looking from the instrument) 12” fir.” Sometimes there were several “calls” from a single shot. As he was calling out the features, the I-man was giving me the angle right and distance, which I quickly plotted using the drafting arm after having set the vernier to zero on the backsite.

As each day progressed, the graphical depiction of the physical site was coming alive on the mylar. It was my first experience with “field-to-finish,” except we never left the field. Once all of the planimetric features were mapped from a set-up, the “chasing of contours” began.

Again, the experience and skill of our “rodman” was something to behold. His eye for staying on a constant elevation in undulating terrain was uncanny. Rarely did the I-man have to adjust him up or down more than a couple of tenths of a foot. As he collected, I connected, smoothing in the contours as we went, stopping at the edge of a large granite outcrop, then picking up on the other side and chasing the contour from there. Once the chief reached the limit of mapping from that setup, he would tap in a lath for reference to make sure he knew how far to go from the next set-up.

It was the ultimate training in 3D mapping for me. It is often said that draftsman should go in the field and collect topo to get better at drafting them, and field hands should take a crack at plotting topo from their own notes. Both would benefit from walking in the shoes of the other. I was doing it all at the same time. If there were “holes,” we could see them and fill them. If something looked odd, we would fix it by adding an intermediate shot or doing some checks. Reading stadia distances all day long is tough on the eyes, and mistakes were made, but they were caught and fixed onsite.

We repeated this process day after day, site after site, for almost two months. We would break out our trout rods at lunch and after work before heading back to camp. I often went stream fishing in the evenings, or pitched horseshoes with the other “campers.” It was the best surveying gig I have ever had.

But most importantly, I developed “3D vision” that summer that aided me immensely in both the field and office from that summer forward.

Fast forward to about 1995. I had learned a lot in those 10 years. I obtained my license in 1987 and started to immediately work at the professional level. I oversaw and processed the work for field crews, ran crews, planned work, and eventually performed boundary analysis and signed and sealed the deliverables. I had developed a solid foundation with the help of mentors and from being “thrown” into the fire many times.

I was now working as a party chief for a large state agency and was introduced to GPS technology for the first time. Although I was given formal training, both field and office, these magic boxes were still very foreign to me, but I was assured that they were the best thing to ever come along for surveyors. 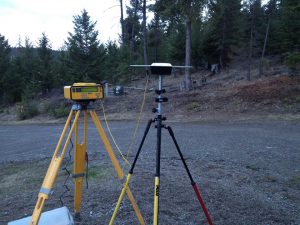 Armed with two magic boxes, I was assigned the task of setting and controlling the aerial targets for a large-scale topographic mapping project for a river restoration program. With a few quad sheets, a pile of NGS datasheets, some old field notes, and a field hand, off I went to the site 200 miles from the office.

Using the quad sheets and datasheets provided by the office, we recovered horizontal and vertical control along the mapping route and set targets along the way. That phase took a couple of weeks.

Then the field observations began. We would set up a base on a control point, then take the rover and do static observations on the surrounding targets and other recovered control. We would then move the base and repeat, without tying any of the points located from the previous base location.

Each night I would process baselines in my motel room to make sure the data had been collected without a hitch. As the work progressed, I watched asterisk after asterisk appear on the computer screen as baselines were processed. No asterisk was connected to another, but we were sure covering a lot of ground quickly compared to traversing and running levels.

We completed the field observations and headed home. I proudly turned in my floppy disks to the office guy for checking, final processing, and adjustment. That was on Thursday. He processed on Friday and I returned to work on Monday, anxiously awaiting my “attaboy” for kicking behind.

Instead, when I asked how it looked, these are the words I heard: “That is the worst survey I have EVER seen.”

What? I got in his face almost immediately, citing my resume, my license, my years of experience, and reputation for quality.

He backed up and calmly said, “Don’t take this personal. Let me explain why.”

In a matter of minutes, it became painfully apparent that he was correct. No checks. No redundancy. No interconnected control from one base location to another. Nothing. Oh, and a mixed hodgepodge of control from different level runs, different datums, different eras. A total MESS.

Despite my solid foundation gained from years of terrestrial surveying, the magic boxes had made me lose my mind. They had drained me of every bit of sound surveying practice I had ever learned. I was embarrassed, mad, humiliated. And I was better for it in the long run. Lesson learned.

And then, an intervention from a higher power. Word came that the project had been scrapped and that the mapping was not needed. My screw-up stopped right there. Well, at least it didn’t cause further damage. But that lesson never left me, and I never forgot those words: “Don’t take this personal” as I mentored others over the years and continued to learn myself.

The measuring tools may change, but the sound procedures and practices of applying them properly never will. I am sure I am not the only one who had to learn that the hard way.