One of the largest providers of surveying and geospatial solutions is a company you might have heard very little about. That is about to change.

In September 2019, I visited the HQ of CHC Navigation (CHCNAV), a company I had only cursory familiarity with. In North America, surveyors may have heard the name and seen a few CHCNAV rovers and CHCNAV partner rovers, but they may have not been exposed to what the company has to offer. It seems the general impression here is that it is a third-party OEM GNSS integrator; that characterization is far from the current reality.
I’d been watching the company for years. It seemed the time was right to visit CHCNAV. When I did, I was not prepared to grasp the sheer scale of their operations, the range of products beyond GNSS, and their staggering market share.

In northeast Shanghai is the Beidou Research Institute, a center established to foster GNSS development and innovation. Beidou, the rapidly growing GNSS constellation (nearing completion due to a launch schedule that saw as many as a dozen sats launched in a single year) is viewed as an opportunity for commercial development. And literally right next door, is the massive five-story, shiny new headquarters of CHCNAV.

The first thing I saw outside of the building was scanners being tested. CHCNAV may have started with GNSS, but their reach has expanded in a big way. 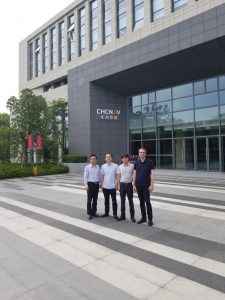 The name CHC stands for “China HuaCe Corporation.” HuaCe roughly translates to “surveying,” as that was the original market pursued by founder George Zhao and makes up about half of its current sales. The company and product name are more commonly known by “CHC Navigation”, CHCNAV, and simply “CHC” in the vernacular in North America.

Zhao, founder, chairman, and CEO of CHCNAV, is a bit of a legend in GNSS circles for what he has built in the past 16 years. We are publishing a full interview with Zhao next month, but here are the highlights.

Zhao was an engineer with a manufacturer of optical instruments in Beijing in the early 1990s and had an opportunity to work in the U.S. for 18 months. He witnessed the adoption of new geospatial tech, and, a decade later when the massive infrastructure boom began back home, he saw GNSS as being a key resource and anticipated a growing demand.

Initially, Zhao entered the GNSS segment as a distributor for an established brand, but he recognized that the demand could not be met domestically at the value proposition of traditional channels. He formed CHCNAV in part as an integrator (third-wave GNSS), using OEM boards from established manufacturers and developing rovers and software tailored for domestic markets.

Mao said there were only three people in the original 2003 company, but the numbers grew to 500 in 2012 and over 1,350 in 2018. The big move to an IPO in 2017 “has helped CHCNAV take operations to a new, global level. We have been successful enough to avoid having to seek large funding from banks or other institutions that might have restricted the latitude the company enjoys in innovation to spur growth.”

While CHCNAV was successful at integration, they pursued R&D from the beginning in developing their own boards, software, and hardware. This has included R&D for not only GNSS, but mobile mapping, scanning, UAV, machine control, precision agriculture, marine, etc.

Component partners in these product lines include, for example, Riegl in their mobile mapping system. They are one of the largest Z&F distributors, and they integrate OEM boards from manufacturers like NovAtel or Trimble in certain products. “When we develop something, we always benefit from an earlier and large-scale introduction with the domestic market,” said Martin. “This systematic product release process ensures that everything will work flawlessly before introducing to international markets.”

“From 2009 to 2012 was what we call the reform period,” said Mao. “We had growth of 30% to 40% per year, and our single biggest market is domestic, but we began to look outside. 2012 to 2018 was a consolidation period. To prepare for global growth we increased standards for product development, training for project managers, manufacturing, benchmarking, etc. These are essential to grow strong process roots.”

This dedication shows in their operations. I saw only the most modern of facilities, manufacturing infrastructure, testing stations, labs, and an engineering section with what looked like about 100 engineers using 3D design workstations and software. What I saw was in stark contrast to some legacy perceptions we hear about manufacturing in Asia—I saw nothing cheap or cheesy at all. 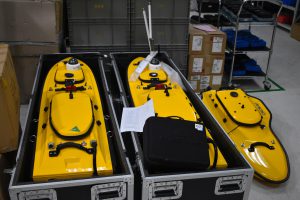 Many folks think that CHCNAV makes only GNSS rovers. During the tour I was shown more items in their portfolio: hydro boats; industrial, mapping, and surveying UAS; scanners; mobile mapping systems; surveying and RTN software; precision agriculture; and machine control. I even saw them beginning to provide surveying total stations.

While they’re guarded about exact numbers, Martin said that annual units sold is 30K to 40K (or more) and has been for each of about 15 years. That adds up to the range of perhaps half a million units moved. (Holy cow!) Mao said the current phase is consolidation. With several-hundred-thousand customers, growing service and support is key, as is expanding broader geospatial verticals like mining, monitoring, agriculture, construction, and the global regions served.

While integration (e.g. OEM GNSS boards) is the right choice for certain products and end-user needs, CHCNav’s own boards (and inertial components) are being increasingly utilized. I was given a demo of a survey rover. I had asked to see one of their entry-level rovers: the i50 that does not have all the features of their top-end models but does have their own board inside.

Connected to the local RTN, the four-constellation (GPS+GLN+GAL+BDS) solution performance was as good as any nearly any rover I’ve tried. As a bonus I saw true three-signal solutions: Beidou B1, B2, and B3 together, on top of the other three constellations. Martin and Mao also noted that the recent near-completion of the Beidou constellation and growing awareness of the advantages of multi-signal/multi-constellation solutions is good timing to raise the profile of CHCNAV in North America.

Did you know that CHCNav … ?

Liao Kai, the South Asia sales rep who goes by “Leo,” joined us on the tour and said that CHCNAV’s advantages in some aspects of Beidou have been a great asset in sales and winning tenders. An example was for a new real-time network (RTN) in Thailand for which CHCNav won all four tenders. This included 200 reference stations, 1,000 rovers, and their RTN software called CPS.

I have run an RTN before, so I asked to see it in action and noted that every essential feature I could think of was included, such as baseline and positional integrity monitoring, station control and quality, user web interface, accounts and NTRIP management, etc. Leo says they have clients running CPS networks in Bulgaria, Russia, the UK, Uganda, Kenya, India, Vietnam, Columbia, the U.S., France, and more.

They have their own UAVs (and hydro boats), including a cool, mid-sized VTOL craft. They seek to serve industrial, government, and engineering markets. I asked to contrast this with, say, Dà-Jing Innovations, or Dà-Jing as they call DJI, is viewed more as strong in the consumer space and seeking to expand into the pro-sumer space, whereas CHCAV is interested only in the industrial space. I was shown a lot of other hardware and software—their portfolio is looking like that of the big names we are more familiar with.

Their own survey software, LandStar7, looks to be complete, with roading, pipelines, etc., and can be found on Google Play Store for Android. And they have the CGO2 post-processing software. If a customer, say in North America, wants to use software that is more familiar, like MicroSurvey or Carlson, those accommodate most CHCNAV units.

I did not get to check out their total stations, but I understand that there is only a lightweight manual total station at this time.  Now that CHCNAV is developing and manufacturing many of the products in their expanding portfolio, and utilizing their own GNSS boards in some of their rovers, puts them a good position with regards to the 4th Wave of surveying, mapping, and GNSS instrumentation.

As I was touring the facility, the relative youth of the workforce was obvious. Mao said the average age is just below 30. I saw all of accouterments of a Silicon Valley tech company: ping pong, foosball, a gym, etc. I interviewed an employee: Liu Chuan Gang, assembly captain for their GNSS units. 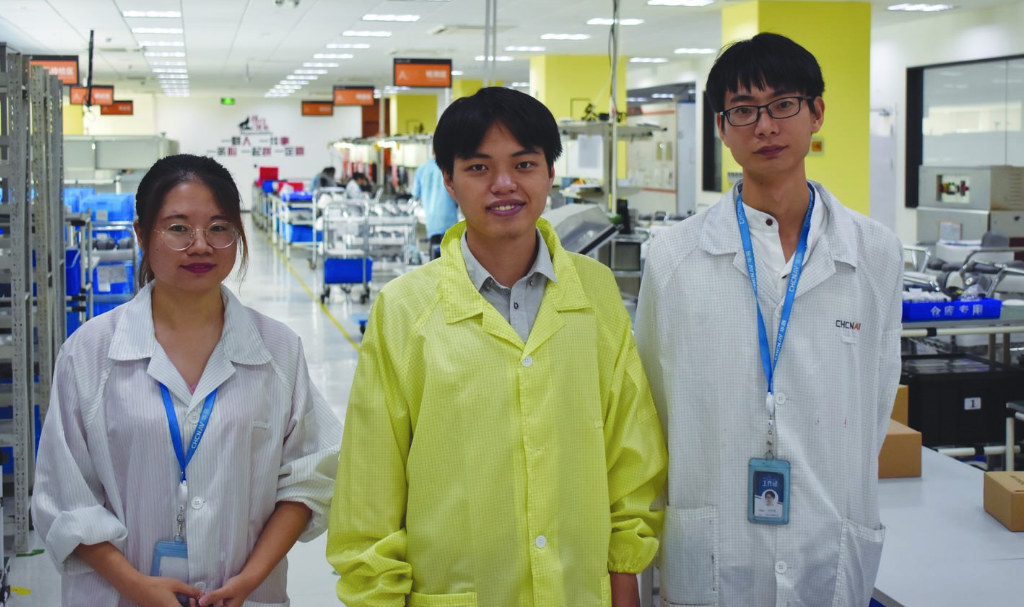 Gang has been with CHCNAV for eight years: it’s his second job since school, he previously was with an unrelated electronics manufacturing company. He said that the work at CHCNav is much higher tech than his previous work, more exacting and challenging. In his role he oversees GNSS assembly, sealing, and packaging. When asked what he likes about working at CHC, Gang said it is a friendly, almost a family atmosphere. Gang also appreciates that many steps have been implemented to avoid worker fatigue and stress.

I had heard this same reference to family when I spoke to others in the facility. The staff and managers tell me they feel they are contributing to a shared vision. Martin says that they just don’t want to be a “good #10 on the list” but aspire to be a “strong member of the top three.”

Zhao recognized that not everyone would be able to always afford high-end and that the magic of geospatial technologies should be more accessible for everyone who can reap the benefits. And many surveyors I talk to have expressed price fatigue. As one asked me, “Doesn’t tech tend to get cheaper over time as it gets better?”

This is what the fourth wave is all about: not just price wars but being able to provide innovation while not leaving anyone behind. Martin said that a bit of a CHCNAV philosophy and slogan has risen with regards to enabling all users: Bringing technology down to Earth. 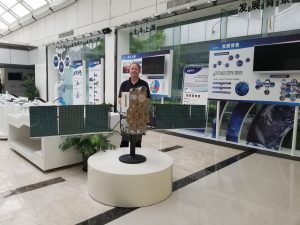 The author at the Beidou Institute (next door to CHCNAV’s HQ) with a mock-up of a Beidou global navigation system satellite .