While I was employed at Rettew Associates, Inc. in the late 1990s, I worked with a great survey technician by the name of Craig West. Craig and I got the opportunity to work together on a big boundary survey for the National Park Service along the Appalachian Trail in Maryland.

The boss sent me because I was licensed as a Property Line Surveyor in Maryland and coincidently, I had previously surveyed some of the adjoining properties for the State of Maryland, Department of General Services (DGS) when I was with Fox & Assoc. and A.E.S.I.

I was excited about going back up into the mountains where I had left my mark 10 to 15 years earlier and finding some of the old boundary marks from surveys more than a century before. Craig was not so excited as we drove down U.S. Rt. 15 to spend a week out of town, staying overnight in Harper’s Ferry, West Virginia.

He asked about the presence of snakes in those mountains. He was concerned about poisonous snakes, especially rattle­snakes. I told him there were some rattle­snakes and the occasional copperhead, but the real concern would be the bees, especially the underground nests of yellow jackets. He assured me that he was not afraid of any bees, but he wondered what we would do if the snakes were so bad that we couldn’t work. I assured him that would not be the case.

The first day the weather was rainy, so we did some reconnaissance and courthouse research. The next day was nice so we met with a very pleasant farmer named Richard Pry. He showed us some property corners around his farm and allowed us to drive up into his fields and woods roads.

When we got to the top of the moun­tain, we finally saw the Appalachian Trail. We were taping distances and finding some metal “T” bars that were set for prop­erty corners 10 years before. One of them appeared to be missing. We could find the witness blazes on the trees, but nothing was registering with the magnetic locator. Craig insisted that it had to be there. 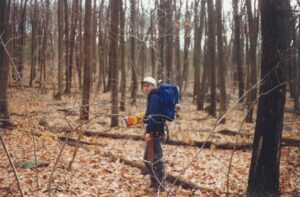 The author surveying on the Appalachian Trail in the 1980’s.

I went back to where the reel of the tape was lying, about 100 feet away, while Craig continued to sweep the area with the magnetic locator. Suddenly, I heard him cry out, “Ouch, ouch, ouch,” with each ‘ouch’ growing louder and louder. I looked toward him and through the slanting sun­light coming through the humid forest air, I could see bees flying all around him. I shouted, “Run, bees!” He ran toward me – swatting himself and yelling, “OUCH, OUCH!” Once, he fell and hit his knee on a rock and paused to look at it. While he examined the blood coming out of his knee, he slowly and more decidedly said, “ouch,” then realizing that the bees were still on him, his eyes got wide and he ran faster, yelling, “OUCH, OUCH!”

I caught up to him and started swatting the bees off of his back. I could see dozens. I yelled at him to pull his pants down so he could get the bees out of his pants. When he pulled off his shirt and pants and wiped the last of the bees off, he had more stings than I could count. I had re­ceived three stings just by trying to rid him of the stinging pests.

Some hikers came by on the trail, just as Craig was getting re-dressed. We just waved at them and wondered how much of our yelling they had heard. Imagine hiking up the trail and hearing someone yell, “Pull down your pants!”

After I asked Craig how he felt, we walked over to the trail and sat there for a minute to figure out what to do. I asked him about any previous allergies, and he said that a bee hadn’t stung him since he was in elementary school. I tried to con­vince him that we needed to leave right then, but he said that he just wanted to eat his crackers and drink some water. I warned him that his throat might swell shut or he might lose consciousness, but he said he felt fine.

I tried to make him understand that if he went into anaphylactic shock, I wouldn’t be able to carry him out of the woods and he might die before I got help to him. He did agree to quit early to get some Benadryl to stop the itching. He slept well that night after swallowing a few of those pills.

Turns out Craig wasn’t allergic to bees and he went on to do many more surveys in the woods. But his flippant non-concern about bees on the drive up that day was karma that came back to haunt—and in­jure– him. So, like all surveyors eventually do, he came to a new-found respect for bees and any creature that might impede the progress of the job.