Apportioning excess or deficiency in platted lots seems like a quick and painless solution to a problem subdivision retracement when original corner marks are not immediately apparent. In actual application, the courts generally consider apportionment a poor substitute for other methods of determining the limits of ownership.

Many factors contribute to the difficulty of refining “bright-line” standards for the correct application of apportioning, including:

The first seven items are relevant to proving the intent of the original parties. The rest may also be considered evidence of original intent via the Common Grantor Doctrine, Parol Agreement, or Practical Location. 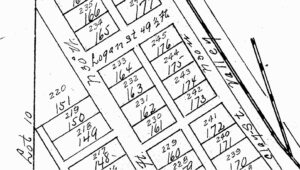 This latter group may also provide evidence of Adverse Possession, Acquiescence, or Estoppel. Where lots originating in an ancient subdivision have been occupied up to fixed and certain boundaries, the latter group of principles are more likely to prevail.

This article focuses on two decisions—from neighboring states Ohio and Indiana—to highlight the dangers of over-reliance on apportionment.

This dispute concerns lots in Davis’ Fourth Addition to the Village of Mineral City, Ohio. The map was drawn in December 1890—a partial copy of the map can be seen below. Lots west of the alley are dimensioned as 99-by-49.5 feet. Lots to the east are 92-by-49.5 feet, except for lot 242, an irregular lot with a south line dimension of 95.75 feet. Alleys and streets shown were dedicated to public use. Alleys were described as one rod wide.

The measured dimensions from the railroad on the east side to the western road was found to be between 10.5 and 12.8 feet less than indicated by the plat dimensions.

In Ohio at the time this plat was drawn, recording the plat operated to immediately dedicate streets to the municipality. As a result, the 16.5-foot alley has senior rights over the lots. Lots 161 through 164 must be treated as a single block and 173 through 176 are a separate block. Any apportionment of dimensions must be restricted to a single block of lots, allowing for the dedicated streets and alleys.

The Ohio court states well-established principles for apportioning deficiencies found in plat dimensions: “if after a tract of land has been subdivided into parts or lots, and title thereto has become vested in different persons, it is discovered that the original tract contained either more or less than the area assigned to it in a plan or prior deed, the excess should be divided among, or the deficiency borne by all of the smaller tracts or lots in proportion to their areas.”

The most critical limitation of the rule of apportionment is also highlighted: “Although it is the general rule that where land is subdivided by a plat, the shortage shall be apportioned among all of the lots, such apportionment will only be made in the absence of facts showing that equity does not require the application of a different rule.” Apportionment is also subject to other restrictions. Where there has been a prior agreement regarding boundaries or adverse possession to fixed lines, the rule does not operate.

In the present case—as is common on town lots platted decades previously—the court concluded that it was impractical to relocate all boundary lines in the subdivision because it would destabilize lots, streets, and alleys throughout the area. At least 16 other lots would have been affected by any redistribution of property rights. Since the alley was dedicated to public use prior to the sale of lots, the deficiency was borne by the lot owners.

A seemingly similar—but distinct—dispute played out in Indianapolis at the intersection of 22nd Street and North Meridian Street. East-facing buildings were constructed on the two northern parcels of the block, their locations con­sistent with the plat dimensions for 50-foot lots. The next parcel south (appellant) was described as 40 feet in width. Additional parcels to the south were not party to the litigation. While this entire block of lots originated as a single platted subdivision, some lots—including the appellant’s—were sold by metes and bounds description rather than by lot number. In addition, the block included several irregular lots, including a boundary defined by “The Old State Ditch” that existed at the time of the original subdivision.

The actual north-south measurement between 22nd Street (to the north) and McLean Place (to the south) is “short” of the record dimensions by 1.4 feet—this minor discrepancy represents the span of numerous small lots extending almost 400 feet. Parcels in this block had been occupied by various parties for at least 30 years. Buildings were constructed consistent with lines staked by various purchasers between 1900 and 1925. Despite these circumstances, the appellant demanded that the disputed lot boundaries be apportioned.

This court admits the legitimacy of the Rule of Apportionment: “where a tract of land is subdivided and is subsequently found to contain either more or less than the aggregate amount called for in the surveys of the tracts within it, the proper course is to apportion the excess or deficiency among the several tracts, 9 C. J. 295, except so far as possession has fixed the limits…” Due to long possession of several lots in this block, the last phrase of the preceding quotation is one major stumbling block to the application of the rule.

The judge also included several cautionary statements limiting its application: “…it is mere guess work to say arbitrarily that the error extended uniformly along the whole frontage, and it is a rule that is more properly prescribed by legislation…”

Another objection to apportionment in this instance should be of particular concern to land use professionals—the request by a landowner that only two lots be apportioned. The seemingly painless solution to an excess or deficiency ignores the reality that a later dispute between other property owners could result in repeated readjustment of boundary lines, destabilizing property titles along an entire block.

On the other hand, correct application of the principle would affect property rights of owners who were not party to this dispute and may not have been aware of any problem: “Its application when only one or two property owners are litigants, out of the many among whom a deficiency is distributed, must be careful in order to avoid adjudicating the rights of those not before the court.”

The court also considers complications associated with the existence of irregular/remainder lots: “A qualification of the apportionment rule is that when dimensions are given to each subdivision (lot) except one (or two), which is an irregular space, without dimensions designated, such remnant portion will bear the shortage or receive the overplus.”

An argument over proper application of the “Remnant Rule” was also discussed in this decision. This limited principle applies specifically to subdivision plats where an irregular lot is dimensioned in a manner similar to other parcels. In this case, the court cites two competing theories, both supported by case law in other states:

(1)“The appellee contends that the “Remnant Rule” is properly applied also where a tract is subdivided into lots of regular dimensions and a remnant or irregular lot or lots, all with dimensions specified on the plat, and a deficiency or excess subsequently appears; that in such case the deficiency or excess must fall on or be assigned to the irregular tract or tracts, regardless of the dimensions stated on the plat.

(2) The appellant denies the correctness of this last application of the remnant qualification of the Apportionment Rule and says that the shortage must be apportioned among all lots where the dimensions of the irregular lots as well as the regular lots are fixed in the plat.”

Both parties were actually in possession of the dimensions described in their deed. The court declined to rule on the validity of the two variants above as the solution was unnecessary to this case. The court held that long possession to recognized lines invalidated application of the Rule of Apportionment in this instance.

It is clear that the passage of time tends to make apportionment less relevant. After half a century or more has passed since the original division, subsequent development, use, and re-sale of the various original parcels often serve to fix the limits of ownership by other means. Recent subdivision requirements mandating that all lot corners be set further sideline the Apportionment Rule in favor of the recovery of original monumentation.