In a first-of-its-kind project, a UAS is tasked to collect aerial data of an international airport. 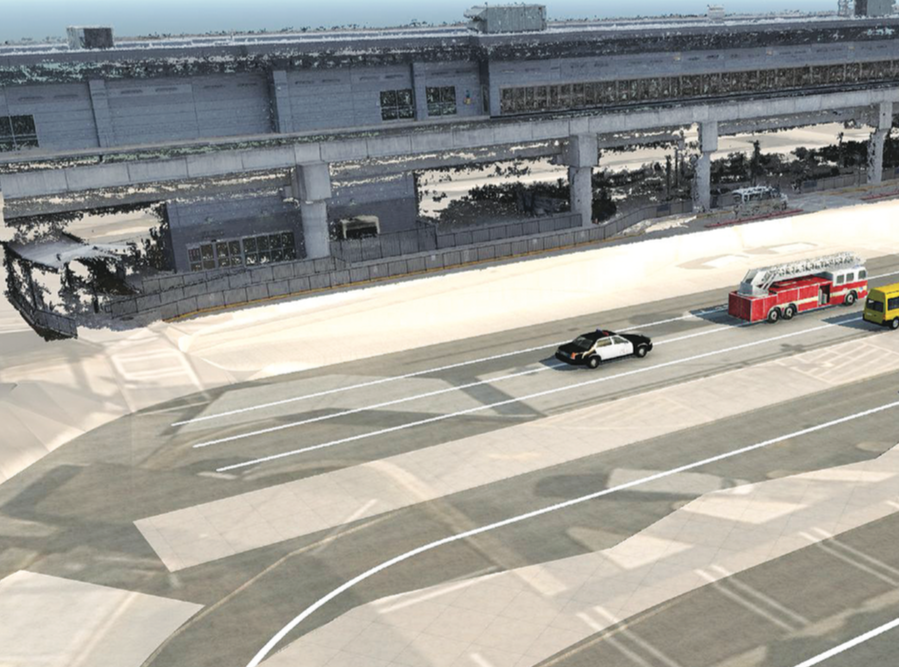 Normally when you add the words “drone” and “airport” to a sentence, it classifies as cringe-inducing. Just the opposite is true with this ground-breaking UAS project.

The Hartsfield-Jackson Atlanta International Airport in Atlanta, Georgia, usually abbreviated ATL, is the world’s busiest airport. In fact, in 2015 the airport exceeded 100 million passengers due in no small part to the role it serves as a major hub for travel throughout the southeast U.S. This growth has pushed the airport’s infrastructure to its limits.

The City of Atlanta decided to expand the airport to handle the airport’s phenomenal growth. Atkins Global, a leading civil engineering firm, was commissioned to help demolish and expand the north and south parking garages.

Atkins turned to software engineering company Autodesk and drone technology experts 3DR to coordinate a UAS flight over Atkins’ construction site. For insight into this first-of-its-kind project, xyHt reached out to Atkins, 3DR, and Autodesk. Here are their thoughts on this unique and challenging project. 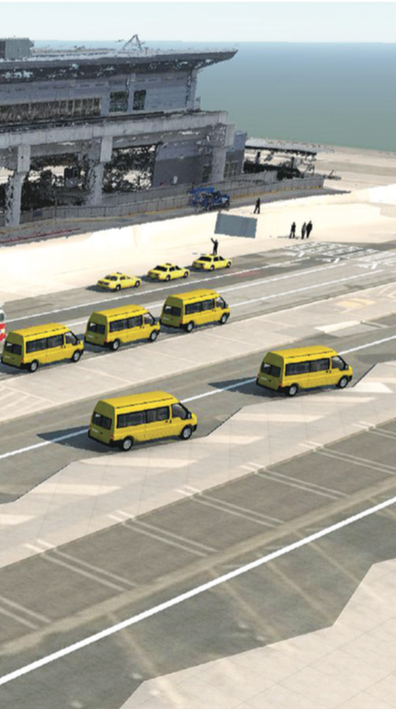 Using Autodesk design software, a 3D model of the SkyTrain Station was created from drone photographs of the Ground Transportation Center at ATL. The station can be seen in 3D in the background, with a partial rendering of a proposed new GTC in the foreground.

xyHt: Why did Atkins choose a drone to collect data for this project?

Chris Harman: We were particularly interested in leveraging 3DR’s technology because it allowed us to collect a great amount of accurate project data quickly, with no disruption to airport users.

Another advantage is the ability to capture 3D models via drone flights. You can obtain a top-down scan of the project site that includes plan images and oblique scans of adjacent structures. This provides us with a more traditional model and base image in “Plan View” (the way we usually design) as opposed to the bottom-up captures conducted from the ground.

xyHt: How did Atkins use the data that 3DR collected with its drone?

CH: Atkins took the imagery obtained from 3DR’s drone flights of the Ground Transportation Center (GTC) at ATL and used it with Autodesk design software to overlay the photographs into CAD drawings of the airport. This allowed the civil engineers and architects at Atkins to design new airport infrastructure over the latest and most accurate existing conditions.

Kevin Satori, senior product marketing manager for 3DR, provides a view of the drone-based reality capture component of the project.

xyHt: Flying near an airport, much less inside one, is on the top of the FAA’s no-fly list. Tell us about 3DR’s experience obtaining an exemption to FAA’s part 107 rule to operate in this restricted airspace.

Kevin Satori: The 3DR team used the new FAA online portal to obtain the authorization for the flight. As part of the airspace authorization process, 3DR and Atkins were able to demonstrate to the FAA that an operation in such a critical location between runways could be performed safely using Site Scan, 3DR’s autonomous aerial data capture platform.

xyHt: What was it like flying UAS missions in the busiest airport in the U.S.? What restrictions did your exemption entail?

KS: The project required preparation in advance to plan the mission. We had to make sure we respected the no-fly zone on the side of the airport buildings (we just had permission to fly on top of buildings). 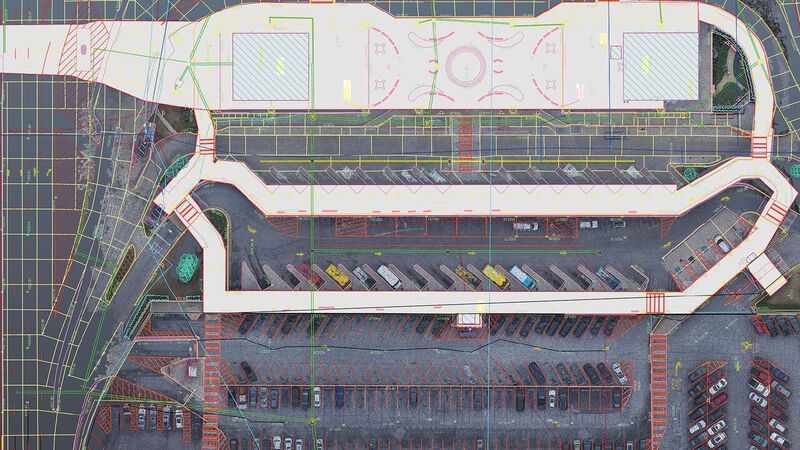 These photographs can be stitched together to create a 3D model that represents the site and can be used in design.

We also were in contact with the Atlanta Tower at all times (on the same frequency as all the other commercial aircraft landing and departing from ATL). We had to announce and ask for permission over radio for every flight.

Fun fact: the communication code name for our aircraft was “Unmanned 1.”

xyHt: Can you provide details on the UAS used in the project?

Also, Site Scan is the only drone that flies the Sony R10C camera. We worked with Sony to incorporate this camera with our drone and software. The camera has the same large 20MP image sensor and professional lenses with minimal distortion as DSLR cameras and is optimized for photogrammetry. The drone covers up to 30 acres with one flight.

The Site Scan drone is flown using the Site Scan app that runs on an iPad. During the Atlanta Airport project it was easy to select the area we wanted to fly directly on site on the iPad. The drone took off, flew the automated flight plan, captured all the pictures, and landed. Our pilots had manual control and could step in at any time during the flights. 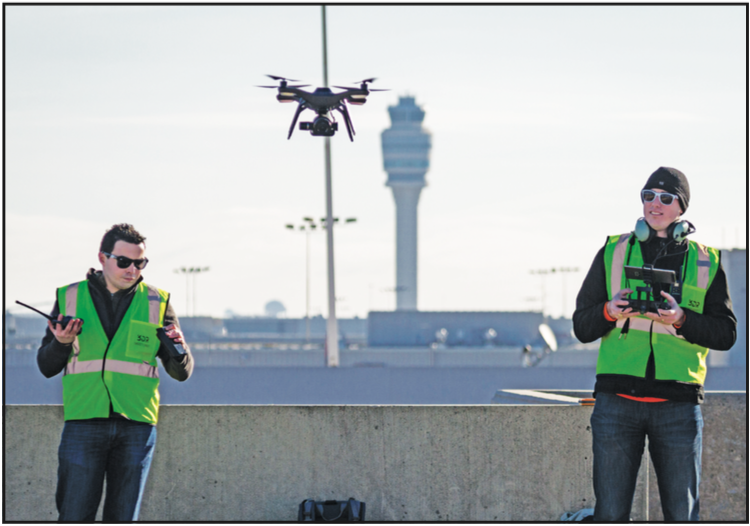 The images are geotagged on the drone and are wirelessly transferred to the tablet (no need to take the SD card out!). From the tablet the images can automatically be uploaded to the 3DR cloud, where they are stitched together into accurate 2D orthomosaics, 3D meshes, and 3D point clouds using the photogrammetry stitching engine. All the output models are in the native Autodesk formats and in industry-standard formats.

Once the data is processed, it can be managed and analyzed in the cloud using our Site Scan Manager app. Site Scan Manager allows the user to georeference models, overlay CAD and design files, and take distance and area measurements with just one click in the web app.

To summarize, the value is not in the pictures the drones takes, but in the 2D orthomosaics and 3D point clouds that Site Scan Manager generates in the cloud.

xyHt: How many flights were needed to complete the project?

KS: The team performed a total of seven flights, capturing over 700 nadir and oblique images and covering an area of 40 acres.

xyHt: Could you describe how Site Scan was used in the project, especially as the workflow was passed to Autodesk?

KS: Site Scan was used to capture the data and to process it into accurate 2D orthomosaics and 3D point clouds. 3DR offers Site Scan as a product. It’s easy to use and doesn’t require prior knowledge in drone flying. Therefore we don’t usually offer the service, but promote self-service.

In this case, the process to get the permission was new and complex for a company like Atkins doing it the first time. Also, Atkins did not have a pilot on staff. Therefore, they reach out to Autodesk and 3DR for support.

After the flight, the images are processed in the cloud. This process usually takes from 30 minutes to multiple hours, depending of the size of the project (the number of images captured). After this automated processing, the client can directly use the models. Atkins had access to all the models the day after the flights and imported them for analysis into Autodesk Civil3D.

xyHt: How is the use of UAS affecting construction surveying and BIM?

UAVs feed project teams that are starving for data. UAVs allow for frequent and up-to-date data to make better decisions on the site. It empowers better planning from the bidding phase to the completion of the project by facilitating information sharing. Site Scan brings people in the office, in the field, and the clients together.

Documentation and negotiation. Frequent data records of site conditions can be integrated directly into BIM and give companies a better way to negotiate change orders with other subcontractors. 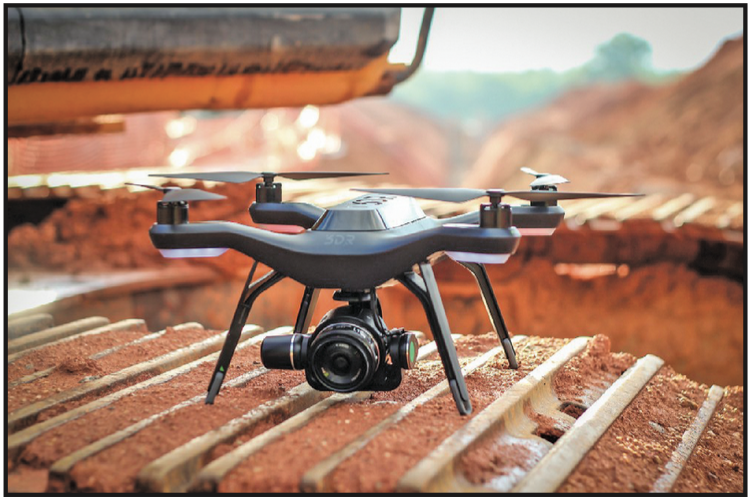 xyHt: Why use a UAS for this project instead of a ground-based 3D scanner?

Tristan Randall: Drones have several advantages over surveying equipment and laser scanners, namely that they can cover larger areas quickly and can access remote or inaccessible locations. In the case of this project, we wanted to get coverage of several areas of the airport in a window of just half a day.

Using drones allowed us to capture rich data quickly without any disruptions to airport operations. Importantly, the data may then be integrated into the construction workflow through Autodesk’s BIM 360 platform.

That said, drones are part of a holistic reality-capture toolkit. Autodesk ReCap supports working with data from any source, including drones and laser scanners. It’s all about finding the right tool for the job and then connecting that tool to Autodesk’s 3D design and engineering software to turn the data collected into a usable 3D model.

Site Scan is a unique, integrated solution in that the system is fully autonomous, from operation to data processing. Users can map an area, deploy the drone with the push of a button, and wirelessly upload the data to the Autodesk cloud to be processed, and then simply download their maps and 3D models. This is the most integrated solution on the market right now for construction customers.

xyHt: What specific Autodesk programs were used to complete this project? Can you give us a high-level view of the image processing from Site Scan to Autodesk to deliverable?

TR: Once ReCap processed the Site Scan data, we used our ReCap desktop tool to manage and analyze the data. We then imported the drone data into our engineering products, AutoCAD, and our infrastructure 3D design and engineering software, Infraworks 360, to view alongside CAD documents and 3D models.

xyHt: How were the deliverables received by Atkins?

TR: Atkins and all the project participants were very satisfied with the reality capture and 3D model creation, but there’s certainly more work to do. However, we believe they are also pleased to accomplish in hours what would have otherwise taken them days or longer.

xyHt: How is the use of UAS for data collection impacting construction surveying and BIM?

TR: Reality capture is an important component of the BIM workflow because it allows you to design in the context of the existing environment. Drones are making this process easier than ever, equipping construction professionals with a groundbreaking tool for rapidly assessing the progress of their jobsites.

Drones provide situational awareness on a construction jobsite that helps professionals make better decisions, period. Understanding what is happening on site is key for improving performance in cost, schedule, quality, and safety.

Happy Landings for a Drone Project

The fact that 3DR applied for and received an FAA exemption to fly a UAS inside an airport classifies as big news. The bigger news of this project is that it serves as a prime example of the mainstreaming of UAS-based reality capture and the benefits for businesses needing this type of data. Fast, safe, low-cost, effective, and efficient aerial data-collection is not only “here and now” but “here to stay.” For a wide array of construction, BIM, and other applications, UAS data collection is becoming the go-to technology, especially in difficult applications as shown this airport project. 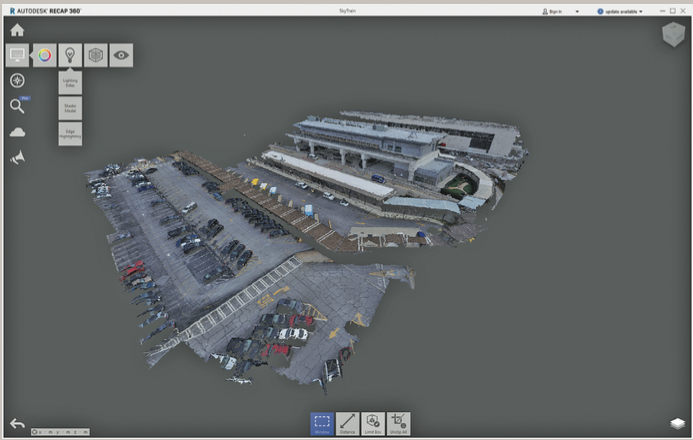