Events in 2017 demonstrated without any doubts or reservations how vitally important georeferenced aerial imagery is in assessing damage and supporting relief efforts following a natural calamity.

Last September, an impromptu consortium of companies in North America mobilized their forces and collected and analyzed mountains of data at near cost to help out in what could have been an even worse series of disasters.

In a three-week span beginning the end of August 2017, three unprecedented hurricanes hit the Gulf of Mexico and the Caribbean, Harvey, Irma, and Maria. On August 25th, Houston, the fourth-largest metro area in the US, took a direct hit from Hurricane Harvey. The storm stalled for days, and large areas were inundated. A few weeks later Hurricane Irma, a category 5 hurricane, hit landfall in Florida. Days later Hurricane Maria, also rated category 5, struck the Caribbean and is considered the worst natural disaster to have hit Puerto Rico. 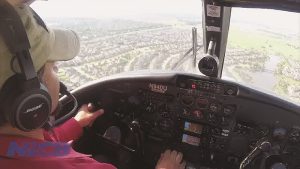 A pilot for Sanborn was among the first to examine the damage.

These were long-duration events where storm surges caused massive flood damage in the greater Houston area and several cities in Florida and the majority of the island of Puerto Rico. Thousands of buildings and homes were destroyed and hundreds of thousands of cars were ruined. More tragically, many people, pets, and livestock died.

In the US we are fortunate to have a tremendous industry of private mapping companies that were willing and able to mobilize and collect imagery over more than 24,000 square miles of affected areas. Because the collection of data would be virtually impossible on the ground, imagery taken from the sky was essential. Aerial sensors gathered and delivered detailed images and data identifying damage and crisis points to those on the ground involved with rescue and recovery work.

Typically, aerial mapping projects require weeks of planning and scheduling to mobilize the equipment and favorable weather conditions. The final products are usually delivered two to three months after acquisition. Those timelines would not be acceptable for the needs of the first responders and damage assessors. They need next-day turnaround

I am a member of an organization called MAPPS, a non-profit association of the most advanced geospatial firms in the U.S. MAPPS member firms are engaged in surveying, photogrammetry, all forms of lidar, satellite and airborne remote sensing/image processing, aerial photography, hydrography and bathymetry, GPS, GIS data-collection and analysis, consulting and data-conversion services. Our associate members include firms that provide products and services to our member firms, as well as other firms worldwide. (See center spread of this publication for a list of MAPPS member firms.) Many of the companies that belong to MAPPS were called upon to collect imagery and other geospatial data in Florida, Puerto Rico, US Virgin Islands, and Texas. The contributions of the individual companies are too many to name. Here are some of the projects that were flown. 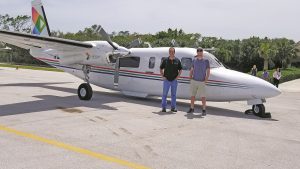 Geomni, a fairly new company formed by Verisk Analytics, provides geospatial data and imagery for insurance, financial services, energy, and other mapping industries. Geomni’s nationwide presence includes a fleet of fixed-wing aircraft that were first on the scene. The response teams were able to stage and begin data-collection flights in areas such as Corpus Christi and Rockport, Texas, even as the disaster caused by Hurricane Harvey continued to unfold. After Hurricane Irma, Geomni documented damage throughout much of Florida, capturing high-resolution imagery from millions of structures, including both commercial and residential properties.   Geomni mobilized and deployed resources to Puerto Rico, acquiring oblique and nadir imagery for the majority of major urban areas affected by the storms. The imagery and, more importantly, actionable data analytics were made available via Geomni’s online imagery viewer within 48 hours of collecting the raw data. 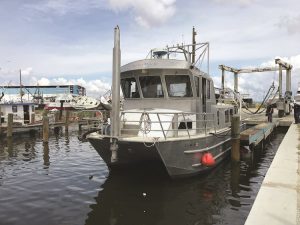 TerraSond’s survey vessel is ready for action. Note the flipped-over boats behind it.

Another MAPPS member, TerraSond, had an office in Corpus Cristy, TX. TerraSond is a hydrographic survey company. They mobilized two ships to survey all the ports and channel areas from Ingleside, TX to Rockport, TX, including Port Aransas and Aransas Pass. They surveyed the channel bathymetry so that clearance and recovery barges could be brought in to begin opening the channels and private marinas.

Surdex Corporation of Chesterfield, MO and SAM LLC. of Austin, TX both had existing contracts with clients in the hurricane regions. Each company mobilized and collected extensive amounts of imagery of the flooded areas.

EagleView Technologies, a provider of oblique aerial imagery and property analytics for the government, insurance, and commercial sectors, mobilized a fleet of nearly two- dozen aircraft to capture detailed, bird’s eye view images of Hurricane Harvey’s damage to help evacuees assess the storm’s impact on their homes. The images are available through a website that displays before-and-after images of properties throughout the affected Texas regions. Residents can enter their address on the site and view aerial photos of their property both before the storm and afterward.

In the wake of Hurricane Maria, the Puerto Rico planning board and local and federal geospatial experts were hunkered down in the Emergency Operations Center assessing the extent of damage. Early in the morning on September 27th, Merrick & Company of Greenwood Village, CO received an urgent text message from the GIS coordinator of Puerto Rico requesting all the imagery, DEM, and planimetric data that Merrick possessed because of an on-going orthophoto and cadastral project it was working on for the Municipal Revenue Collection Center (CRIM). Text messaging was used because other forms of communication were still unpredictable. 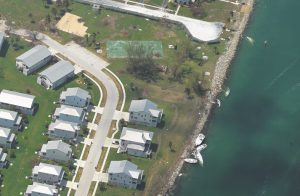 Geomni gathered images of the damage to boats off the coast of Key West, FL.

Because the CRIM office was flooded and their servers where shut down, Merrick had the only source of parcel and building data in their Colorado office. The request was simple but direct: “We need to know how many people would be impacted if the Guajacata Dam breached, and where are they located.” Although the request was relatively easy to answer using a series of GIS queries, Merrick could not release the data due to ridged confidentiality agreements signed with the CRIM. Due to communication problems, none of the CRIM management was available to obtain a release. Then Merrick received the following message: “I need the info now … everyone is without communication … dam is about to break … as the GIS Coordinator for PR I’ll assume the responsibility.” At that point, Brian Raber, Merrick’s project manager, made the decision to provide the data without having a formal release. However, within minutes prior to releasing the results of Merrick’s analysis, the CRIM project manager notified Merrick to send the data and continue to support the recovery efforts using their data.

Prior to the hurricanes, NICB, had reached out to the photogrammetric industry in the US to find solutions to obtain timely and accurate imagery over areas affected by adverse weather events and wildfires. In the summer of 2017, Ryan Bank, NICB’s manager of digital operations, gave a presentation to the MAPPS summer conference.

Those conversations lead to a relationship between NICB and Vexcel Imaging, a MAPPS member. Vexcel Imaging manufactures state-of-the art photogrammetric digital cameras. Their clients include most of the aerial companies in the world. Last summer, the conversations were about proof of concept to collect potentially large areas of aerial imagery in a rapid response environment.

Vexcel had two customers, Sanborn Mapping and Quantum Spatial, that were willing to deploy two aircraft each to Houston. All four planes were equipped with Vexcel’s Eagle digital camera that collected imagery with six-inch resolution per specifications. To be useful to NIC, however, the imagery had to be processed and distributed to the first response agencies the next day. Normally the processing of this volume of data would take a month or longer.

Both Sanborn and Quantum Spatial use Vexcel Imaging’s proprietary software, UltraMap, to process data. Normally the processing would involve creating a new digital elevation model, orthorectifying, and mosaicking the imagery to very precise accuracy standards. It was agreed that NICB would accept a preliminary product if they could deliver it in 24 hours. The imagery was radiometrically balanced to minimize the differences between exposures and mosaicked together into continuous strips. The imagery is georeferenced so that it displays correctly in GIS software. Esri was also a key partner in the NCIB team.

Esri is the industry-standard GIS platform for the viewing and analysis of the geospatial data. For imagery to be useful, it needs to be viewed with existing data such as street maps, property ownership, and jurisdictional boundaries. Esri was key to set up a common viewing interface and cloud storage to host the massive amount of imagery that was being collected.

The water from Harvey had not even begun to subside when Irma and Juliet hit Florida and the Caribbean. Quantum Spatial and Sanborn, along with GPI Geospatial, a Florida mapping company and Keystone Aerial Services, a national aerial mapping company, mobilized their resources to Florida. This event was even more challenging; many local airports were damaged and inundated with support air traffic. To meet the delivery schedules, raw data was flown directly to Sanborn’s office in Colorado.

It cannot be understated the effort required to coordinate missions of this size and schedule. All of these companies agreed to collect, process, and analyze the data meeting highly aggressive schedules, and in some cases at reduced cost. It is also important to understand that these companies usually compete for mapping projects. Their collaboration was key to the success of the acquisition missions and interoperability of the final data.

So what is driving this collaboration? It is the need of the relationship between the insurance industry and their customers (you and me) and the commitment to do the right thing in the adversity that follows a flood, a hurricane, wildfire, or any natural disaster. I don’t pretend to know what goes on in the boardroom of a major insurance company. I choose to not believe the common perception that they simply raise the rates after a major payout. I believe that they want to provide prompt and fair service to their customers, which is you and me.

They are a business that needs to manage huge unplanned payouts. An event like Harvey costs the insurance industry billions of dollars, cash that needs to be moved and managed. It is not sitting in a savings account waiting to be spent.

Having current imagery available, as well as the capacity to rapidly mobilize during an event allow the insurance company to assess damage and shorten the timeline to assist the property owner when he needs it the most. It allows organizations like Eagleview and Geomni to provide accurate and timely damage reports. It also allows an organization like NICB to weed out fraudulent claims, which sadly occur after these events.

Aerial imagery can help to balance need, response time, and accuracy of a claim when the property owners need it the most. No one company can fill the needs after a year like 2017; it takes an industry for that, and MAPPS companies demonstrated their commitment to the profession to provide the expertise and capacity to respond to these emergencies.

Image Above: Geomni gathered images of the almost-indescribable devastation in Puerto Rico.