This entry is part 70 of 80 in the series Pangaea

Here’s a great example of serendipity. Not so long ago I took a break from my daily routine and flipped on the TV. The set was tuned to the science channel, and just as the screen flickered to life I beheld the sight of the first launch of SpaceX’s Falcon Heavy as it lifted off. I watched in awe not only as the rocket soared into the heavens but also as the booster stages made their landing pads for reuse. It was just like watching science fiction. I was thinking of wrapping my head in an Ace bandage to keep it from exploding!

Naturally, when I saw the book, Rocket Billionaires: Elon Musk, Jeff Bezos, and the New Space Race, on sale I picked up a copy.

Thumbnail sketch. As you might assume, the book gives us the inside story on Bezos and Musk and their contributions to the new space race, via Blue Origin and SpaceX, respectively. Moreover, we get an overview of the past, present, and possible future of space exploration and all the major players, including United Launch Alliance (ULA, Boeing and Lockheed’s joint venture), Virgin Galactic (Richard Branson, another billionaire) and others. Apparently the author missed billionaire Paul Allen and his Stratolaunch project. (That’s okay, you read about in the last issue of Pangaea so you’re all caught up.) This book is so well written and fact-filled that I had a hard time putting it down—an observation I usually reserve for the suspense/thriller genre. 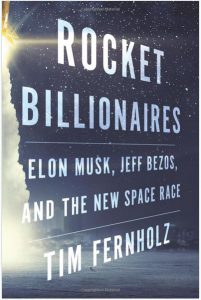 Takeaways. Bezos and Musk and their commercial space efforts have essentially re-started the space race. After the Space Shuttle program was terminated in 2011, the U.S. found itself without an in-house launch capability for major space missions. Further, NASA was hamstrung by factors both external (politics and budgeting) and internal (an overcautious attitude thanks to the Challenger disaster) that many say contributed to the moribund state of U.S. space efforts. Along comes SpaceX that proved that it could provide satellite injection at one quarter of the cost of ULA’s approach. And the race was on.

Furthermore, to re-start the space race, they had to accomplish the impossible. Private companies launching rockets into space? Not so long ago that idea would have gotten you laughed out of the offices of NASA and big military contractors. Re-using rocket boosters? The best minds in the industry said that this was either physically impossible or completely infeasible from an economic standpoint. Scoreboard says, “New Space entrepreneurs 2, experts 0”.

Why should we even care about the space race being reignited? I can think of two reasons. First, “better, cheaper, faster” satellite launches means better, cheaper, faster satellite remote sensing, which should be of interest to all in the geospatial community. Second, the creation of a future where humanity is a space-faring species ensures its survival. Saving the human race? Yes please.

Musk’s visionary plans of Mars colonization seems the stuff of dreams. Some experts are saying “impossible.” You know, like private firms using reusable rocket boosters to get into space. To be fair, Musk’s timetable is probably over-optimistic, but the critics’ take is overly negative.

I’m betting on the space cadets.