Missouri’s Meramec River is one of the largest free-flowing waterways in the state. With a source southwest of St. Louis, in Dent County, and the mouth at the Mississippi River in Arnold, some 20 miles south of St. Louis, its meandering 220 miles drain nearly 4,000 square miles in a watershed covering six Missouri counties. It is used extensively for fishing, boating, and canoeing and is surrounded by extensive hiking and biking trails.

In late April 2017, the St. Louis region experienced exceptionally heavy rains. In Sullivan, Missouri, nearly seven inches of rain fell from April 29 through May 1. Local authorities watched with concern as the rivers swelled beyond capacity. Being in such close proximity to the affected area, Surdex Corporation (in Chesterfield, Missouri), an aerial mapping company since 1954, monitored the flood waters and was able to conduct aerial imagery acquisition—despite the exceptionally cloudy and rainy conditions—to pull together a complete coverage of the flooded area for local communities and disaster recovery officials. With the projection that the flood would crest early on Wednesday, May 3, Surdex acquired aerial imagery on May 2, processed the images, and provided web services containing the orthoimagery within 24 hours.

The Meramec crested on Wednesday, May 3, at 36.52’, breaking the over-100-year record by three feet. This was preceded by a crest of 31.48’ on December 19, 2015, essentially exhibiting two nearly “100-year” floods within a 16-month period. The Meramec Caverns attraction was again closed for a period of time, along with several campgrounds, boat access areas, etc. 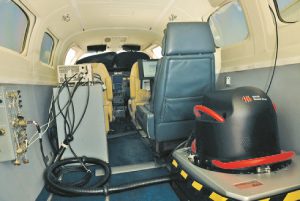 For the Meramec River effort, one of Surdex’s Leica ADS100 large-format pushbroom sensors was used to acquire the imagery. This sensor simultaneously acquires 4-bands of imagery (red, green, blue, near-infrared) from nadir, forward-looking, and aft-looking arrays. Pixels in each array are at full resolution, avoiding artifacting from pan-sharpening and providing optimal stereoscopic geometry. The pushbroom nature of the sensor provides a maximum amount of near-nadir aspect down the center of each strip, reducing the seamline effort and avoiding much of the building lean and elevated structure issues. In addition, the 20,000 pixel width (at nadir) reduces the number of swaths required to acquire large areas, optimizing acquisition times to address narrow windows afforded by the weather. The Meramec imagery was acquired at approximately 12,500’ AGL (above ground level) to achieve a resolution of 1’ (~30cm). Precision ABGPS and IMU data was acquired to both reconstruct the push-broom imagery and to provide absolute position and orientation. 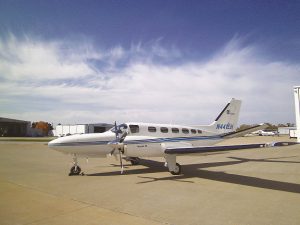 The ADS100 was hosted by one of Surdex’s Cessna 441 (Conquest) aircraft. This twin-turbine aircraft is equipped to fly up to 37,000’ and is equipped with RVSM (reduced vertical separation module) and precision radar to operate above 28,000’ in airliner airspaces. It can cruise at speeds above 300 knots with an endurance of over seven hours on a single tank of fuel. The Conquests are ideal for quickly ferrying at night to projects anywhere within the United States to acquire imagery under ideal atmospheric conditions.

In the case of the Meramec flooding, local media coverage combined with the historically problematic area was sufficient to define the area of capture. Surdex chose to acquire approximately 620 square miles of coverage, including coverage from the mouth at the Mississippi River near Arnold, Missouri out to St. Clair, Missouri. This final flight plan included eight flight lines at a resolution of 1’/30cm.

With concerns that weather, principally scattered cloud cover, would interfere with successful acquisition, Surdex determined that at least two overflights of the flight plan would be executed, with the belief that the combined acquisition would result in data largely free of cloud/cloud shadow. A mission was flown from approximately 12:00 pm to 1:30 pm and a second mission from approximately 3:30 pm to 4:30 pm. 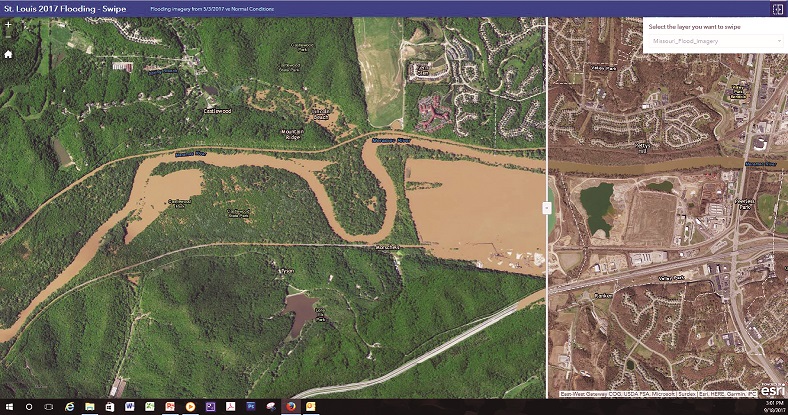 Flooding of the Meramec River west of the intersection of I-44 and Route 141.

Only raw imagery processing, aerotriangulation, and initial orthorectification were accomplished using the Leica Geosystems XPro software suite that exploits ADS100 imagery and data. All mosaicking, imagery processing, and production tiles were generated using an extensive suite of custom software developed by Surdex over the last decade. All processing is performed in a “4×12” environment (4 bands x 12 bits/pixel depth) until the final orthoimagery tiles are generated. is provides the maximum amount of latitude in radiometric balancing from both a global and localized perspective. It also supports generation of color (red, green, blue) and color infrared (near infrared, red, green) products in addition to standard 4-band data sets.

Surdex’s software creates a final mosaic in a “master tile” layout of contiguous tiles covering a project area. Custom software can then be used for final product deliverables such as:

A “relative aerotriangulation” is performed with absolute position solely relying upon ABGPS and IMU data. e relative adjustment reduces strip-to-strip shear during orthorectification, and this relatively short task in the overall timeline ensures a good quality product for even expedited projects. For detailed analysis at a later date, control points can be introduced into the solution, and orthorectification, mosaicking, and balancing repeated to achieve more-traditional production quality standards.

Owing to the necessity of rapid delivery during a disaster, only existing elevation data (lidar, USGS NED, local data, etc.) is used for orthorectification with no effort at updating the data. For the Meramec River project, Surdex used the USGS National Elevation Dataset (NED). is means elevated structures such as bridges and overpasses may exhibit layover and/or smearing since localized elevation models are not employed as on a typical project. However, the pushbroom aspect of the ADS100 ensures the maximum amount of near-nadir aspect during acquisition, minimizing the distortion of elevated features.

For expedited projects, generally only minor editing of automated seamlines by technicians is performed in order to reduce the timeline. Surdex uses a custom automated seamline generation tool to generate initial seamlines. However, in the case of cloud and cloud shadow cover for the Meramec situation, Surdex technicians had to selectively use imagery from each of the two acquisition missions to maximize clear imagery. This was guided by a delineation of cloud cover during imagery inspection.

Surdex has developed a vast array of tools to address global balancing of the final orthoimagery. Using what-you-see-is-whatyou- get (WYSIWYG) prototyping in the company’s specialized tools, the distributed processing environment ensures high quality results–even for expedited projects. Radiometric balancing and “colorimetry” (tone, brightness, contrast, etc.) were based on image metrics employed on all projects and the expertise of highly skilled image processing technicians.

An online image server allowed users to see an area prior to the flooding and during flood conditions to reveal the extent of the damage.

Until five to seven years ago, dissemination of emergency response data relied on “tennis shoe” delivery of hard drives to the users. However, the proliferation of high bandwidth internet connectivity and standards for web hosting of geospatial data has made this step considerably quicker and easier:

By adhering to protocols such as WMS (Web Map Service) and OGC (Open GIS Consortium) for image services, a number of exploitation uses are accommodated for users with varying levels of geospatial awareness and tools:

Of particular benefit is the use of previous imagery and/or geospatial data to present a before—and after—view of the flood. For example, other image layers can be “swiped” against the disaster imagery using a slider to expose imagery prior to the flood to examine the extent of damage. This presentation of the data is a simple, but powerful, means for characterizing the situation.

Surdex exposed an image service that was used by Esri to add to their ArcGIS Online service and also employed two additional web services that were distributed to anticipated users and news media outlets.

The timeline achieved by Surdex was exemplary. The projected flood crest was the early morning hours of Wednesday, May 3. This was accomplished by both good planning and a workforce willing to work the extra hours to achieve the 24 hour timeline from completion of acquisition.