This entry is part 11 of 12 in the series xyHt in print May 2016
Above: High-definition mapping sensors (lidar, digital, and oblique imagery, here mounted on a helicopter during collection of an autonomous vehicle mapping project) provide an accurate, cost-effective approach to limit the interference and potential delays related to collecting extensive control on a right of way.

A hybrid of geospatial technologies could help autonomous vehicle mapping drive us into a safer, more cost-effective, and fuel-efficient future.

Self-driving cars are fast becoming a reality; it’s estimated that by 2020, there will be around 10 million self-driving cars on the road. Their benefits will be immense—studies indicate that self-driving cars will significantly reduce traffic deaths, road congestion, and fuel consumption.

Companies such as Mercedes, BMW, and Tesla have or will soon release cars with self-driving features. Google currently has an entire fleet of autonomous vehicles, including golf carts and Toyota Priuses that have logged almost 900,000 miles driving in cities, on busy highways, and on mountainous roads around California.

Autonomous vehicles rely on detailed mapping data to properly operate in their environment, which is provided by us, the mapping profession. Different car manufacturers use a different array of technology to make their cars operate autonomously. Many of the autonomous cars currently being developed use lidar, GPS, inertial measurement units (IMU), radar, cameras, and wheel encoders (similar to a distance measurement instrument on a mobile mapping system). 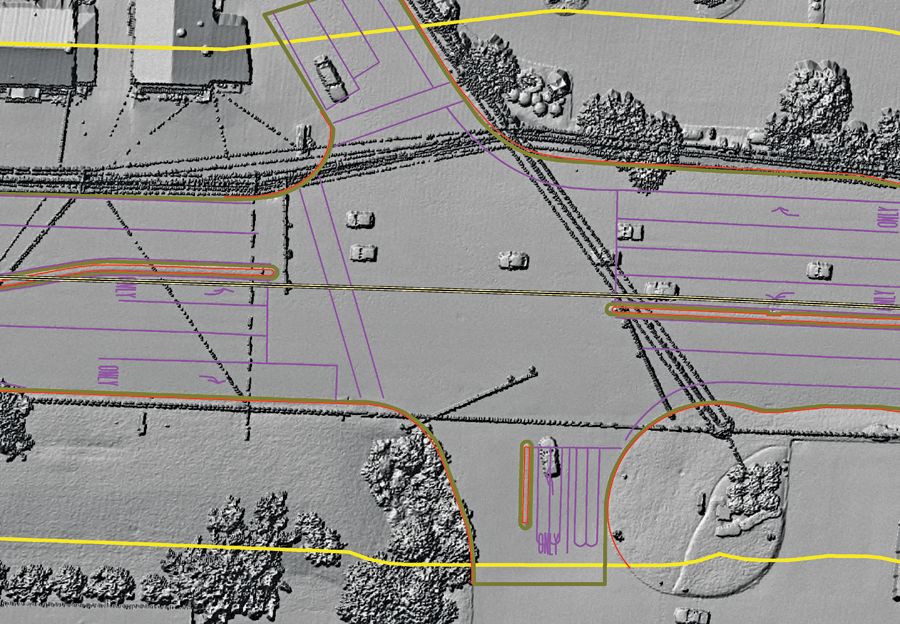 Although these technologies provide most of the necessary information for autonomous cars, it is critical for the car to gather information from the learned environment so that the car can get smarter about driving. Currently, the car learns from the environment by driving a road once and then applying what it learned about that drive the next time it drives the same road.

Several car companies have earmarked millions of dollars for autonomous vehicle mapping, most of this using mobile mapping technology. This technology consists of using mobile lidar, GPS, IMU, and 360-degree video. The question is: Is this the best technology for the application? Mobile provides a detailed solution, but it relies on extensive control to get the required accuracies for this application.

For autonomous vehicle mapping, the data is divided by sections of roads, and the positional data is subject to GPS gaps or degraded data when the POS solution is processed. This forces the need for extensive survey to get 2-3 centimeters of vertical accuracy consistently. For example, in a 40-mile project, the mobile data would need to be tied to approximately 60 very accurate survey points.

Additionally, in some locations there is extensive permitting required to get access to the right-of-way from the departments of transportation in heavily populated urbanized locations.

What is the alternative? A hybrid approach helps alleviate the need for extensive control and, in most cases, provides a more cost-effective approach to this application.

Hybrid mapping uses a combination of mapping technologies to provide the most viable solution for a given mapping project or data-collection process. The hybrid mapping approach for autonomous vehicle application varies but is similar to what would be used on a positive train control (PTC) project or highway safety project.

For example, airborne lidar, in addition to imagery collected from high-definition mapping sensors (HDMS), provides an accurate, cost-effective approach to limit the interference and potential delays related to collecting extensive control on a right of way. This data, in combination with the mobile data (or, potentially, in the absence of mobile data) should provide the required information.

This approach typically can be more cost-effective than mobile alone. For example, Caltrans requires permits at a significant cost and time lag to get access to their right of way, and typically any activity that requires permitting requires a lane closure company, so HDMS is a viable alternative.

Mobile lidar may still be required for the project, but it can be tied to the HDMS data set. Typical HDMS systems can achieve accuracies of 2 to 3 centimeters vertically and 13 centimeters horizontally, roughly. The required control to achieve this with a mobile sensor is debatable, but it is at a significant cost depending on the approach.

The continuous trajectory solution provided by HDMS provides the necessary basis for an accurate base lidar data set as a reference, with far less required control. The processing of the positional data (IMU, GPS) is absent from the typical brakes in the POS dataset that could be present in a mobile dataset, such as elevation masking, cycle slips, and lock loss.

This doesn’t mean that the solution from a MMS POS solution is bad, because the addition of DMI, second GPS antenna (in most cases), and the algorithms can be used to process the data. There are arguments for all technologies based on who owns what.

I mean to present a potential viable solution to the typical technologies used for this application and to provide options when the collection environment provides additional extensive challenges that would make the project not viable based on time and budget. Once the HDMS data is collected, a transformation can be computed based on tie points between the airborne solution and the mobile solution, yielding an accurate data set.

Most data representing the real-time environment surrounding the car is detailed and comprehensive. This begs the question, Does the base information used need to be as detailed as the real-time data? Why or why not? Does the hybrid approach provide the necessary information? Does using a different approach than the almost-universal use of mobile mapping sensors provide enough information?

Right now, a significant number of autonomous vehicle mapping projects are being conducted all over the world, and research would indicate that the requirements vary significantly by car manufacturer. It would be reasonable to state that a dataset of 65 to 150 points per meter—in conjunction with the right additional hybrid data such as 360 video, HD video, and other types of imagery—may suffice for this application.

Also, the thousands of points from mobile lidar provide a very good solution for this application, but is the extensive survey needed? Where is the line for return on investment? At what point does too much data become too much? At what point does the cost of those points drive a solution to be created that gives the user the right amount of data to address all the requirements?