Inside the unique design of the Falcon 8

I must confess a little bit of UAS fatigue. Among the flood of new UAS, it takes a bit of research to find distinguishing features. It does make sense at one level that a basic form might evolve from so many parallel development efforts, but it makes one wonder if (for expedience of getting UAS to market) there might be a tendency to simply copy the norm.

We’ve drilled down deeper into the details of UAS form and design considerations.  For example, the Falcon 8, which has been on the market for four years from the developer Ascending Technologies (in UAS for over 12 years), has now been released in the U.S. under the Topcon banner (who have added integration elements). The Falcon 8 does not look like the standard rotor UAS—but why? 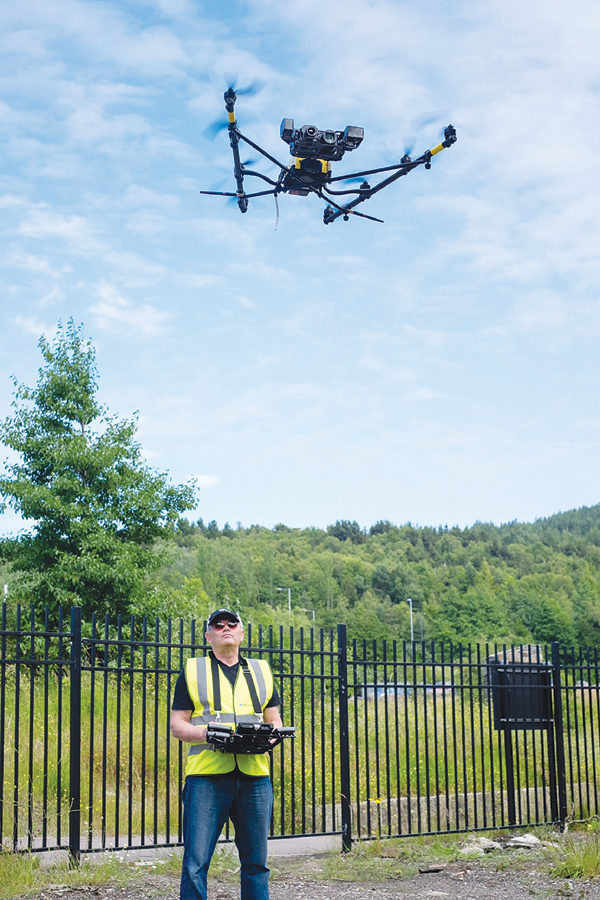 There is more than a decade of development behind this commercial UAS—and the distinctive (and patented) “open V” shaped airframe. I’d like to emphasize the term “commercial” as there is a myth that folks can perform mission-critical work with $500 catalogue hobby drones. A serious UAS will cost about as much as a total station.

If someone is going to have to shut down an entire oil rig or construction site to inspect or map, they will want to reduce downtime and use something with reliable stability and the ability to quickly work in rough conditions. In many ways, activities like structural monitoring represent the greatest challenges for UAS. If it can handle that, then other mapping tasks are a snap by comparison.

The open-V shape of the Falcon 8 accommodates interchangeable camera/sensor payloads but also is part of the overall “adaptive flight control for center-of-gravity compensation.” The eight rotors spin in alternating directions: two on each side clockwise, with two on both sides counter-clockwise. Rotor speed is controlled (for pitch, yaw, and roll) by three separate flight controllers.

We asked Topcon’s Dave Henderson for details. “Each controller on the Falcon has three IMUs (gyros), three accelerometers, and three magnetometers (compass), plus one barometric sensor: 10 sensors for each controller,” says Henderson. “Add the GPS, and you have 31 sensors constantly checking against each other.” This all serves the goal of stability that Ascending Technologies has been perfecting for over a decade.

For mapping and topo flights, the Falcon 8 can cover an area of various shapes the equivalent of approximately 900’ wide by half-a-mile long (about 50 acres) during a typical 12-minute flight. The camera/sensor packages can view from straight down to forward and straight up (hence its strength for inspection customers). Both mapping and inspection camera/sensor payloads are offered (e.g. camera and infrared for inspection), but the craft can handle others (and more are in the works).

Flight control is automated (with manual override for special tasks and safety). Wind is compensated at up to 28 mph (n GPS guided mode or up to 35 mph in a height maintenance mode.

While the Falcon 8 has had great success in other parts of the world, it is new to the U.S., and we hope to run a case study in coming months. When it comes to designing UAS, it seems that Ascending Technologies has long since discovered that the flying part is easy, but flying with purpose requires serious design considerations.