The demise of a great mapping platform

With the advent and adoption of new technologies, we are quick to forget about the old ways we used to do things. In the case of pocket calculators or disposable cameras is not relevant to reminisce about the past, but when the time comes to dispose of a great aircraft that has reached its potential, the heart shrinks and the memories abound.

Last year we had to make the difficult decision to sell one of our Cessna Citation aircrafts, N26621, built in 1989 and converted to a mapping platform in 2016 by adding five PhaseOne iXU cameras and a Navcom geodetic receiver and antenna.

N26621 was part of a fleet that the Customs and Border Patrol Agency was retiring and were not airworthy at the time. Sensitive equipment was removed, including over 350 pounds of sensing gear on the nose and lots of screens and gauges from the cockpit.

Placing the aircraft back to work was a labor of love, starting with the mandatory inspections, then the repairs and finally the avionics upgrade, including two Garmin 750. For five years N26621 gave us great performance but the time had come to retire it.

We placed the aircraft for sale and in a matter of days, we received a good offer from an air ambulance company in Chile and in two weeks, the deal was done. The owner of the Chilean company hired me to arrange an international ferry permit with the Federal Aviation Administration (FAA) and gave me the responsibility of flying it myself.

My certifications for the Citation II are limited to second in command, so I scrambled to secure a pilot, while dealing with the paperwork for the ferry permit.

I had flown many mapping missions with N26621 and always enjoyed the powerful engines and ability to recover from difficult turns when changing directions in photogrammetry grids. But I had never flown the aircraft purely for transportation or for long distances.

An international ferry permit issued by the FAA only authorizes flights over the national airspace of the U.S., but the agency requires an authorization from each air navigation service provider from every country we were planning to fly over. This meant we had to obtain overflight permits from Cuba, Jamaica, Panama, Colombia, Ecuador, Peru, and Chile.

This was a bureaucratic nightmare, to put it mildly, since some of these countries only issue overflight permits with validities ranging from 24 hours to 72 hours, depending on the aircraft and flight route.

Further complicating the logistics, the aircraft was plagued with small issues that needed to be resolved before taking off from Conroe, Texas, and N26621 was not certified to fly over 28,000 feet. So we had to prepare a flight plan that included may fueling stops in different countries in the middle of a worldwide pandemic. In order to be fuel efficient, jet engines need to operate between 35,000 and 45,000 feet.

One thing was for sure, we did not want to spend a night in any of these countries unless it was absolutely necessary. But the flight plan was giving us a flying time of 15 hours, which grossly exceeds a safe duty time. 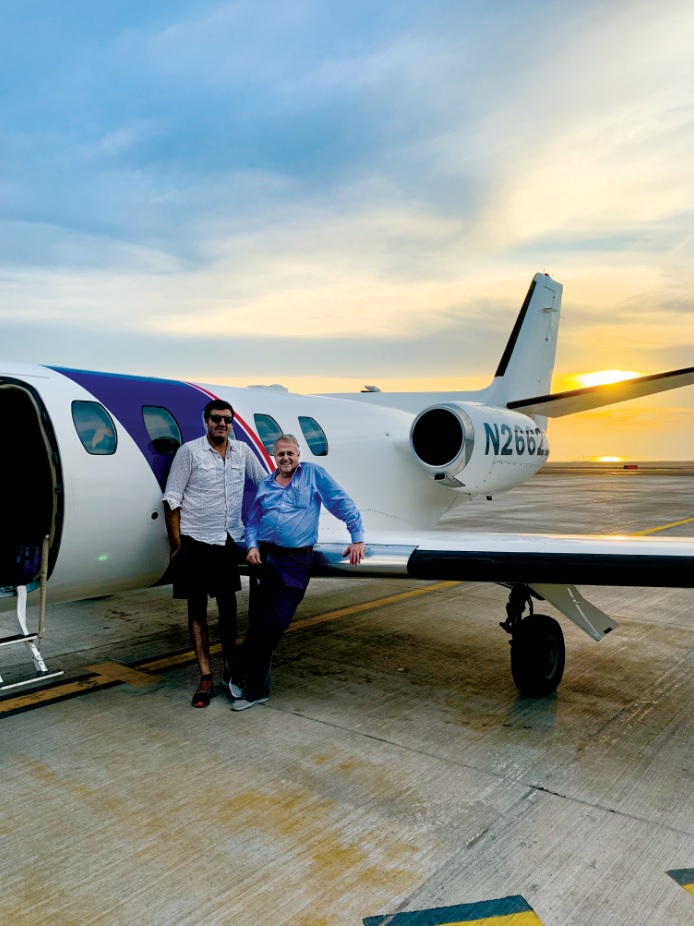 The physical inspection by the FAA was scheduled for March 10 and we were running out of time to find a pilot, so we reached out to the buyer in Chile and shared our difficulties. His response was not to worry, he would send his chief pilot, Anibal, the next day, so we could make the flight together. He assured me that Anibal knew the route and had done this same flight dozens of times in different aircraft.

The FAA inspection went well, and on March 10 we received our ferry permit valid for 10 days. Now the race was on to finish fixing the mechanical issues and fine tune the route to make sure we could do the flight in the allotted time. International ferry permits issued by the FAA and originating, but not ending, in the U.S. have a few interesting details, one of them is that they authorize the crew of a non-airworthy aircraft to fly in the national airspace using a predetermined route on specific dates and finally authorizing the departure from an authorized airport on an international flight plan. After that it is up to the different air navigation service providers to keep track of the flight.

Anibal arrived in Conroe on March 11, and we had a meeting with the mechanics to determine the feasibility of taking off from Conroe on the next day. They were having problems with pressurization but assured us the plane would be ready on time.

Anibal and I reviewed the issue of duty time and decided to schedule a replacement crew to be ready at the Arica Airport in Chile, to relieve us and do the last leg.

The next day, once all issues were resolved, we took off on our first leg to Ft. Lauderdale Executive Airport where we would do our customs and immigration for an international departure.

Unfortunately, as soon as we took off and changed our frequency to Houston Departure, we were notified by air traffic control that they were not receiving our Mode C transponder. We reset the brakers and checked every possible scenario, but eventually requested vectors for our return to Conroe.

Thankfully, the mechanics were monitoring the departure frequency and knew that we were coming back, so as soon as we parked on their ramp, they began troubleshooting and eventually late in the afternoon the issue was resolved. It was too late to start the three-hour flight, not wanting to fly at night. Normally the FAA issues ferry permits for non-airworthy aircraft for day flights, and in visual conditions.

The next day we took off early and this time Mode C worked, so we began our climb. As soon as we reached 18,000 feet there was a pressurization alarm, but we engaged the second air cycle machine, and the emergency was resolved. We landed in Ft. Lauderdale at noon and decided to ask the local fixed-base operator to have a look at the pressurization system.

Unfortunately the mechanics at Fort Lauderdale’s executive airport determined that parts were needed and the continuation of our flight was delayed another five days. During the off time in Ft. Lauderdale, all international ferry permits expired and had to be renewed on time for our departure.

At 5:30 a.m. on March 18 we took off and arrived in Panama City almost four hours later. The refueling only took 45 minutes and before noon, we were in the air again on our way to Guayaquil, Ecuador.

Panama City to Guayaquil was the shortest leg, just two hours and 20 minutes of flight time, but the one with potential weather conditions on arrival. As forecasted, we had low ceilings and steady precipitation with visibility less than 10 miles, so we executed the area navigation approach to runway 03. Once again, the turnaround time was 45 minutes, and in the early hours of the afternoon, we took off for Arica, a city in the northern tip of Chile.

Taking off from the Guayaquil airport reminded me of a mapping mission in Northern Mexico with N26621 in which the last line of the grid was the international border with the United States. We had to communicate with the Mexican air traffic control in one direction and then change radio channels to coordinate our next flight path with American air traffic control. Flying with one wing in Mexican territory and the other over the U.S. is a challenging prospect but, our faithful Citation handled it very well, and both air traffic controllers knew and respected our job. 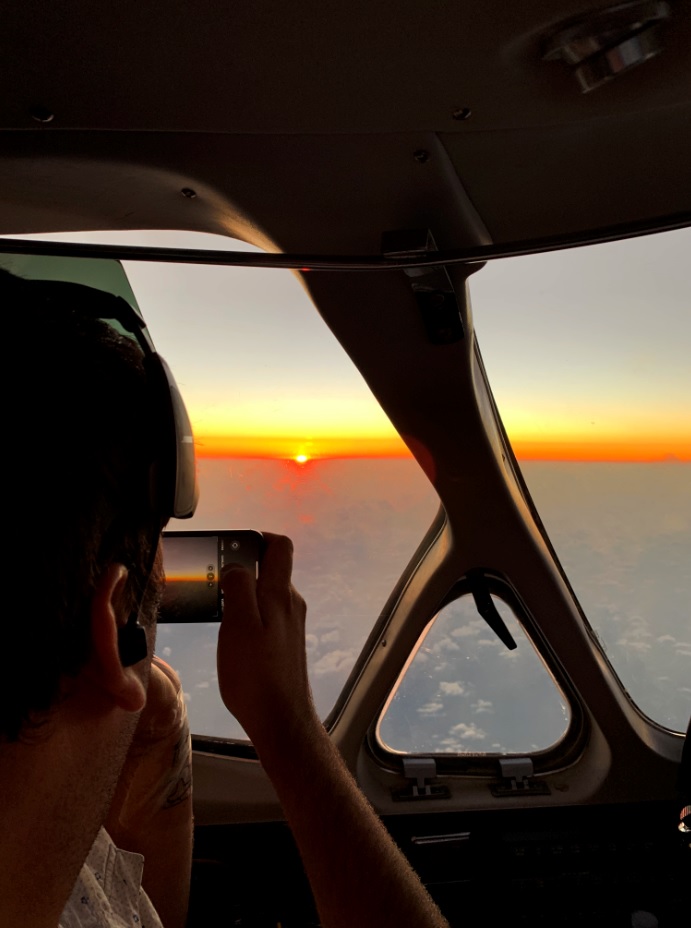 Watching the sunrise over the Caribbean Ocean on our first leg to Panama City.

I woke up from my reminiscing daydreaming because as soon as we reached our cruise altitude of 28,000 feet, we had the second emergency of the week. The altitude indicator on the pilot side went crazy and began showing a steep climb which the autopilot tried to counter by a strong push downwards. Anibal promptly disconnected the auto pilot and instructed me to recycle the breakers associated with the altitude indicator and vertical speed. For a few seconds while the system reset itself, we flew manually, hoping that the gauge would return to normal, which it did in less than a minute.

This was by far the most challenging leg and lengthiest of the journey. The distance and potential deviations presented a threat to our ability to reach Arica without an unplanned stop somewhere in Peru. So we flew using the best distance-to-fuel ratio and with the help of the Peruvian air traffic controllers, managed to land in Arica, at the border with Peru, at 6 p.m. with 45 minutes of reserve. The shortcuts and lack of deviations allowed us to complete the flight in a little more than three-and-a-half hours.

That leg was the last for Anibal and I and the replacement crew took over the flight after Chilean customs and immigration, plus a COVID-19 protocol for international crews.

The last flight of N26621 took place at night under the watchful eye of the Chilean air traffic controllers who were aware of the status of our aircraft.

The final resting place for this great working aircraft is a hangar in Santiago de Chile where the aircraft will be used for parts and the engines installed in another Citation II. It was an adventure full of obstacles and a couple of emergencies but a great learning experience.

A great mapping platform is finally resting and its parts will be helping other Citation aircraft fly sick people in a country ravaged by the COVID 19 pandemic.