This entry is part 60 of 80 in the series Pangaea

As noted in our latest issue about tethered drones, the ability to power UAS from the ground exponentially increases flight times and allows the use of heavier sensor payloads. Tethering accomplishes this at the cost of range, however: generally 200-400’ with commercially available tethering systems.

What if a system had the advantages of tethering and a range that could be extended to miles?

Enter power beaming. LaserMotive is a Seattle-based company developing wireless power-delivery systems using laser beams to transmit electricity sans wires. One of the firm’s directions is to create a laser-powered system for the UAS market. In 2012, the company demonstrated laser power-beaming indoors for 48 hours on Lockheed Martin Skunk Works Stalker small UAS, a duration of 24 times the unit’s OEM battery life. The company has a white paper on their website (PDF) that details how laser power can be used for powering UAS. 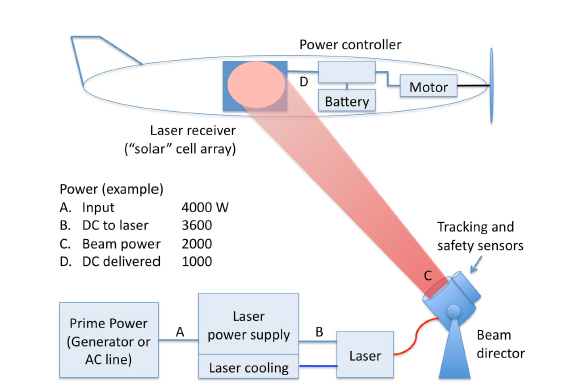 A schematic of LaserMotive’s system is above. In operation, a laser-powered UAS could operate in three modes:

LaserMotive is not just another flashinthe pan. Founded in 2007, the firm quickly went on to win the $900,000 NASA Power Beaming Challenge in 2009. In April of this year, LaserMotive raised more than $1.5 million in an equity offering. Looks like a company and a technology to watch!