A Canadian archaeologist is using advanced mapping and visualization technologies to bring one of the earliest European settlements in North America back to life. Dr. Jonathan Fowler combined a centuries-old map with a modern 3D terrain model to portray Fort Anne and its surrounding in stunning detail – just as the Nova Scotia site looked in 1706. 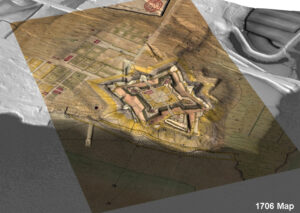 “Airborne lidar has become a powerful tool for archaeologists to tell the stories about our heritage while also providing historical information for us to study and interpret,” said Fowler, an associate professor of archaeology at Saint Mary’s University in Halifax.

Fort Anne is remarkably well preserved considering its age and violent history. In 1605, French explorers set up a fur trading post on the Annapolis River in an area they named Acadia, part of present-day Nova Scotia. France began building a “Vauban-style” star fort there in 1702.

The area experienced numerous attacks and sieges from different enemies – including pirates – and changed hands several times. Fort Anne fell to the British in 1710 and later played an important role in the Acadian Deportation.

To create the 3D map of Fort Anne, Fowler loaded airborne lidar data into the Surfer package to generate a ‘bare Earth’ terrain model depicting the topography of the area as it exists today, minus vegetation and buildings. Fowler exaggerated the lidar elevation values slightly to emphasize relief.

Next, the archaeologist obtained a digitized version of a 1706 military map from France’s National Archives showing the fort and nearby town. He overlaid the digital map on the terrain model in Surfer to create a realistic 3D view of Fort Anne shortly after its construction. Fowler repeated the process using a 1753 map from the Library of Congress to depict the site under British rule.

“The 3D map reveals the original layout of buildings within the ramparts and outside the walls in the little town,” said Fowler. “Interestingly, most of the fort’s buildings no longer exist, but some structures still stand today in [the town of] Annapolis Royal and are among the oldest buildings in Canada.”

Detailed interpretation of the 3D model has just begun, and Fowler believes previously unknown facts about Fort Anne and the surrounding landscape may soon be revealed. For example, the terrain data marks several dirt mounds outside the ramparts that could be man-made siege works and encampments built by attacking forces.

There are also many 17th and 18th century Acadian villages trapped underground in the area. As he has in the past, Fowler might use the lidar-based 3D surface map as a guide to return with Ground Penetrating Radar and investigate what remains hidden beneath the soil in and around this historic landscape.

Canada preserved Fort Anne as its first National Historic Site in 1921. The fort’s full story was published by Parks Canada.

For more information on Dr. Fowler’s research at Fort Anne, read his articles on LinkedIn and Facebook.