This entry is part 26 of 80 in the series Pangaea

To round up this short series on low-cost approaches to aerial archeology surveying, we’ll look at an even lower-cost sensor technology that can be used in certain types of archeological projects. In the first part of this series we talked about how new, affordable multispectral sensors are being used with (relatively) inexpensive UAS to find evidence of underground structures and are yielding significant archeological finds. In the $3,500 to $4,900 range, these sensors are an affordable alternative to the higher-end sensors commonly employed on manned aircraft and afford cash-strapped archeologists a way to manage small-scale surveys without breaking the bank.

I’ve seen another technique that’s appropriate for projects seeking evidence of metallic objects (naturally this precludes archeological surveys in search of older, pre-Iron Age civilizations). This technique uses thermal sensors to detect subsurface metallic objects—in many cases up to 6’ in depth depending on the size of the object. The trick is to fly night missions with thermal imaging sensors to survey the site in question. Subsurface metallic objects retain heat at the higher level than the surrounding earth. These objects show up prominently on thermal imaging at night when these heat differentials are most pronounced. Not surprisingly, this technique is being used for treasure hunting, as well.

Before we look at sensors, we should take a look at UAS night flights. Currently the flying of a UAS at night is prohibited under Part 107 of the FAA’s rules concerning commercial UAS operations. However, the rules do make allowance for night flights under the Part 107 waiver process. Drone attorney Jonathan Rupprecht has put together a great resource for obtaining a waiver for UAS night operations. This article covers the ins and outs of night operations and the waiver process, including ideas for night missions (beyond archeology) that you may not have considered. 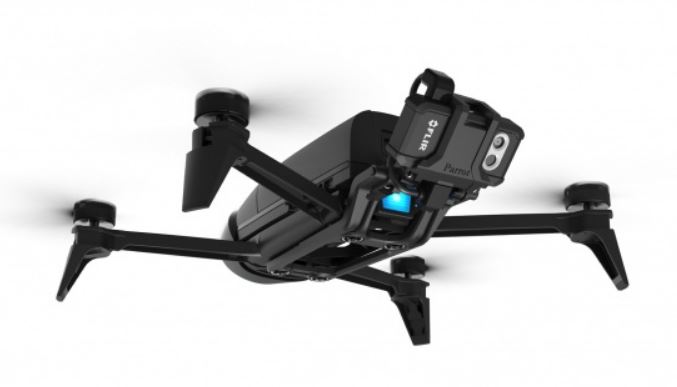 Until just recently, putting a FLIR (forward looking, infrared) sensor on a UAS was an expensive proposition. For example, DJI has recently introduced its Zenmuse XT2 line of FLIR-based cameras. Prices, for the sensor only, start just under $8K and top out at over $12K. While these are actually a pretty good value, Parrot has just blown out the bottom end with its new Parrot Bebop-Pro Thermal going for $1,500 for the UAS and the FLIR sensor. At that price you get the drone, two cameras (one FLIR, one 14 MP HD), the controller, three batteries, the FreeFlight thermal app, and a backpack.