In 2008, Alaska had never been mapped at any scale to National Map Accuracy Standards, and it was the only state with no statewide orthophotos. Dewberry (a national geospatial company headquartered in Virginia) had written the National Height Modernization Study: Report to Congress on how to modernize the National Height System, so they explained that an accurate digital elevation model (DEM) must first be produced as the foundational layer before producing other mapping layers.

Because Dewberry specializes in comparing the strengths and weaknesses of competing technologies, the State of Alaska contracted with them in 2008 to prepare the Alaska DEM Whitepaper to identify mapping problems and to propose solutions.

Furthermore, Alaska has few roads statewide, and most villages can be reached only by small aircraft that are not powered to fly over mountains; instead they must fly through valleys.

When skies are clear in daylight, there are few problems flying by visual flight rules. However, when it is dark, cloudy, or foggy (common in Alaska’s valleys), pilots navigate by instrument flight rules, which can be dangerous if instruments rely on inaccurate data to show where the mountains are.

Dewberry learned that Alaska had an exceptionally high rate of aviation accidents, and, by November of 2008, the Federal Aviation Administration (FAA) would soon be in violation of requirements of the International Civil Aviation Organization (ICAO) by not satisfying mandates for the Electronic Terrain and Obstacle Database that required DEMs with 20-foot contour accuracy for commercial overflights. 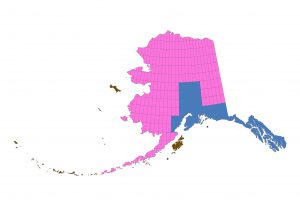 In September of 2008, Dewberry presented the Alaska DEM Whitepaper to the National Digital Elevation Program (NDEP) and National Digital Orthophoto Program (NDOP) members in Anchorage. Dewberry’s presentation was based on three consensus points, agreed to unanimously by all NDEP/NDOP members:

Using multiple bands, P-band IFSAR would be best for mapping rugged, densely forested terrain, and less-expensive X-band IFSAR would be ideal for mapping simpler areas. Prism reflectors would need to be strategically placed and GPS-surveyed to control the IFSAR mapping, and QA/QC checkpoints would need to be GPS-surveyed by geodetic surveyors using helicopters to access remote areas and dropping fuel bladders in preselected locations for refueling.

Alaska then used USGS’ Geospatial Products and Services Contract (GPSC) to task Dewberry to estimate costs, seek funding partners, and manage the Alaska IFSAR Mapping Program. In May of 2009, by a USGS GPSC task order, Dewberry published the Alaska DEM Funding and Implementation Plan on how to establish funding partnerships for statewide IFSAR mapping.

In November of 2009, Dewberry proposed a solution estimated to cost $77.3M. Large contiguous blocks would be mapped over a two-year period using Fugro’s P-band and X-band GeoSAR sensor (below) to map 23% of the most rugged and densely-forested areas of Alaska. Intermap’s X-band STAR sensors would map the easier 77% of Alaska, and JOA Surveys would survey QA/QC checkpoints throughout the state. 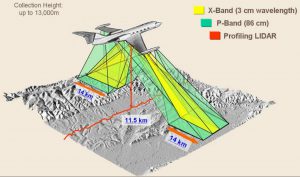 GeoSAR acquires data on both sides of the plane simultaneously in X-band and P-band at a rate of ~300 km2 per minute per band (~400 MB/second).

Fugro’s main advantage was that the GeoSAR’s X-band and P-band sensors provided multiple looks on both sides of the aircraft and used a lidar profiler to provide additional control. Intermap’s main advantage was its capacity from three aircraft and a rigorous product handbook and mature production process that had already produced standard IFSAR products for NEXTMap- USA, NEXTMapEurope, and NEXTMapBritain that exceeded USGS specifications for a mid-accuracy DEM. 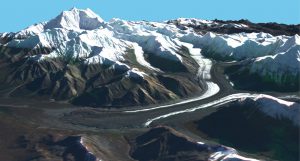 Additionally, Dewberry hired JOA Surveys on speculation to acquire ~$700K of QA/QC checkpoints to have them ready when IFSAR datasets were funded. Without these speculative acquisitions to reduce overall acquisition costs, this project would easily have cost more than $90M.

Throughout this period, Dewberry, Fugro and Intermap made many other initiatives to reduce costs compared with the team’s 2009 cost estimate of $77.3M. By 2018, 98% of the state’s area had been acquired, with only 2% (by area) remaining for 2019 (see image on page 7).

Critically important, satellite imagery now fits the IFSAR DEMs from Fugro and Intermap, so that the IFSAR DEMs can be used to produce accurate digital orthophotos.

In 2015 and again in 2016, the Dewberry team mounted two expeditions (led by Blaine Horner of CompassData) to GPS-survey the official elevation of Denali (20,310’), to install a permanent survey the monument at Windy Corner (63.067111° N latitude and 151.112420° W longitude) near the Denali peak, and to use ground-penetrating radar (GPR) to survey the depth of ice and snow on Denali’s crest (6.1 meters).

In the future, the GPS/GPR surveys of Denali and Windy Corner will help determine if Denali moves due to post-glacial rebound/other factors. Furthermore, Dewberry delivered ellipsoid heights in addition to traditional orthometric heights so Alaska will be prepared for the conversion to a new gravimetric vertical datum in 2022. 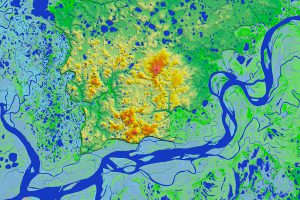 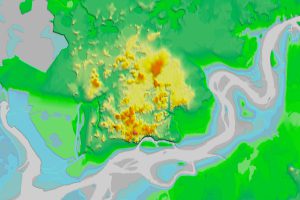 The IFSAR DEM (top) is vastly superior to the prior NED (bottom). With hydrographic features mapped “loud and clear,” the IFSAR is ideal for high-resolution National Hydrography Dataset and NHD+ products.

The images above compare a typical IFSAR cell with the prior NED data; the IFSAR data satisfy all DEM requirements for image rectification, for update of the NHD and NHD+, and for update of transportation features.

In 2019, Dewberry expects to complete the state’s IFSAR mapping for less than $68M, compared with the $77.3M originally estimated—in spite of the inefficient project areas funded each year for the 26 individual task orders.

USGS, the State of Alaska, and other stakeholders are thrilled that hydro-enforced deliverables exceed product specifications and that the team will complete this project well below the estimated budget because of team-wide initiatives to reduce costs.

Throughout the past decade, Dewberry was transparent in its task order cost proposals; USGS knew to the penny what Dewberry paid its subcontractors and what the fees were for its own project management, product development/delivery, and QA/QC. In addition, Dewberry hired a legislative consultant who got the State of Alaska to fund more than $13M and got the Alaska Congressional delegation in Washington D.C. to add many millions of dollars annually to the USGS budget, specifically for Alaska mapping. This was truly a collaborative private/public partnership that was key to project success.