Small satellites are changing who dominates the field of satellite remote sensing. Move over military and government policy and regulation. Make way for private companies and even the public.

There are big changes afoot in the satellite remote-sensing field: improved technology as well as regulatory shifts enabling the application of this technology (see “New Markets for Satellite Imagery” in the September 2014 issue). Here I look at current trends in—as well as future possibilities for—satellite remote sensing through the eyes of three industry players. I start on the ground, where satellite data is received, then liftoff into orbit to look at satellites themselves, and finally take an inside look at how sats get into space: launch platforms. 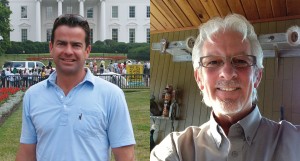 For a look at the subject from the viewpoint of a remote sensing satellite data provider, I talked with Michael McCarthy, general manager for GeoNorth, and Bob Johnson, their director of marketing. McCarthy has an extensive background in satellite remote sensing, having worked for both DigitalGlobe and Spatial Energy. Johnson’s work includes robust GIS experience.

GeoNorth, an Alaska Native Corporation, is the first and only private company in the United States to own and operate its own Direct Receiving Station (DRS) for the full constellation of Airbus satellites (SPOT 5, 6, and 7, Pleiades 1A and 1B, TerraSAR-X, and TanDEM-X).

xyHt: What do you see as the important trends in satellite remote sensing?

GeoNorth: There are truly dynamic changes in global thinking and global markets with regards to remote sensing. For instance, radar imagery is where optical imagery was 15 years ago. Applications are becoming more widely tried and tested as the technology becomes more intuitively delivered—and more readily available—as with a commercial imagery provider.

We also agree with the notion that space policy and regulation may be becoming less relevant to the governing of remote sensing as data is being used to develop powerful public and commercial applications.

How are these trends affecting the geospatial industry?

It used to be that enterprises needed help organizing their geospatial information. Now, they are looking for ways to help organize their information geospatially, as GIS applications continue to become more engrained in an ever-increasing amount of business applications. This has been the case over the last 10-15 years—and will continue on for many years to come as the technology also becomes more and more user friendly and easier to understand, comprehend, and apply.

What do you think the future, say five years from now, holds for the field of satellite remote sensing?

We will continue to see an increase in demand of more data (information), both timely and accurate as an integrated part of the important workflows inside most enterprise-wide environments. Not only will demand continue to rise, but also demand for accurate and current data, as near real-time as possible. Commercial imagery providers will be filling those roles more and more over the coming years.

For the view of a remote sensing satellite manufacturer, I talked with Doug Gerull, the chief operating officer of Surrey Satellite Technology US. Gerull’s background includes cofounding DigitalGlobe, and he is currently directing Surrey’s efforts to develop its U.S. manufacturing capacity and cultivate markets for small satellite technology within the United States’ commercial, civil, and Department of Defense sectors.

What do you see as the important trends in satellite remote sensing? 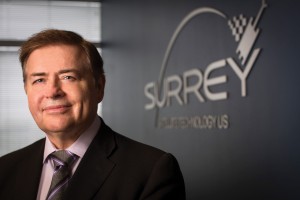 Doug Gerull: There are a large number of important ones right now. Capabilities are improving in every possible area, whether they’re basic resolution improvements or spectral improvements such as with WorldView 3 or compact radar with NovaSAR.

How are these trends affecting the geospatial industry?

The opportunities the geospatial industry has to creatively use the emerging new data (and data types) to provide new products and solutions are arguably better than they have ever been. All of the traditional parameters such as resolution and sensed wavelengths are still getting better.

Regarding launch vehicles, is the current political situation with Russia affecting Surrey Satellite?

No impact at the moment. Our next scheduled U.S. launch is our OTB (Orbital Test Bed) satellite on the SpaceX Falcon Heavy, and we have a three-satellite 1-meter resolution constellation going up very shortly on an Indian PSLV (Polar Satellite Launch Vehicle).

Surrey has built up a record of 43 missions using almost every launch provider, and we often have options others do not. However, it is clear that any situation that diminishes the opportunities to access space is not a great thing for the industry, or for society.

What do you think the future, say five years from now, holds for the field of satellite remote sensing?

We are probably a ways away from being able to reach into our computing devices and pull up a real-time 1:1 scale model of the planet for personal examination and commercial use. But that would be cool—and in five years it’s not hard to imagine it being possible—for some discrete areas, with some focused sets of data, and from combined satellite, airborne, and terrestrial sources.

For business analytics especially, and for almost everything generally, improving the timeliness—right up to real-time—makes every data type more valuable. This is a key area where satellites can help foster geospatial product innovations. 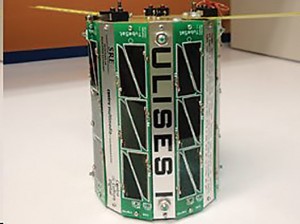 Satellite sensing technology is continuously improving both in terms of quality of imagery and expanded types of sensing. Note that in both of the previous interviews the possibility of real-time sensing is something the remote sensing profession will look forward to in the near future.

What’s more, it’s interesting that, thanks to the forward march of microminiaturization, the size of satellites is shrinking. Thus we see the small sat trend. Smaller satellites’ diminished cost, size, and weight factors expand the democratization of satellite sensing.

Surrey’s OTB satellite will be playing an important role in supporting the advancement of satellite sensing. The idea behind the OTB satellite is to offer aerospace organizations a low-risk opportunity to test new subsystems and payload technologies on an actual low Earth orbit mission while sharing the cost of development and launch. The rideshare model behind OTB is an economical way to quickly test new equipment and generate in-orbit data in space. 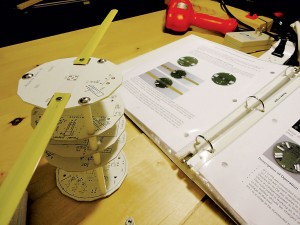 There is another factor that Gerull alludes to: the privatization of space and its impact on satellite sensing. As he noted, Surrey will be using SpaceX’s new Falcon Heavy to launch its orbital OTB satellite in 2016. It’s hard to pay any attention to the space industry and not be aware of the successes of Elon Musk’s SpaceX.

SpaceX is not the only player though. Interorbital Systems has claimed an interesting piece of real estate: the intersection of nano sats (specifically CubeSats and TubeSats) and private launch platforms. Founded in 1996, Interorbital
is now bringing LEO (low Earth orbit) satellite technology to private individuals with its TubeSat personal satellite kit. The $8,000 kit also includes launch on the company’s NEPTUNE 9 launch vehicle. The NEPTUNE 9 rocket is value-engineered to eliminate a whole raft of expensive, complicated, and failure-prone technology. Because it is designed to be launched from a mobile platform, expensive spaceport launch fees (which run into the millions of dollars) are likewise eliminated.

For a look at what Interorbital brings to the small sat table, we talked to Randa Relich Milliron, the chief operating officer of Interorbital Systems.

How is the small sat phenomenon, including CubeSats and TubeSats, changing the landscape of satellite remote sensing? 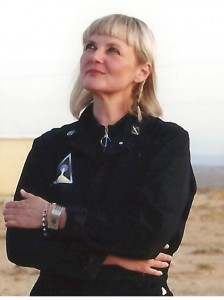 Randa Milliron: When the enormous price barriers that once characterized the industry are removed, the character of the players changes. What was once the domain of the military and government only is now an “open source” landscape, or more accurately “spacescape,” in the best possible way.

Of the 90 small sat payloads we have manifested for our first three sold-out orbital launches, at least 20% of those are some sort of Earth observation or remote sensing experiments. The builders of these and our other satellites range from middle schools, military academies, NASA, art and music groups, space agencies, to citizen scientists, and educators—a full-spectrum orbital functionality at an irresistibly affordable price.

We see at least 60 new companies emerging from the people and organizations on our manifest. Small sats and our low-cost launch program are the enablers for all the bright, cash-strapped experimenters whose wildest space dreams can now be made real. We are honored to be part of this new wave of space science.

What role do companies like Interorbital Systems play in this new wave of remote sensing?

With our spartan [radically simplified] rockets and mobile spaceports, Interorbital provides the gateway for on-orbit experimentation. Our TubeSat and CubeSat kits serve as basic introductory satellite building courses, with hardware and launch included in the modest cost, that give individuals the ability to make their own personal satellite.

Our kits are currently in use as the center of curricula in at least 25 universities and K-12 schools worldwide. Interorbital’s mission is this: We provide the on-orbit platform—you write the app!

Doctor Who fans should note that Interorbital Systems is the TubeSat kit and satellite launch service provider for the “TARDIS in Orbit” project. To commemorate the 50th anniversary of the classic science fiction TV series, the father-daughter team of Robert and Alex Doyle implemented a Kickstarter campaign whose goal is to put a TARDIS replica into low Earth orbit. Project motto: “Keep calm and orbit on.” 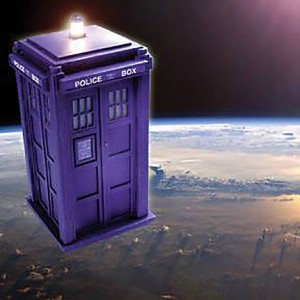 Artist’s concept of what the TARDIS nano sat will look like in orbit. Credit: TARDIS In Orbit project.

As humorous as this project seems, it illustrates a serious point. The democratization of space is enabled by the privatization of both satellites and launch platforms as exemplified by Surrey Satellite Technology, SpaceX, Interorbital Systems, and many others. It was not so long ago that satellite building and launching was strictly the domain of nation-states. Now, not only are smaller nations and their space agencies building and launching small sats, but even private individuals like the Doyles are getting in the satellite business, albeit for the TARDIS project, not in a strictly scientific way.

On the launch side, there’s a serious geopolitical aspect to the privatization of space. The Russian Soyuz launch program is a low-cost provider that many satellite companies use. In response to recent sanctions against Russia by the United States and Western nations, Russia’s deputy prime minister suggested that “the United States deliver their astronauts to the ISS using a trampoline.”

While analysts say it is unlikely that the Russians will kick off U.S. astronauts, and by extension satellites, from the Soyuz platform, the underlying tensions remain, and who knows what the future holds. SpaceX’s founder Elon Musk tweeted, “Sounds like this might be a good time to unveil the new Dragon Mk 2 spaceship that @SpaceX has been working on w @NASA,” then, “No trampoline needed.”

Changes on Every Front

The arena of satellite remote sensing is changing on virtually every front. Legislatively, the approval for providers of satellite sensing data to sell higher resolution imagery will encroach on the territory of aerial mapping providers and have a significant financial impact on that profession. Technologically, the advent of the small sat phenomenon will promote the democratization of remote satellite sensing and further place downward pressure on pricing. No longer is satellite remote sensing limited to nation-states; now businesses, academics, and even citizen-scientists and hobbyists are benefitting from the trend.

The small sat trend will expand utilization rates and increase geospatial applications into areas and industries that had previously not even imagined using this type of data. In the near future we can even look forward to real-time satellite remote sensing, which will be a boon to virtually every user of this technology.

Finally, the privatization of space, including satellites and launch options, will continue to lower the cost of, and thereby expand, the democratization of satellite remote sensing. Exciting times ahead!