Above: Luck Stone flies one of their UAVs over their Bealeton quarry plant in Virginia.

Luck Stone, a large mining and aggregates company, significantly improves their workflows and planning with UAVs and Delair’s UAV platform.

In the mining and aggregates sector, half of your success is in the planning. Being prepared to have inventory available, shipments ready, and sales expedited accurately and efficiently can improve productivity and profitability. And being ready for peak seasons is crucial to making money.

When your inventory process is used by the company throughout the year for production and sales-planning as well as for year-end tax reporting, even more money is on the table. The flipside, not having the capacity to tweak production or accurately forecast inventory, can mean lost sales or even lost customers.

Recognizing this fact, and in an effort to see if its steady business operations were to improve with a different tack, one business tried a new surveying process that used UAVs instead of manned airplanes. 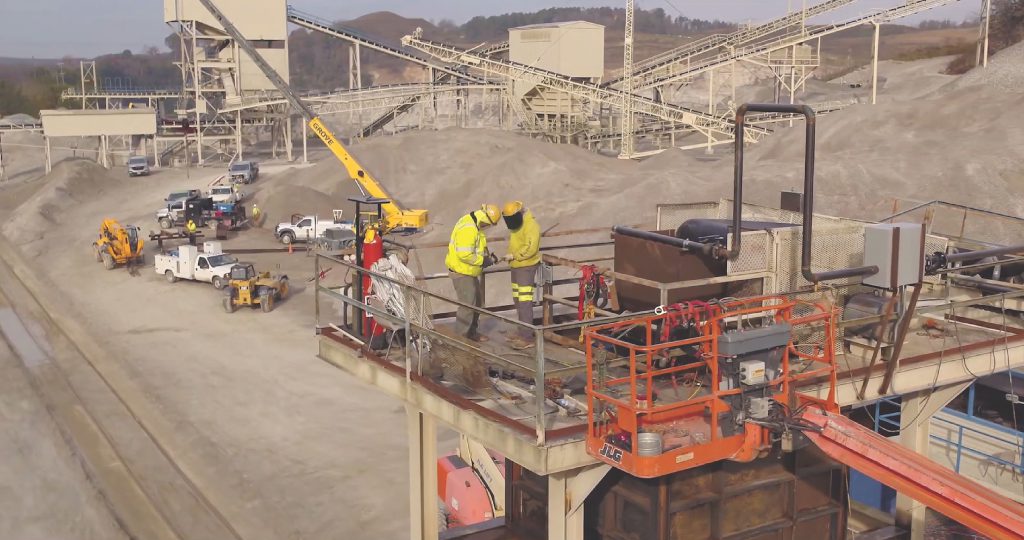 An aerial view of a construction project at Luck’s Boscabel quarry near their HQ outside Richmond, VA

Luck Stone is the nation’s largest family-owned and -operated company producing crushed stone, sand, and gravel. Prior to using UAVs, the company had been inventorying its saleable product just twice annually—in the fall and spring. With locations throughout the Southeast, Luck Stone (Luck) had moved forward in its business processes, and it was time to evaluate its inventory process.

In the mid-1990s Luck switched from surveying its inventory manually to having the process done by airplane; they outsourced all the mapping work. Still, it wasn’t enough to do the job accurately because the nature of their business (with a constantly changing production site) meant that more frequent mapping would require more accurate inventories.

Until 2015, a manned airplane was as far as the company’s surveying process had progressed. But with nearly 1,500 stockpiles on its property, Luck’s inventory process was complicated due to its worksites’ malleable natures and vast scales. Keeping track of product was a bit of a moving target, informed partly by guesswork. 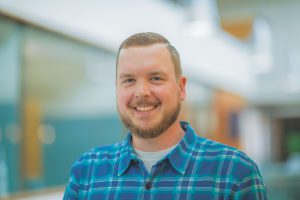 John Blackmore, GISP is the survey and mapping supervisor at Luck Stone.

“Say for example, we’d fly [a manned airplane inventory survey] in May, and in June a salesperson wants 60,000 tons of product for a customer. We didn’t need data to confidently say ‘Yes’ to our customers,” explains John Blackmore, mapping and surveying supervisor for Luck.

That meant the lack of accurate inventory data led Luck into poor business practices like over-producing or not bidding jobs in order to ensure they could deliver for their customers.

“A mine site changes daily; we’re changing our pit on a daily basis. The challenge of mapping with planes is that they’d fly all of our sites at once, and they might delay the flight because of weather concerns,” Blackmore says. “We didn’t know accurately how much product we had.”

Part of the problem with the old inventory process done by manned airplane was the slow turnaround of data after a flight.

“We’d get a raw image back from the pilot five to seven business days after the flight. Often, it would take a month or two to get the 3D data back,” Blackmore says.

But when operations are changing a site on a daily basis, data several weeks old, or older, will not do.

“We’d often send a team member out to map the changes [to the site since aerial mapping had been done], and input changes to the map,” Blackmore says. “Sending people out to walk along the edges and crest of our pit, with its steep slopes and heavy equipment traffic, is a safety issue, too.”

Being aware of the potential advantages of surveying a site with an UAV, the company looked into the technology, and in 2015, Luck officials decided to give it a try. They chose Delair for their test run with UAVs.

Luck found the technology to be more flexible than using manned aircraft for surveying. Now, Luck can get processed data from a drone flight back from Delair in two business days.

“One of the major appeals of the Delair platform is the mining-specific analytics that are performed on request,” Blackmore says. “They can provide information about the haul road widths, berm heights, and roadway slopes, in a visual display. Parameters can be set where red is too steep, yellow is too shallow, and green is the ideal slope we want. This provides users with a visual representation of favorable conditions.

“Why is the slope so important? We drive loaded haul trucks up and down that slope each day, hundreds of trips. If we can save pennies on fuel each trip, that can be lots of money at the end of the year!” 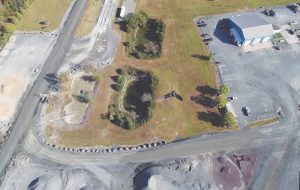 Luck bought a starter aircraft when it began using a drone and soon upgraded to a SenseFly eBee Plus RTK, which has a live RTK GPS sensor in the aircraft; the PC flying the bird is connected to the Trimble VRS Network for real-time positioning, Blackmore explains.

“We started the drone program in 2015-16 and was the original pilot for all flights. In late 2016, we hired a full-time drone pilot who now handles the majority of flights,” Blackmore says.

In terms of keeping track of the business, in order to make better decisions to increase profitability, UAVs have been a major boost for Luck Stone.

“We now can confidently say yes to our customers. With UAVs, we can plan our own logistics, versus outsourcing the [mapping] work. And with UAVs, we can fly under the clouds,” Blackmore says.

“Also, some of our stockpiles are right on the edge of a tree-line, which makes it hard to inventory accurately—UAVs are helpful in that situation.” 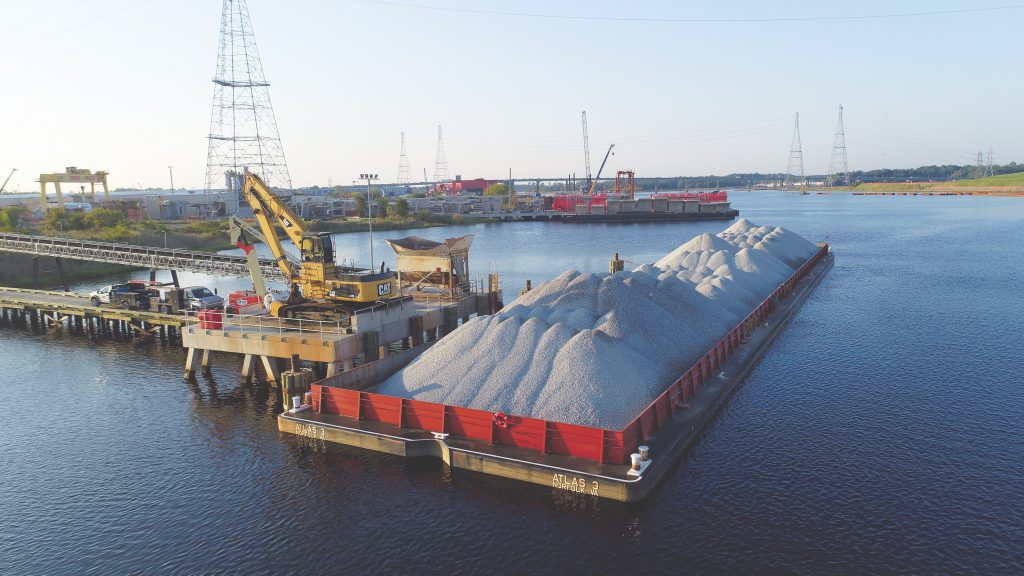 A full barge is unloaded at Luck’s Gilmerton distribution yard in Norfolk, VA. Construction aggregates are barged from the Richmond area to their customers in Hampton Roads.

Now, some of Luck Stone’s smaller distribution sites can be surveyed—with data returned to the company—in just a day. Its larger sites, comprised of several hundred acres, can be surveyed and have data processed and delivered in only two days. That promptness helps Luck Stone to be a go-to company in its field.

These days, the company is taking advantage of its new surveying process, performing quarterly surveys of its inventory versus doing just two inventories yearly in the past.

And Luck Stone currently is using the data it has gathered and compiled from UAV-based inventory surveys to make more-accurate forecasting predictions. The information is helping the company plan for upticks in business.

It’s also giving Luck’s managers an insightful way to look at historical trends in order to determine what they should be producing and when, to most accurately meet market demands.

Because of the increased frequency of inventory surveys plus the enhanced power of the digital information processed by Delair from those UAV flights, Luck Stone has changed its business processes to account for the permanent use of UAVs for surveys.

“We’re having some conversations now about what our contingency plans are if our UAVs break or our [UAV] pilot can’t work. It’s now a critical business process that we rely on,” Blackmore says.